The NDRF team yesterday facilitated the birth of a baby girl on its boat in Madhubani district. 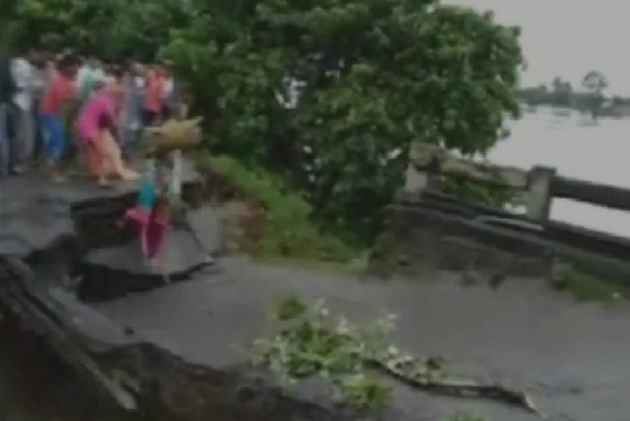 The flood situation in Bihar worsened on Friday as the death toll mounted to 119 due to the deluge, which has affected nearly 98 lakh people in 16 districts, forcing postponement of examination and cancellation of trains.

The toll due to the floods triggered by rains in Nepal and northern parts of the state was 72 yesterday, and 73.44 lakh people in 14 districts were hit.

Saharsa and Khagaria were the latest districts to be affected during the day, Special Secretary in the Disaster Management Department, Anirudh Kumar, said.

Araria district accounted for 23 deaths, followed by Sitamarhi (12), Kisanganj, East Champaran, West Champaran and Supual (11 each), Madhubani and Katihar (7 each), Madhepura and Purnea (5 each), Darbhanga and Saharsa (4 each), Gopalganj and Khagaria (3 each) and Sheohar (2), he said.

Though the Met office has forecast possibility of rain in southern Bihar for one more week, there would be less rainfall in Nepal and northern parts of Bihar.

Mahajan said hospitals have been directed to maintain a sufficient stock of anti-snake and anti-rabies injections.

The chief minister took feed back about flood relief operation in West Champaran from officials at Bettiah helipad and inspected a place where food packets were being readied, an official release said.

Amrit said that 3.59 lakh people have been rescued to safer places. Out of them, 2.13 lakh were put up in 504 relief camps in different places while 1,112 community kitchens are feeding 3.19 lakh flood victims, he said.

Food packets are being airdropped in inundated areas while in places where flood waters have receded they are being supplied through panchayats, the officer said.

Mahajan said that 'boat ambulances' are also being operated by the administration.

In case of shortage of doctors in primary health centres, the administration would hire private doctors, he said.

Mahajan, also the Principal Secretary of Education, said that examination scheduled to start tomorrow in Bihar University, Muzaffarpur, has been postponed.

Principal Secretary, Road Construction, Amrit Lal Meena said that 124 roads, including national highways, have been damaged in the floods.

Rural Works Department Principal Secretary Bipin Kumar said that 222 hand pumps have been disinfected in Araria and 219 in Kisanganj so that citizens could get purified drinking water.

Many trains have been short-terminated, it said.

Commandant of 9th battalion of the NDRF, Vijay Sinha, said that the force's personnel rescued 25 pregnant women, 55 animals and saved eight from drowning.

The NDRF team yesterday facilitated the birth of a baby girl on its boat in Madhubani district.