Meet Biplab Kumar Deb Who Could Be Tripura's Next Chief Minister

In two years, he helped the BJP perform unexpectedly well in the state. If the party wins, it is quite likely that Deb could be the next chief minister of Tripura 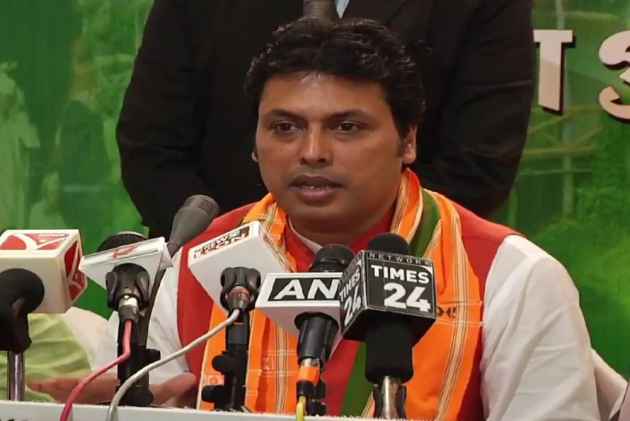 The BJP-Indigenous People's Front of Tripura (IPFT) combine is cruising towards historic victory in Tripura, ending the 25-year uninterrupted rule of the CPI(M)-led Left Front in the state.
Election in 59 seats for the 60-member Assembly was held on February 18. Polling was countermanded in one seat due to the death of a CPI(M) candidate. BJP state president Biplab Kumar Deb, 48, was leading from Banamlipur seat. He was appointed as the state president of the Bharatiya Janata Party January 7, 2016.
In two years, he helped the BJP perform unexpectedly well in the state. If the party wins, it is quite likely that Deb could be the next chief minister of Tripura.
“He is the front-runner for the CM’s post and our pre-election surveys showed he had a popularity rating higher than Sarkar,” a BJP general secretary told Hindustan Times.
Here’s all you need to know about him:
Hailing from Udaipur in Gomoti district of Tripura, Deb had moved to Delhi after completing a BA from Tripura University for his higher studies. Deb had replaced Sudhindra Dasgupta, the longest-serving president of the party in the state, to become the BJP state head.
Deb was also a former Rashtriya Swayamsevak Sangh (RSS) volunteer and previously campaigned in elections to the Tripura Tribal Areas Autonomous District Council.
Sunil Doedhar, the BJP’s prabhari for Tripura, was Deb’s trainer in the RSS and the veteran, KN Govindacharya, his mentor in the outfit.
HT reported that Deb also worked as an assistant to Ganesh Singh, the BJP’s MP from Satna Lok Sabha seat in Madhya Pradesh, before moving to Tripura in 2016 as the party president there. Deb’s wife is a deputy manager with the Parliament House branch of the State Bank of India and has they have two children. The BJP’s decision to send Deb to Tripura was a calculated move. Not only he was young, but also a local face.