Biplab Deb was declared the state president of the BJP on January 6, 2016. He replaced Sudhindra Dasgupta, the longest-serving chief of the party in Tripura. 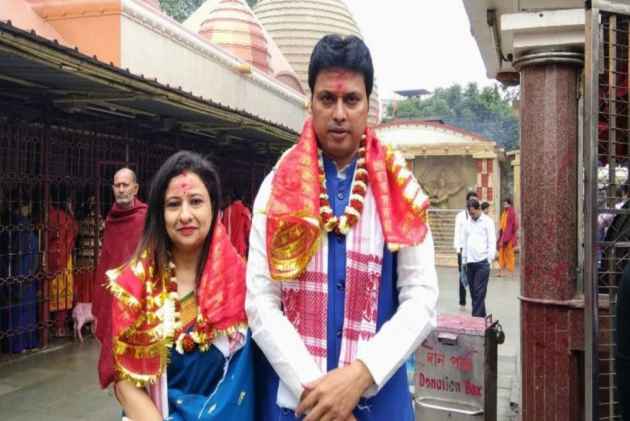 Tripura BJP president Biplab Deb has been named the next chief minister of the state, while Jishnu Debbarma, convener of the state BJP’s Janajati Morcha or tribal unit, will be Deb's deputy, the party announced on Tuesday.

Newly elected MLAs of the BJP and its ally, the IPFT, met in Agartala on Tuesday to elect their leader amid hard bargaining by the tribal ally, which demanded "respectable" positions in the new ministry.

Deb on Monday said the meeting would be held at the state guest house in the presence of Union minister Nitin Gadkari. BJP spokesperson Mrinal Kanti Deb said Union minister Jual Oram would also be present.

The swearing-in of the new ministry is likely to be held on March 8 at the Swami Vivekananada Maidan in the heart of the town.

Born in a middle class family at Rajdhar Nagar village in Gomati district on November 25, 1971, Biplab Deb completed his graduation from Udaipur College in the state in 1999.

His father Haradhan Deb was a local leader of the Jan Sangh.

Biplab Deb left for Delhi soon after his graduation to join the RSS. The 48-year-old leader served the right-wing organization for around 16 years, under the guidance of Gobinda Acharya and Krishnagopal Sharma, two prominent Sangh leaders.

In 2015, he returned to Tripura and assumed the charge of Central Jan Sampark Pramukh for the BJP.

Biplab Deb was declared the state president of the BJP on January 6, 2016. He replaced Sudhindra Dasgupta, the longest-serving chief of the party in Tripura.

His wife Niti is an officer at State Bank of India. The couple has a son and a daughter.

Biplab Deb had on Sunday said he was ready for the top job.

On the other hand, Debbarma, an old BJP hand,  is part of Tripura’s erstwhile royal family, and known to have a sizeable following among the state’s indigenous population. However, he is not yet a legislator. Elections in his constituency, Charilam, have been postponed because of the death of the Left candidate.

The BJP demolished the Left citadel in Tripura, winning a two-third majority with ally IPFT, and ending 25 years of uninterrupted rule of the CPI(M)-led rule in the state.

The BJP won 35 of the 59 seats that went to polls in Tripura and its ally, the Indigenous People's Front of Tripura (IPFT), bagged eight seats.

Polling was countermanded in one seat due to the death of the CPI(M) candidate.

The IPFT on Monday mounted pressure on the BJP, saying it would support the new government from outside if it was not given "respectable" positions in the ministry.

IPFT chief NC Debbarma also demanded that the chief minister be chosen from the indigenous MLAs.

It is a tradition in the northeast that a chief minister is selected from the indigenous community, he added.

The IPFT would also seek a separate block for its MLAs in the Assembly if it was not given "respectable" positions in the cabinet, he said.

Asked what he meant by respectable positions, Debbarma said it meant proportionate representation of IPFT MLAs in the cabinet and allocation of major departments to them.

"There is an apprehension that we may not be given proper representation in the cabinet and important portfolios would not be allocated to us as the BJP, the major constituent, has alone secured 35 seats," Debbarma told PTI.

The BJP and the IPFT, he said, had fought the elections in an alliance with the sole target of defeating the CPI-M and it was achieved.

"Now if we are not given respectable positions, we will support the government from outside," he said.

The BJP leadership did not make any comment on the IPFT's demand.