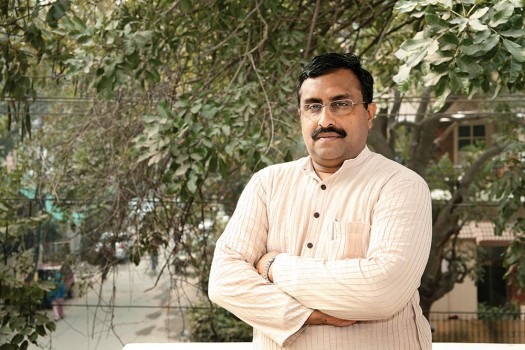 The BJP today credited the favourable results in Tripura, where the party is leading in majority of seats, to Prime Minister Narendra Modi and people of the state's desire for change.

The BJP was leading in 29 seats while its ally Indigenous People's Front of Tripura (IPFT) was ahead in eight seats in Tripura. The ruling CPI(M), which is power for the last 25 years, was ahead in 17 seats, according to the trends available.

"The prime minister had addressed four rallies in Tripura. He had worked very hard and continuously monitored our campaigning. The credit must go to him," BJP general secretary Ram Madhav said at a press conference here.

He said people of Tripura has also positively responded to the BJP's call for defeating the CPI-M-led government, which has been ruling the state for more than two decades.

The BJP leader also praised the CPI-M for its "spirited fight" during the election and said but the people wanted a new government.

Elections in 59 seats, out of the 60-member Tripura Assembly, were held on February 18. Election in one seat was countermanded due to the death of the CPI-M candidate.

Madhav also said in Nagaland, the BJP and its alliance partner Nationalist Democratic Progressive Party (NDPP) has been performing well as per the initial trends.

"We hope to form a government with our pre-poll ally Nationalist Democratic Progressive Party," he said.

Elections in 59 seats, out of 60 member Nagaland Assembly, were held on February 27. In one seat, former chief minister Neiphiu Rio, was declared winner unopposed.

As per the initial trends available for 39 seats, the BJP and its ally are leading in 17 seats while the Naga Peoples Front is leading in 18 seats.

Meghalaya, Madhav said, is heading for a hung Assembly and the BJP will work for forming a non-Congress government there.

As per the available trends for Meghalaya, the Congress won two seats and was leading in 19, the National People's Party is leading in 18 seats, BJP in four seats and others in 12 seats.

Elections to 60-member Meghalaya Assembly were held on February 27.