Congress' Randeep Surjewala said Rahul Gandhi, as leader of the principal opposition party, "will continue to show the mirror of truth to an "arrogant and authorotarian" government. 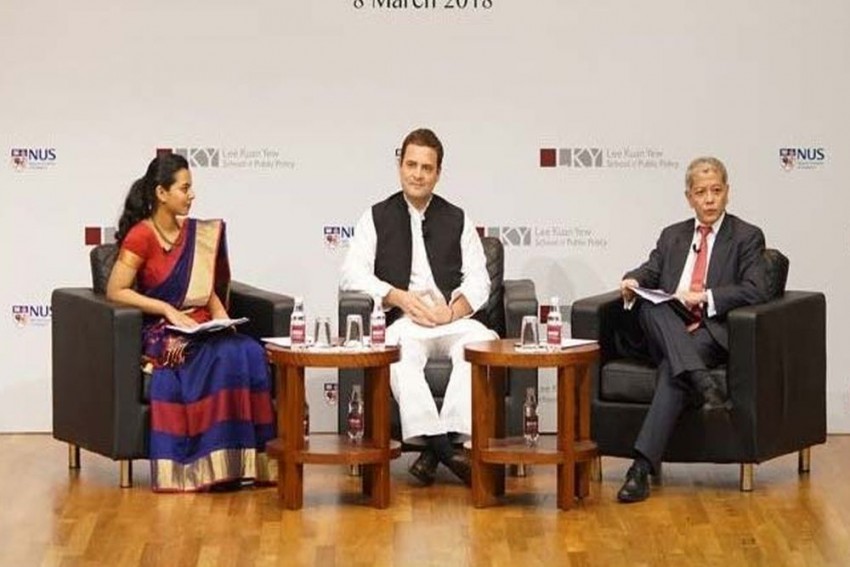 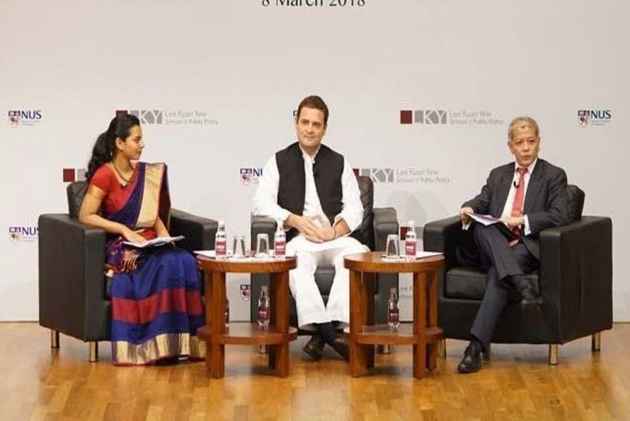 The Congress and the BJP were locked in a slugfest on Friday over Rahul Gandhi's address at a Singapore university where he assailed the saffron party of pursuing divisive politics.

After the BJP criticised Congress president Gandhi for "insulting" India abroad with his statement, the Congress hit back, saying it was Prime Minister Narendra Modi who started it and "abused" the country's 70-year-old history.

Congress communications incharge Randeep Surjewala said Rahul Gandhi, as leader of the principal opposition party, "will continue to show the mirror of truth to an "arrogant and authorotarian" government.

He said, "Our country's prime minister is such a person who abuses the country's history of 70 years and says that he felt ashamed being an Indian till he became the prime minister. He had said that he claimed to be hiding from hunger and poverty."

BJP spokesperson GVL Narasimha Rao hit back, saying Rahul Gandhi represents everything retrograde about the Congress' "dynastic" politics and that Modi enhances the country's prestige during his visits abroad while Gandhi diminishes it.

"Modi is a self-made man who has emerged on the top of national politics from humble beginning while Gandhi represents everything retrograde of his party's dynastic politics," he said.

The prime minister represents meritocracy and people appreciate his journey, while people see Gandhi as an "undeserving dynast", who only boasts about his family and has little to show by way of any personal achievement, Rao said.

What people get to see Gandhi is his "incompetence and lack of intellect", Rao said.

The Congress chief also courted a row during his visit to the Lee Kuan Yew School of Public Policy, National University of Singapore, when he reportedly "dodged" a question by an economist about lower per-capita income of the country whenever his family was in power.

"With political discourse hitting new lows everyday, Congress President Rahul Gandhi shows how to gracefully handle detractors and call their bluff," said the Congress, on its twitter handle while referring to the economist's question.

However, Prasenjit K Basu, the economist who asked the question, claimed the Congress edited the video of the event and put out an unedited version which purportedly showed Rahul did not take the question.

"This is a classic fake-news video. You are using my image to falsely advertise your politician, showing a sequence of events that did not occur. Withdraw this false video, or prepare for prosecution in Singapore's courts!," Bose tweeted.

Reacting to the development, BJP's Narasimha Rao said, "You have inherited the mantle as a dynast. So, you will be asked questions of your family's poor track record in office and its 'poverty perpetuating model' for promoting political interests. Post 2004, I'm glad you are admitting your role in scam-ridden governance."