BJP govt has brought development in every corner of UP, will return to power: Anurag Thakur

He alleged that the development work took a hit under the SP government as it was busy protecting goons. 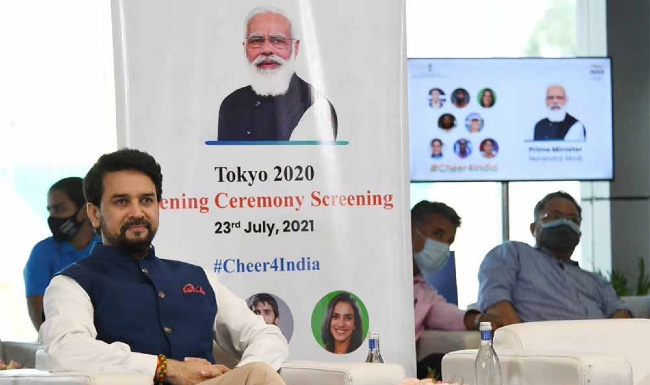 Union Minister Anurag Thakur on Tuesday said the BJP will return to power in Uttar Pradesh with more than 300 seats on the back of a positive public mood due to action against "gundaraj", "unprecedented" development and public welfare schemes under the Yogi Adityanath government.

Thakur, who was the chief guest at the first edition of the Kashi Film Festival here, said people migrated from Uttar Pradesh due to rampant "gundaraj and mafiaraj" in the state during the tenure of the previous Samajwadi Party (SP) government and now they are returning seeing the work of the Adityanath dispensation.

Women in Uttar Pradesh can now step out of their houses in the dark and businessmen have developed confidence due to the Adityanath government's action against "gundaraj and mafiaraj", the information and broadcasting minister told reporters.

"We will return to power with more than 300 seats due to a positive public... we brought development to every nook and corner of the state even after Covid-induced problems in the last two years," he said.

Assembly polls in Uttar Pradesh are slated to take place early next year.

Responding to a question on the women-centric approach of the Congress for its Uttar Pradesh assembly poll campaign, Thakur said the Sonia Gandhi-led party had joined hands with those who inflicted atrocities against women in the last assembly elections.

On reports about resentment in the Brahmin community, Thakur said the BJP government at the Centre and in the state works on the principle of "sabka saath sabka vikas". He said that "4.5 lakh youths got employment in the government sector and 3 lakh got contractual basis without any differentiation on the basis of caste".

Thakur said that despite the Covid pandemic, India has achieved a GDP growth rate of 8.5 per cent and it will be one of the fastest growing economies in the world by the end of the last quarter.

The Union minister, who is also the BJP's Uttar Pradesh election co-incharge, said that in west Uttar Pradesh, his party will win more seats than in the last elections. "There are lakhs of people who got a pakka house, power connection, benefit under the Ayushman Bharat scheme, and free ration ... the poor evaluate the benefit of even a rupee," he said.

"Social welfare schemes and the improvement in the law and order situation are two other major factors which will bring the BJP back in power," he said. The minister added that the BJP will return to power in Uttarakhand as well.

Besides Uttar Pradesh and Uttarakhand, assembly polls will be also held next year in Punjab, Goa and Manipur.