"I wish to put up a board proclaiming no entry for uncle Nitish Kumar here, at this bungalow," Tej Pratap Yadav told reporters on Sunday. 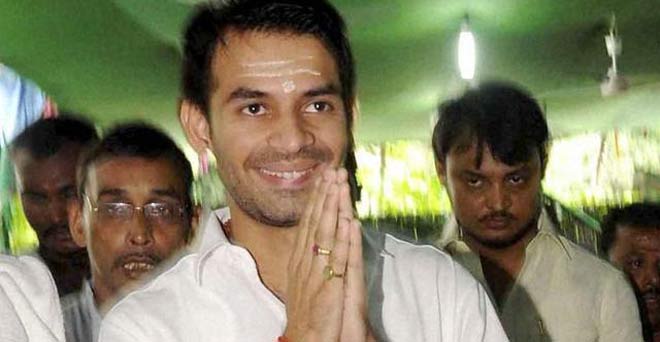 RJD leader Tej Pratap Yadav's comment that he intended to put up a "no entry" board at his mother Rabri Devi's house for Bihar Chief Minister Nitish Kumar, earned a sharp attack from the ruling JD(U)-BJP coalition on Monday .

"I wish to put up a board proclaiming no entry for uncle Nitish Kumar here, at this bungalow," Tej Pratap Yadav, on Sunday told reporters outside former Bihar chief minister Rabri Devi's official residence on 10, Circular Road.

The former state health minister and elder son of party patriarch Lalu Prasad Yadav, was responding to a question about a statement made by his younger brother Tejashwi Yadav last week wherein he said that the door for Kumar, who is said to be growing uncomfortable in the BJP-led NDA, to return to the Grand Alliance was closed.

This was prompted by reports of Nitish and Lalu's aides talking to each other, leading to speculation that the two parties might get back together.

The JD(U) national general secretary K C Tyagi said the party had never asked to rejoin the Grand Alliance in the first place.

"It appears the two brothers are competing to prove who can be more boorish. Our reservations about dynasty politics are turing out to be true," Tyagi told PTI over phone.

Tyagi said the JD(U) would consider it "insulting and demeaning" to be associated with "dirt like RJD."

"Nitish Kumar severed ties with the party taking a principled stand against corruption. It would be demeaning and insulting for us to ever seek a realignment with the RJD," he said.

Tyagi asserted that the brothers need not harbour any notions because Kumar attended Tej Pratap Yadav's wedding and enquired about Lalu Prasad's health.

"They also need to learn to stay within their limits. Only recently, former Union minister Shakeel Ahmed Khan had pointed out that a decision on including any party into any alliance that includes the Congress would be taken by Rahul Gandhi and not by political pygmies," Tyagi said.

Deputy chief minister of Bihar and BJP leader Sushil Kumar Modi took on the brothers in a tweet.

He said Tej Pratap Yadav had "given up decency" in speaking about Kumar, "to whose goodwill he and his brother owed their entry into the state assembly."

The people of Bihar will show a no entry board to the RJD in the next assembly elections, Modi said in his tweet.

Tej Pratap Yadav has courted controversy many times in the past due to his tendency of shooting from the hip.