BJP Looks To Retain Power In Gujarat, Set To Out Congress In Himachal Pradesh

The Congress is doing better than expected in Gujarat, given that it had won 61 seats in the 2012 elections while the BJP had got 115. 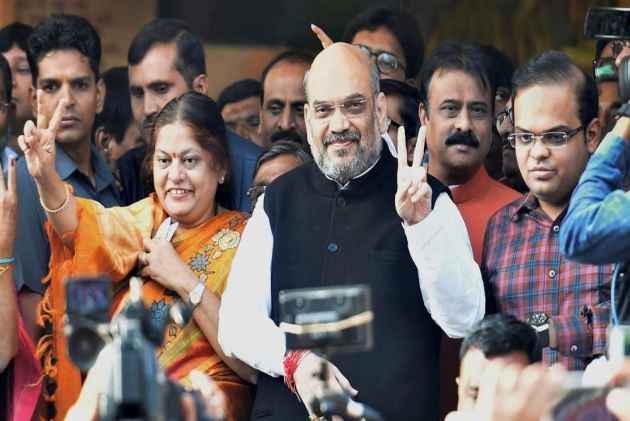 The BJP on Monday headed for a victory in Gujarat to retain its nearly two-decade stranglehold over power, and also stayed on course to oust the Congress in Himachal Pradesh, according to most counting trends.

"Development is the mantra of today's polity. And therefore people are with Modiji," human resources minister Prakash Javadekar told reporters.

"We will get majority in both states and form governments," Union home minister Rajnath Singh said, as the counting trends from most seats in the two assemblies were being updated by the Election Commission.

At the same time Congress is doing better than expected in Gujarat, given that it had won 61 seats in the 2012 elections while the BJP had got 115.

Gujarat chief minister Vijay Rupani, who was earlier trailing after the count of postal ballots, won over Congress' Indranil Rajyaguru in Rajkot-West seat.

Seeking a sixth straight term in Gujarat, the BJP was ahead in 101 seats while the opposition Congress is leading in 74 seats, the Election Commission(EC) trends available for 181 of the 182 seats at stake showed.

Early trends had indicated a neck and neck race in Gujarat, which gave slight jitters to BJP workers. But soon the BJP pulled ahead and the numbers began to conform with exit poll results.

The EC figures showed the NCP, Bhartiya Tribal Party and an independent candidate leading in five seats together.

Gujarat Deputy Chief Minister Nitin Patel is trailing from Mehsana against Congress candidate Jivabhai Patel by 3,000 votes. Mehsana was the epicentre of the Patidar reservation agitation.

Congress' Alpesh Thakor is leading in Radhanpur seat against Lavingji Thakor of BJP.

The elections were held on December 9 and 14, after a deeply acrimonious campaign, which was dominated by a face-off between Prime Minister Narendra Modi and Congress president Rahul Gandhi.

The BJP has won every election since 1995 in the home state of Modi and BJP chief Amit Shah. However, it was out of power for a couple of years due to party infighting and rebellion by Shankersinh Vaghela. BJP came back to power in 1998, and has ruled uninterrupted since then.

Congress veteran and six-time chief minister Virbhadra Singh and his son Vikramaditya Singh are leading from Arki and Shimla(Rural) respectively, according to early trends.

Main rivals BJP and Congress contested all the 68 seats at stake. The hill state witnessed a record 75.28% turnout.

The Congress and the BJP had 36 and 26 seats respectively in the outgoing House.

Himachal Pradesh has a tradition of change in government after every elections and going by the trend, this time it appears to be the turn of the BJP which is upbeat after the exit polls predicted a victory for the saffron party.