Jakhar, who is the chief of Punjab Congress, defeated his nearest rival BJP nominee Swaran Salaria with a margin of 1,93,219 votes. 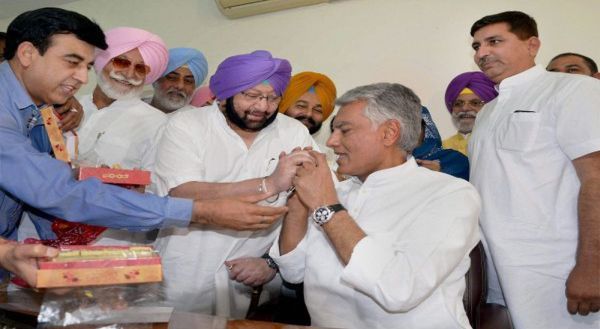 Having trounced the BJP's nominee in the Gurdaspur Lok Sabha bypolls, Congress leader Sunil Jakhar on Sunday said the saffron party must read the writing on the wall now.

Jakhar, who is the chief of Punjab Congress, defeated his nearest rival BJP nominee Swaran Salaria with a margin of 1,93,219 votes, a poll official said.

"The BJP must read the writing on the wall now," Jakhar said after his emphatic win.

"People have rejected the BJP and also shown mirror to (their ally) the Akalis," he said.

As such the Akalis were wiped out six months ago when they were relegated to the third place in the Punjab assembly elections, he said.

To a question, Jakhar said Sukhbir Badal and other Akali Dal leaders had all along been saying that Gurdaspur bypolls will be a referendum on the six-month-old Congress government.

"Now, Sukhbir will have to eat his own words.Where will Akalis go and hide their faces now, people have reaffirmed their faith in the leadership of Amarinder Singh and at the same time expressed anguish at the NDA government led by Narendra Modi," Jakhar said.

Jakhar also gave credit for his victory to the people and Congress workers who tirelessly worked over the past several weeks to enable him register a thumping win.

"This victory is also a victory of the Congress party, this win is a win of Amarinder Singh's leadership as people have reaffirmed their faith in him," he said.

To a query, Jakhar said people of Gurdaspur had rejected the 'outsider card' which the opposition parties in Punjab had tried to play against him as he did not belong to Gurdaspur.

"I am thankful to people who gave me their overwhelming love and support. I thank the people for placing their trust in me and my party under the leadership of Amarinder Singh and the would-be president Rahul Gandhi," he said.

Crediting the people of Gurdaspur for the victory, Congress workers, senior leadership and chief minister Amarinder Singh for his huge win, Jakhar said he was well aware of the responsibilities this victory carries.

"I am very well aware of the responsibilities this victory carries and I think I will be quite able to raise people's concerns in Parliament," Jakhar said.

It was an early Diwali at the Congress office as party workers distributed sweets in Patiala, Ludhiana, Jalandhar and Amritsar.

At Gurdaspur, Congress workers celebrated by distributing 'laddoos' as some workers could be seen dancing.