BJP Pulls Out Of Alliance With PDP In J&K: The Writing Was On The Wall

The decision to pull out of the government was announced after BJP president Amit Shah met party’s J&K ministers and top leaders in Delhi this morning. 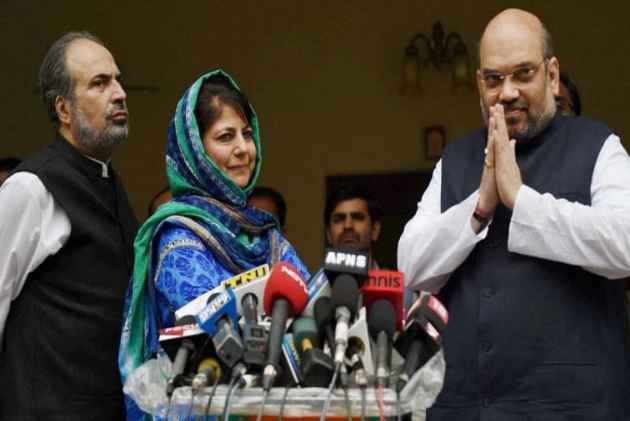 The BJP-PDP split was imminent as the intrinsic differences between the two parties started pulling the governance in Jammu and Kashmir in opposite directions. BJP general secretary Ram Madhav, one of the main architects of the alliance, said that it had become untenable for the BJP to continue the alliance.

With the Governor’s rule in place now, the state is likely to see an increase in operations by security forces. Government sources say that the cessation of operations during Ramzan has given time to terrorists and miscreants to dig in and it will take some time for the security forces to undo the damage.

The cracks in the alliance between the two ideologically antithetical parties had been visible time and again in the three years that it survived. It was just a matter of time before it reached a breaking point. Though leaders of both parties were unhappy with the alliance, BJP snatched the initiative as it pulled the plug on the Mehbooba Mufti government. Madhav cited issues of lack of development and maintenance of peace and order as the main issues on which the government had failed.

He said that while the Centre tried to end the woes of the people at its end, “I am pained to state that the government, of which were also a part, failed to control the Valley’s situation.”  Brutal killing of army jawan Aurangzeb and journalist Shujaat Bukhari, while the centre had announced cessation of operations during Ramzaan, was the tipping point.

The decision to pull out of the government was announced after BJP president Amit Shah met party’s J&K ministers and top leaders in Delhi this morning. Sources tell Outlook that Shah had met National Security Advisor (NSA) Ajit Doval earlier in the day to discuss the situation. Ram Madhav said that both, the prime minister and the party president weighed the situation before deciding that there was no other option.

“The decision to pull was taken some time ago. It was just a matter of time. The BJP could not have gone into 2019 Lok Sabha elections with an alliance with PDP, which is considered too soft on separatists. If not now, the split would have happened six months later but the situation presented the BJP the perfect opportunity to pull out of the alliance. At least, the BJP has done it on its terms,” revealed a senior BJP leader.

Sources say that the alliance had almost ended in 2016 too when the Valley had witnessed a prolonged period of violence and unrest after killing of Hizbul Mujahideen militant Burhan Wani in an encounter with security forces. PDP is believed to have objected to the killing and was in favour of taking him alive. “We let that pass as problem of coalition and tried to accommodate the chief minister but then it cannot go on forever,” the BJP leader explained.

The Narendra Modi government also showed the world that it did not lack in any effort to bring peace in Jammu and Kashmir. Home minister Rajnath Singh visited the Valley several times, ceasefire was announced during Ramzan, and former IB chief Dineshwar Sharma was sent as an interlocutor. “We did our bit. The central government also reached out to Pakistan but the situation has only worsened. We stopped operations for peace but did not receive peace in return,” Ram Madhav said.

“On the contrary, terrorism and violence has increased and radicalization is also on the rise. Keeping in mind the larger interest of India's integrity and keeping in mind that J&K is an integral part of India, and in order to bring peace, we pulled out from this coalition. Governor's rule should be imposed now,” he added.

The fact that the BJP entered into the alliance with PDP in the first place was seen as highly opportunistic by most political experts. However, leaders of both parties justified it as political pragmatism. They claimed that BJP’s hyper-nationalism and PDP’s soft-separatism will perhaps have a moderating effect on each other.

Three years down the line, it is clear that it has not happened. If anything, the two extremes have only pulled the state in opposite directions, leaving the people of the state trapped in the paradox.