The BJP's move raises the possibility of governor's rule in the volatile state, the eighth time since it was imposed in 1977. 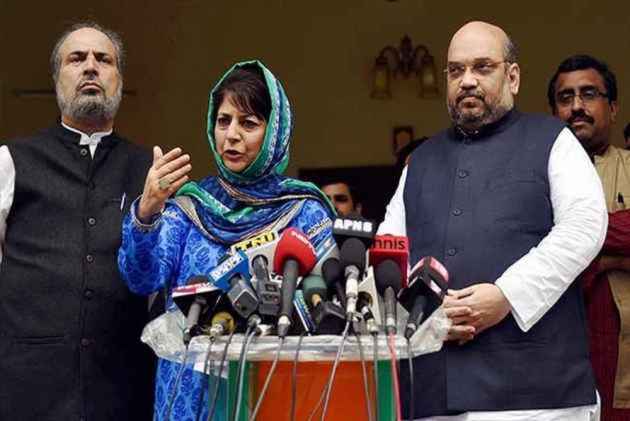 The BJP pulled out of its alliance with the PDP in Jammu and Kashmir led by Chief Minister Mehbooba Mufti, following an urgent meeting of the state party ministers and top leaders in the national capital called by Amit Shah on Tuesday.

The BJP's move raises the possibility of governor's rule in the volatile state, the eighth time since it was imposed in 1977. Madhav himself said the party favours governor's rule.

Chief Minister Mehbooba Mufti submitted her resignation to the Governor even as party spokesperson Rafi Ahmad Mir said they had no "indication" the BJP had decided to withdraw from the coalition.

ALSO READ: Omar Abdullah Rules Out Alliance With Any Party To Form Govt

"We tried our best to run the govt with BJP. This had to happen. This is a surprise for us because we did not have any indication about their decision," he said.

While talking to Outlook, Naeem Akhtar, the PDP spokesman, said the reasons for the break up of the  alliance have been enumerated by the BJP itself.  He said that his party was not going to break up the alliance as being rumoured which prompted the BJP to do it first.

The PDP leaders are aghast over the announcement as almost all the Ministers were in the secretariat. As they heard about the BJP's decision as they came out and rushed towards the official residence of the chief minister. Earlier during the day the party leaders were confident that the government will continue even though the BJP had called all the state leaders to Delhi. Many PDP Ministers saw the meeting of the BJP at Delhi as routine one having no inkling about the government's fall.

BJP leader and Deputy Chief Minister Kavinder Gupta told reporters in Delhi that he and his ministerial colleagues have submitted their resignations to the governor as well as to the chief minister.

ALSO READ: BJP dumps PDP: The Writing Was On The Wall

In the state elections in 2015, the BJP won 25 seats and the PDP 28 in the 87-member assembly. The two parties came together to form government with an Agenda of Alliance.

The Congress, which has 12 seats in the assembly, said there is no question of an alliance with the PDP. The other major party in the state is the National Conference with 15 seats.

General secretary of the party, Ram Madhav said the decision to end alliance was taken "keeping in mind the larger interest of India's security and integrity."

"Fact is that J&K is an integral part of India.  In order to bring control over the situation prevailing in the state we have decided that the reigns of power in the state be handed over to the Governor," he said.

We had to respect the mandate of the people. If we would not have formed govt at that time, Governor's rule or Presidential rule would have been imposed in the Valley. We had an alliance with them just for the mandate that was given by people: Ram Madhav, BJP pic.twitter.com/NRYIp6V0iW

Centre did everything for the Valley. We've tried to put a full-stop to the ceasefire violations by Pak. PDP has not been successful in fulfilling its promises. Our leaders have been facing a lot of difficulties from PDP in developmental works in Jammu & Ladakh: Ram Madhav, BJP pic.twitter.com/xeayIyA2FC

The BJP central leadership on Tuesday deliberated on the party's strategy in the state ahead of the 2019 Lok Sabha polls and also take stock of the political situation in Jammu and Kashmir, sources said.

"We have taken a decision, it is untenable for BJP to continue in alliance with PDP in Jammu & Kashmir, hence we are withdrawing," General secretary of the BJP, Ram Madhav said, adding "terrorism, violence and radicalisation have risen and fundamental rights of the citizens are under danger in the Valley. Shujaat Bukhari's killing is an example."

Bukhari, the editor-in-chief of the daily 'Rising Kashmir', was shot dead outside his office in Srinagar. Two police officers provided to him as personal bodyguards were also killed in the attack. The government has blamed militants based in Kashmir for the killings.

The decision to withdraw from the coalition comes days after the centre called off its month-long suspension of operations against terror groups during the holy month of Ramzan in Jammu and Kashmir and directed the security forces to take "all necessary action" at the earliest to prevent militants from launching attacks and indulging in violence.