The inside story why the Modi government took over seven tea gardens in West Bengal. And why there is little optimism about the future amongst workers… 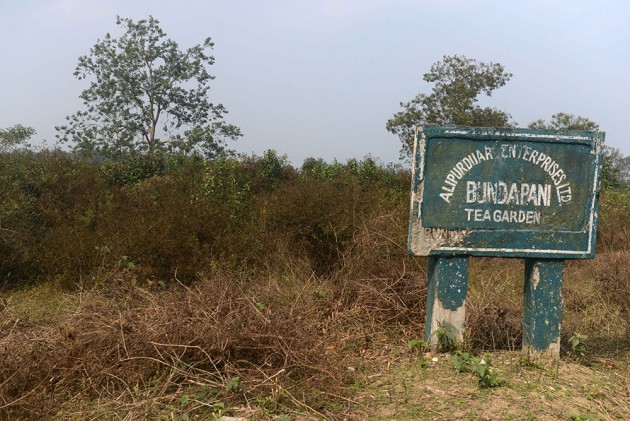 In the tea gardens at the foothills of the Himalayas in North Bengal, the three-month period from January to March is known as harvesting season. But this year, it has been nicknamed litigation season. On January 28 the Central government announced that it would take over seven tea gardens in the area, all owned by Duncan Industries Ltd. On February 1, the company moved Calcutta High Court appealing for a stay on the decision. On March 15, the court dismissed Duncan’s plea, ordering the company to pay dues which it owed to its workers and damages to the government.

But what transpired behind the scenes to culminate in this judgment transcends the limits of a season or two.

Indeed it goes back almost a decade. It was as early as August 29, 2007, when the then Union Labor Minister Oscar Fernandes received a letter from the Indian National Trade Union Congress (INTUC) leader G. Sanjeeva Reddy alerting him about alleged irregularities in Duncan’s payment of employee provident fund. “It is brought to our notice that the management of Duncan Industries Limited, without showing any reasons, deliberately started to deduct EPF (at a rate of) 10 percent instead of 12 in their 16 tea gardens,” it read.

Duncan allegedly also secretly enlisted its “agro industries” or tea estates as BIFR - eligible – or “sick”. There had been several other prominent tea estates in the Dooars region to have become defunct, such as Deklapara, Bundapani and Jaybirpara and not much was made of the matter.

It would perhaps never have come to the fore if reports of a man – a worker at one of Duncan’s tea estates – dying allegedly of malnutrition did not hit the headlines eight years later in November 2015. The incident opened up a Pandora’s Box, revealing shocking details of how tea workers were not paid wages for months.

Relating the death of the tea laborer with Duncan’s filing for bankruptcy, Planters’ union leader, Aloke Chakravorty, who was the first to urge the Central government to, as he put it, “take action against Duncan for negligence of workers’ rights,” told Outlook, “At the root of the abysmal condition of tea workers in North Bengal is the greed of tea companies.”

“By filing for BIFR,” he explains, “they get a number of benefits like bank loan waivers, tax exemptions and they don’t have to pay salaries, wages and PF to employees.” Like Chakravorty, several tea union leaders suggest that tea owners have little compassion for employees. 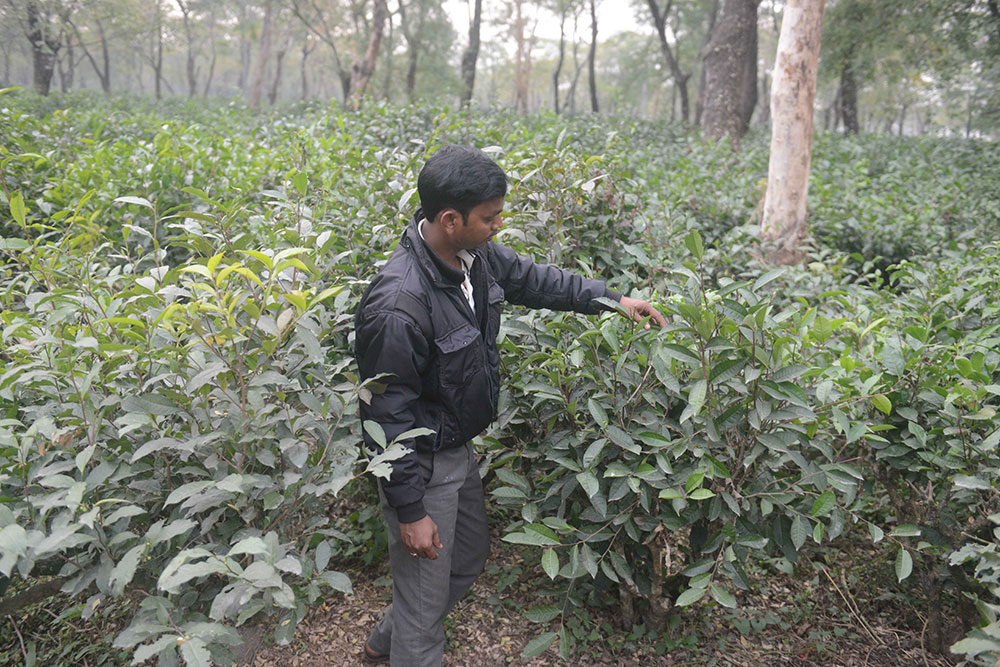 “We feel like children abandoned by parents and  left to fend for ourselves,” says Lawrence Kerketta, a 38-year-old laborer at the Bagrakote Tea Estate. “Since the beginning of last year the owners stopped paying wages without so much as an explanation. Usually when a company falls sick and the management cannot run it anymore, at least a ‘suspension of work’ notice is put up. But we didn’t even get that. We kept going to the fields with our various activities month after month and then finally stopped when we realized something was wrong.”

And every so often a household which is ready to bring out a framed, garlanded photograph of a member who has recently passed on due to, at least that’s what they claim, poverty and starvation. 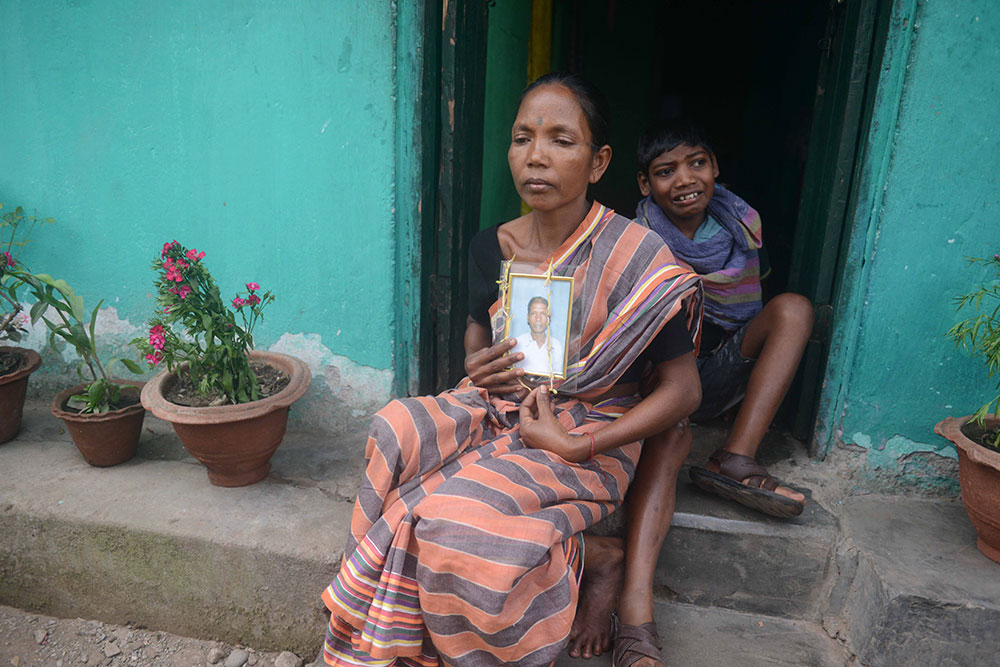 “My husband used to worry a lot because he wasn’t getting his wages for months. We have a large family with children and grandchildren and everyone was depended on work at the tea plantation. At nights he used to get chest pain. I used to try to soothe him and say, ‘don’t worry, everything will be ok,’ but….He had gone off to Kerala in search of work but who will give a job to an old man. He returned and finally died of stress,” says 49-year-old Rekha Oraon weeping as she narrated the circumstances that led to the death of her husband Kastu Oraon, 59, a tea plantation laborer. 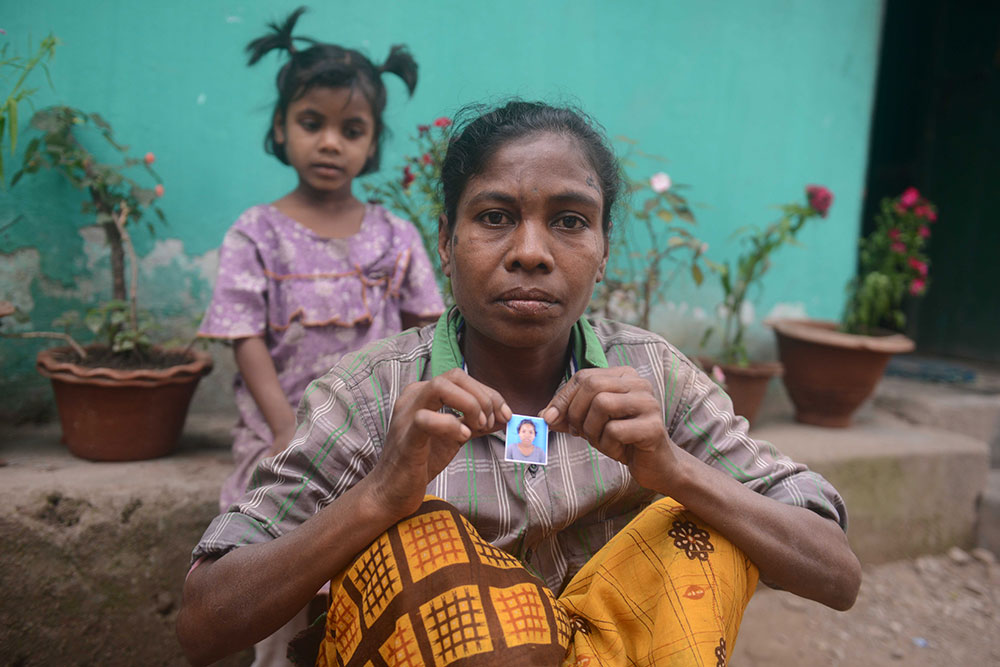 Thiry-eight-year-old Rita Mahali too brings out a photograph of her daughter. “She was lured away by a neighbor who told us, ‘We can get her good work. We have never seen her since. We think she was sold off. My younger daughter keeps asking where she is. How can I explain to her?” The lack of work, villagers claim, has seen an increase in women taking to prostitution to earn money and girls being trafficked across the border to nearby Bangladesh.

Evidently for political parties they see in all this misery an opportunity to make mileage. While the state government immediately announced that the tea garden workers would be eligible for the Rs 2 per kilo rice and 100 days of work schemes, Mamata Banerjee also gave an ultimatum to Duncan that if they don’t immediately start paying employees there would be a takeover. Sources told Outlook that Goenka promised Banerjee that wages would be paid starting January 31 and the factories reopened February 1. In the meantime, however, local BJP-supporters urged that the Centre intervene. 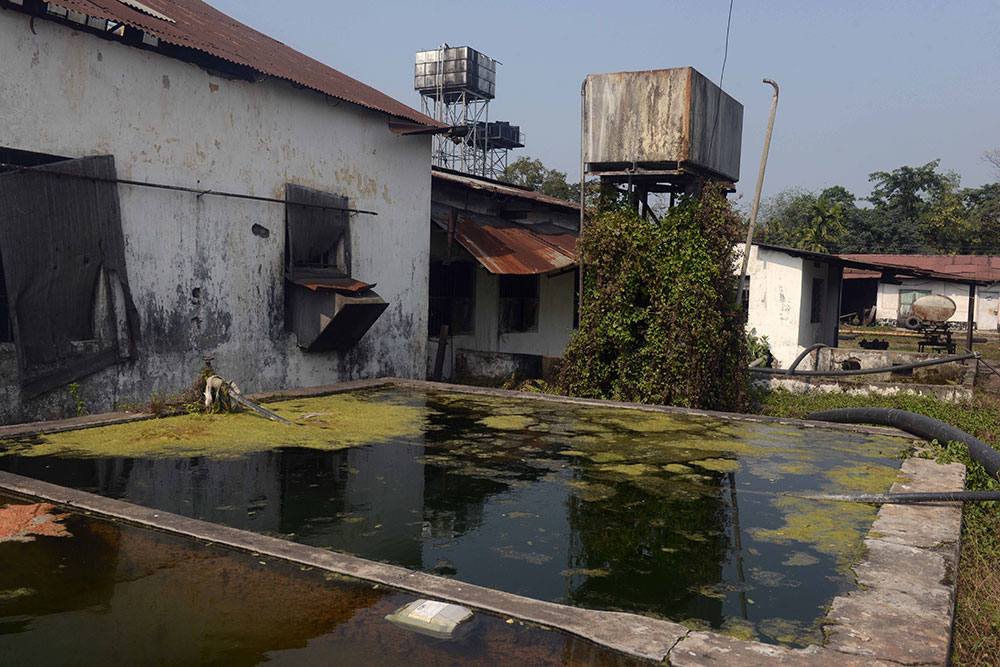 A local leader who wants to remain anonymous sent a letter to Union minister of state of commerce and industry Nirmala Sitaraman asking her to visit the area – which she did in January of this year –and rescue the tea gardens. It is interesting to note that all the seven tea gardens that the Centre decided to take over belong to the Alipurduar Birpara area, where Gorkha leader Bimal Gurung has considerable clout. Gurung’s Gorkha Jana Mukti Morcha are supporters of the BJP and the party’s only member of parliament had always been from the adjoining Darjeeling District (BJP’s Alhuwalia has succeeded BJP’s Jaswant Singh as the current MP from the constituency).

When Outlook Contacted Duncan Industries Vice President KK Mehra, he confirmed that the company’s writ petition had been accepted by the Calcutta High Court on February 1 but declined to comment on the judgement of March 15 – in which the company’s plea has been dismissed. The court has further ordered that Duncan pay the employees all pending dues and entreated both the center and the state governments to share responsibility.

At the gardens – both those in the ‘takeover’ list and those which aren’t – there is very little optimism. “We heard rumors that we will get our wages again and the factories will reopen. But where? We don’t believe it until we see something happen on the ground.” Are they happy about a government takeover? “As long as we can go back to work and get our money we don’t care who runs it.” Several of them observed that they rarely see the owners anyway.

Right now the families are surviving on the state government schemes like Rs 2 kilo rice. “But this is 1.60 rupees more than what we had to pay earlier,” says one worker. Industry insiders claim that companies like Duncan and others are in fact disinterested in running the tea gardens unless some such “archaic” rules like providing rice at 40 paise a kilo are scrapped. There are also allegations of political and trade union attacks on estate managers and owners want a more conducive atmosphere to conduct business.

Interestingly of the other tea gardens several which have shut shop in recent times, they have all been in the last five years, since the last regime came to power including Bundipani, Deklapara and Jaybirpara. Other tea estates in the region have reinvented themselves as it were like Makaibari’s Rajah Banerjee, who has introduced the concept of tea tourism in which international guests come and spend days at the estate and laborers are invited to open their houses to them for village “home stay” for a fee (Rs 900 for night).

January to March is the pruning season when plants are cropped for the next – “first flush” season. Just off the banks of the Leesh River that runs through north Bengal’s tea estates, you can see the well-groomed Dalgaon Tea Estate of the RNT Group. Across from it is Duncan’s Birpara Tea Estate, overgrown with shrubbery. Rajah Banerjee says, “One of them went with the flow, the other didn’t.”