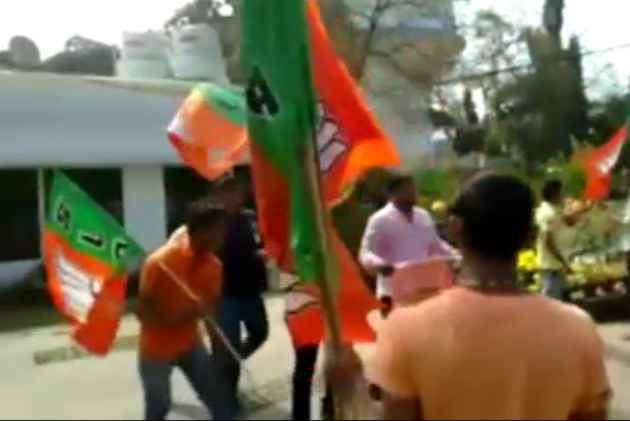 The group of miscreants stormed into the compound of the official quarters of V K Pandian, a senior IAS officer and the private secretary to the chief minister, and indulged in vandalism, police said.

At least four persons were arrested following the incident, Commissioner of Police Y B Khurania said.

They also hurled cow dung at the main gate accusing the official of working for the ruling BJD and interfering in political affairs, the police said.

A staff at the residence claimed that the attackers, who described themselves as BJP activists and carried party flags and placards, also assaulted him besides damaging the flower pots and some vehicles parked inside the compound.

While the IAS officer was not immediately available for comment, the commissioner of police said that the attack on the house of a public servant was a very serious matter and must be condemned.

Stating that the police had taken a serious view of the incident, Khurania said "lawlessness cannot be tolerated at any cost and stern action will be taken against those involved in the incident."

Condemning the incident, BJD spokesperson and MP Pratap Deb said the attack was "unfortunate and it exposed the real mindset of BJP leaders".

Stating that such violent acts and intolerance were unacceptable in a democracy, Deb said action would be taken as per law and those involved in the incident would be arrested.