Upset with BBC's cartoon on Modi, BJP's IT Cell In-charge asks if channel has outsourced job to Congress. 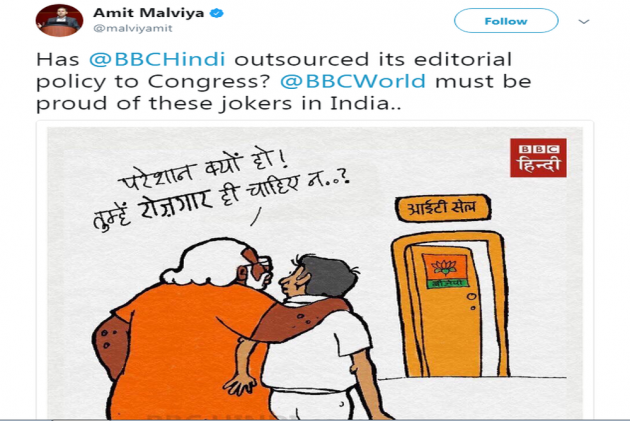 BJP's IT Cell in-charge Amit Malviya lashed out at news channel BBC Hindi for its cartoon that took a dig at the social media trolls that the Prime Minister follows on Twitter and rising unemployment in the country.

The cartoon shared by BBC Hindi shows the Prime Minister taking an unemployed youth to a door that reads 'BJP IT Cell' and asking 'Why are you worried? You need employment, right?'

The cartoon drew the ire of the BJP member who asked the channel if it has 'outsourced' its editorial policy to Congress and called the cartoonist a 'joker'.

'Has BBCHindi outsourced its editorial policy to Congress? BBCWorld must be proud of these jokers in India,' he tweeted.

Has @BBCHindi outsourced its editorial policy to Congress? @BBCWorld must be proud of these jokers in India.. pic.twitter.com/Uh37Mr3Ge8

The cartoon worked like a polysemy by conveying twin ideas of growing unemployment in the country and the army of BJP’s social media team that has been accused of choreographing pro-BJP sentiments through factory-line tweets and fake news.

According to a study published in the EPW journal, there has been an absolute decline in employment between 2013-14 and 2015-16, possibly for the first time since independence, adding that the decline in job creation has been worst in the past three years.

Indicators have worsened since mid-2014 which is also when the BJP led-NDA claimed a historic win in the Lok Sabha elections and Narendra Modi became the Prime Minister of the country.

The IT Cell of the Bhartiya Janta Party was instrumental in the party's mammoth victory in the 2014 Lok Sabha Elections and the 2017 Assembly Elections. The BJP has an army of people working to keep up a dominant social media presence of the party and the Prime Minister, the latter being the second most followed world leader on Twitter. However, concerns were raised after it was observed that many of the handles the PM follows are abusive trolls.