The picture was originally taken by photojournalist S.L. Shantha Kumar of The Times of India 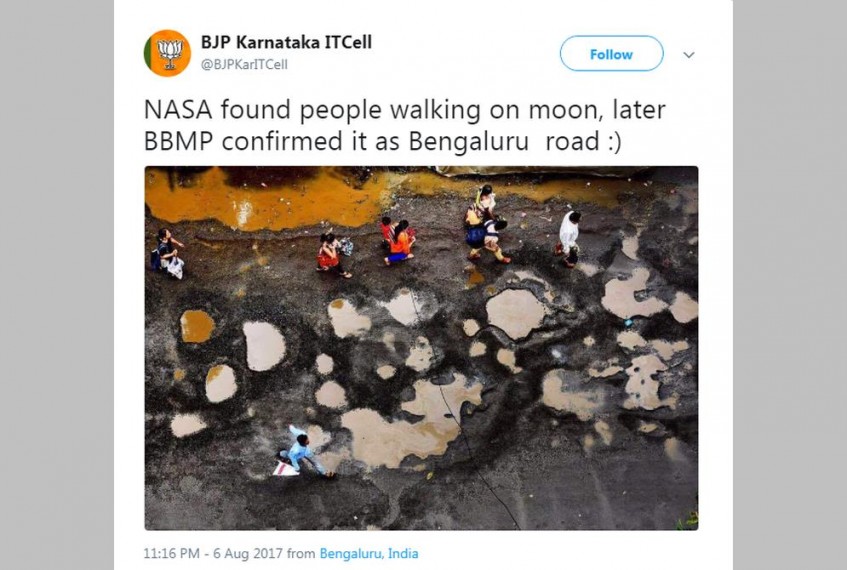 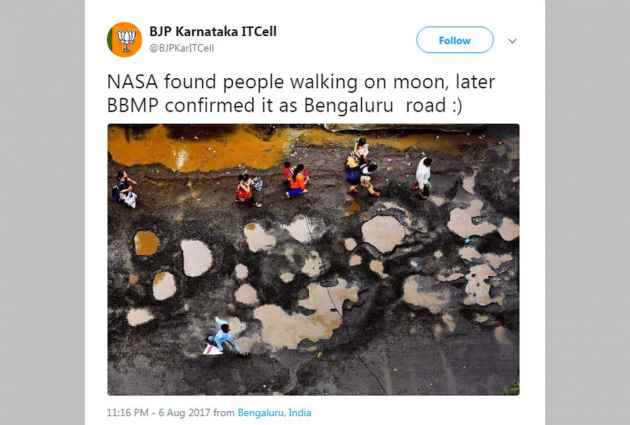 BJP’s Karnataka IT cell passed off a viral picture of a pot-holed road from Sion in Mumbai as a road in Bengaluru to embarrass the Congress-run Bruhat Bengaluru Mahanagara Palika.

The IT cell tweeted and shared the picture on its Facebook wall claiming: “NASA found people walking on moon, later BBMP confirmed it as Bengaluru road :)” Karnataka BJP chief and former chief minister B.S. Yeddyurappa and Union minister of statistics and programme implementation Sadananda Gowda follow the IT cell on Twitter.

Ironically, Brihan Mumbai Corporation is run by the party’s ally in Maharashtra, the Shiv Sena.

The picture was originally taken by photojournalist S.L. Shantha Kumar of The Times of India. Here is the screenshot of TOI that splashed the picture across four columns of it Mumbai edition. The IT Cell plagiarized another shot of the same road posted on Instagram by Kumar.

Meteor shower in Sion : A road at Prathiksha nagar speaks volumes of BMC apathy. Few spells of rains have washed away the so-called repair work by the civic body and the motorists are bearing the burnt . The pothole-ridden road makes for a dangerous accident-prone area #dailylife #potholes #dangerousroads #photojournalism #picoftheday #everdaylife #people #BMC#everdaymumbai #indiaphotography #everydaymumbai #everdaymumbai #

“This is a ridiculous thing to do. I had taken the picture and it is a copyright of The Times of India,” Kumar told Outlook.

“The picture was emblematic of the mess that Mumbai roads were during the rains. “They don’t know the pain I undertook in shooting the picture. The picture had gone ‘viral’ and forced BMC to take the roads seriously.”

Reacting on this, actor-turned politician, Ramya, who is heading Congress’s social media team at the national level, told Outlook that the BJP doesn’t care about whether they are putting out “credible stuff” or not.

“That’s how the BJP functions. They don’t care if they are putting out credible stuff. They just want attention,” she said, adding, “They (BJP) are the brand ambassadors of Photoshop.”

She also cited BJP leader Nupur Sharma’s post allegedly passing off a Gujarat riot picture as that of the violence in West Bengal.  "(BJP IT Cell chief) Amit Malviya sought to defend this act by saying that images can be used for representational purposes. That's ridiculous!" she said.

"We (at the Congress) don't seek attention. Our focus is the truth. Truth has its ways," Ramya added.

Last Thursday, the Bombay High Court  rapped the Municipal Corporation of Greater Mumbai (MCGM) for its failure to repair potholes and maintain roads in the megapolis which has resulted in the death of over 20 people since monsoon.

"We read that because of potholes more than 25 persons have died this monsoon. How many more do you (MCGM) want to eliminate (kill) before next monsoon? The condition of the roads here are bad. We are not at all satisfied," said Chief Justice Manjula Chellur.

A division bench of Chief Justice Chellur and Justice N M Jamdar was hearing a suo moto (on its own) public interest litigation on the poor condition of roads in Mumbai and the MCGM's failure to prevent and repair potholes every monsoon.

On July 4 this year, an 18-year-old boy was killed when he lost control over his motorcycle while trying to avoid a pothole at Bhiwandi Naka in the neighbouring Thane district. He fell from the vehicle and later died of head injuries.

Earlier, a 21-year-old man was killed when his two-wheeler landed in a pothole near the state-run JJ Hospital in Mumbai in September last year.

Popular radio jockey Malishka Mendonsa also incurred the wrath of the Shiv Sena which controls Mumbai's civic body for a satirical song on pothole ridden-Mumbai roads during the monsoon.

Lack Of Intellectual Rebellion In Students Is Worrying: Nine Things Learnt About The Young Indian