BJP's Politics Has Always Revolved Around Mahants, Sadhvis And Yogis

Adityanath's teacher, predecessor and political guru Mahant Avaidyanath, was a four-time Lok Sabha MP from Gorakhpur. He was the chief priest of Gorakhpur temple, gaining a significant role in the Ram Janambhoomi movement 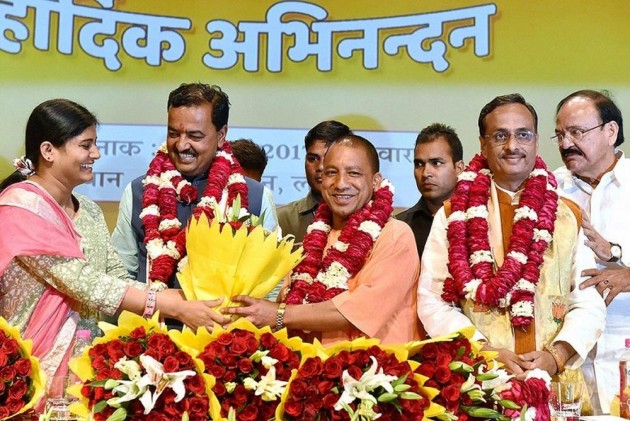 BJP’s politics has always revolved around mahants, yogis, sakshis and sadhvis. Gorakhpur MP Yogi Adityanath will take oath as the chief minister of Uttar Pradesh tomorrow. He will act as a big polarisation factor in the 2019 general elections in the Hindu heartland of India. His page yogiadityanath.in says ‘Hindu Punarjagran ke Mahanayak’.

His teacher, predecessor and political guru Mahant Avaidyanath, who passed away in 2014, was a four-time Lok Sabha MP from Gorakhpur. He was the chief priest of Gorakhpur temple, gaining a significant role in the Ram Janambhoomi movement by playing the Hindu card in mobilising voters from the community.

The current Union Water resources, river development and Ganga rejuvenation minister Uma Bharti too played an important role in the Ram Janambhoomi movement. Known as the ‘sanyasin’ politician, she tried to enter the sanctum sanctorum of Mahakaleshwar temple in her capacity as ‘sadhvi’ on Shivratri this February in Ujjain.

MP Sakshi Maharaj never leaves a chance to court controversy. Notwithstanding the fact that the Supreme Court had ruled that no political party or politician would be allowed to seek vote in the name of religion, he blamed Muslims for a population boom. He made the statement in Meerut this January, two days after Election Commission had announced elections to five states including UP.

He accused madrasas of teaching terrorism and ‘love jihad’, called Mahatama Gandhi’s assassin Nathuram Godse a patriot and asked Hindu women to produce four children. He began his political career with the BJP in 1990s, switching loyalties in the middle but eventually returning.

Addressing a BJP campaign in Delhi in December 2014, Minister of State Sadvi Niranjan Jyoti stoked controversy by asking voters to choose between ‘Ramzadon’ (those born of Ram ) and ‘haramzadon’ (illegimately born). This statement embarrassed the BJP hugely as opposition attacked the Modi government in Parliament.

Even as Prime Minister Narendra Modi disapproved of such unparliamentary language, Swami Chinmayanand who was MoS Home in Atal Behari Vajpayee government openly backed the sadhvi after her statement.