Instead of seeking to understand why Indians voted for the BJP in such great numbers, they are being presented as an irrational mob ‘misled and intimidated by a mammoth election campaign funded by big business’. 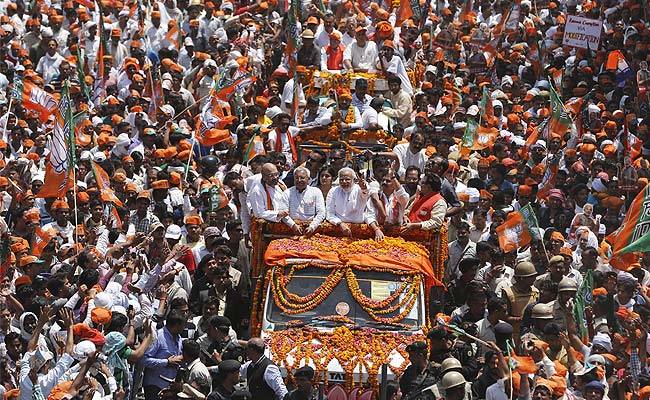 The European response to the BJP’s landslide victory has been troubling. All too often its analyses of the Indian elections are shockingly one-sided and disparaging towards the Indian voters. Fortunately, this reflects only one dimension of European culture.

From The Guardian to The Economist, Modi has been depicted as a Hindu fanatic who bodes ill for India. After the BJP’s victory, many comments took an ugly turn. One piece on the Guardian’s website carries the following title: ‘NarendraModi and the BJP bludgeoned their way to election victory’. A cartoon depicts a victorious Modi surfing on a landslide with a dark cloud looming over him that says ‘Gujarat riots’. In France, the leading newspaper Le Monde writes that one only has to observe the conduct of this ‘corpulent Hindu extremist’ in order to realize that ‘something very troubling is about to happen in India’.

We find few attempts by European commentators to understand why Indian citizens voted for the BJP in such great numbers. Instead, they characterize these Indians as an irrational mob that has let its dream of economic growth and a shining India override all ethical considerations. Basically, such analyses transform the BJP voters into cretins and cowards, ‘misled and intimidated by a mammoth election campaign funded by big business’.

Such accounts reflect ideological platitudes rather than genuine understanding. If the European intelligentsia is this blinded by ideology, it will not be able to prepare our youth for the world of the 21st century, where India is bound to be a major player. Worse, our politicians, diplomats and business people will succumb to ideological stories about Indian politics and society.

Indeed, this has happened many a time. Between 2002 and 2012, the diplomats of EU member states refused all contact with Modi. This policy was based on allegations of his complicity in the Gujarat riots of 2002 and claims that he is a ‘Hindu fascist’.

Sadly, the average educated European is informed exclusively by one section of Indian society: the intellectuals and journalists who call themselves ‘secular’ and ‘progressive’. Now, this group is a product of centuries of colonial education and western hegemony. They preach old colonial stories about the moral corruption of India. This explains why they are so popular among western academics and journalists: these ‘native informants’ happily reproduce what the West has always thought about India and confirm the unscientific commonplaces about ‘Hinduism’ and ‘the caste system’ that are still sold as knowledge in western universities.

Inspired by Indian secularists, western commentators depict the BJP as an evil force, which will throw India into the dark ages. Some even agree that it concerns a ‘fascist’ party, as though this term can be bandied about like a cheap epithet. In reality, the BJP is a democratic party similar to many right-of-centre parties in Europe: combining a liberal socio-economic policy with the aim of reviving traditional culture. But, as is the case with nationalist parties in Europe, this aim unfortunately takes the form of retrograde nationalist rhetoric.

This does not mean that the BJP’s election victory is a victory for Hindu nationalism. On the one hand, it is a vote for more economic growth and better governance, after a series of corruption scandals in the Congress party. On the other hand, it reflects the voice of a people emancipating itself from a colonial inferiority complex and wishing to rediscover its cultural strengths.

The vitriolic campaigning of the past six weeks indicated how divided the Indian people are. A wise European policy to an emerging world power should not choose sides in such internal conflicts. If the Indian citizenship elects Modi to power, then we Europeans should respect that choice. But we have failed to do just that. Some governments have indirectly supported rivals of the BJP and built a ‘cordon sanitaire’ around Modi.

From an Indian perspective, Europe’s double standard must be bewildering: India’s potential prime minister was treated as an untouchable for years, whereas Obama—who is responsible for upholding the abominations of Guantanamo, drone attacks, secret torture centres and spying programmes—is received as a hero. This policy is guided by an age-old story that dismisses India as an immoral and backward culture. If Europe continues to tell such stories, she will lose her way and her standing in the world of the 21st century.

Recently, a 19-year-old Indian visitor to the EU put it as follows: ‘This continent should just retire gracefully’. You can only imagine how painful it is for a European to hear how the future leaders of India see us. However, we do not despair, for there is hope for the old continent. After all, we are also the culture that generated the scientific revolution and still continues its commitment to the search for truth.

Dr Jakob De Roover is a researcher at the India Platform, Ghent University, Belgium. His research concerns the cultural differences between Europe and India, particularly in the domain of politics and questions of secularism and tolerance