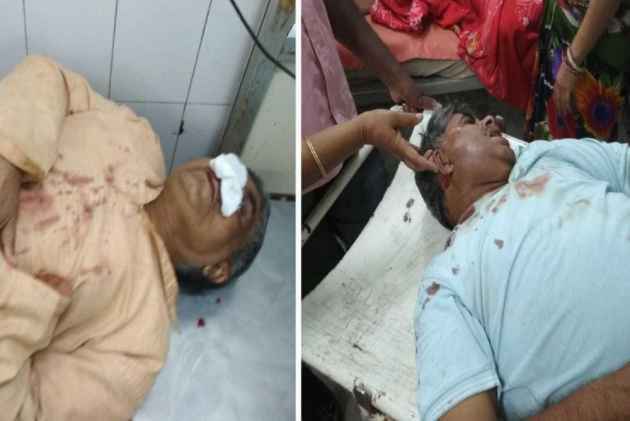 It is baffling how during election coverage in West Bengal, almost invariably, news channels report rigging, more often than not violent rigging, and then move right on, without so much as a “by your leave” to enumerate the projected figures that political parties have scored in the exit polls. It goes without saying that the arithmetic is tilted in favour of the party that did the rigging, which most commonly, but obviously, is the party that commands institutions such as the police and even, in the case of rural elections, election commissions. In other words the ruling party.

One can’t exactly expect a news anchor to get up from his or her seat and declare “well, since the polls didn’t actually take place democratically, we are cancelling the remaining part of the programme which deals with results.” The show must and has always gone on.

But that doesn’t stop thoughts from creeping up on how democratically-elected are the governments that are formed out of such rigged elections. And wondering how such governments are allowed to be formed in a country like India where four tall pillars of democracy are holding it in place.

In the jungles, wild beasts fight tooth and nail to acquire and protect their turf. In ancient times, kingdoms and fiefdoms followed this rule – might was right.

But is West Bengal a jungle and are we living in a ghetto controlled by musclemen?

If that is so, then perhaps the political parties do need to get themselves to a battlefield and fight it out like a war.

There is much talk about how West  Bengal elections have always been laced with violence.

The explanations on offer are many. The political history of the state itself is riddled with violence. The lawlessness that prevailed when the partition took place, with its rioting and randomness of countless, unaccounted for deaths. Political movements such as the Naxalbari revolution which justified killing for a cause.

The brutal crushing of such movements when youth engaged in “annihilation” were themselves annihilated by a Congress government, which masterminded the Emergency. The 34-year Left regime, composed of red parties, which did not differ too much from the ideals of taking power by force of their estranged comrades. The Maoist movement which took root in the fringes and blew up trains and convoys full of government representatives.

West Bengal has not always been a paragon of democracy. And the current regime that rules has passed through all these stages. Indeed, the common refrain from ruling Trinamoolites that the election violence and rigging that the Opposition is cribbing about is nothing new but germinated during the Left rule is something that the Left has not been able to give a fitting reply to. It is claimed in fact, that the thugs that the ruling party allegedly lets loose during elections were the very same “harmads” or goons who allegedly roughed up the Opposition during the Left regime.

Whatever may be the case, the Trinamool ought to remember that the former regime was uprooted and it was ushered in, in its place, precisely because the people of West Bengal had enough of the excesses committed against them. To repeat a past that was so overwhelmingly rejected would be to make a grave mistake.

The images of horror – of gangs of men, their faces covered in handkerchiefs, throwing people on the ground and thrashing them; of bombs exploding and voters running helter-skelter; of gun-toting goons entering polling booths and threatening the public with dire consequences –  do not belong in a democracy.  Scenes of dead men and women lying cold in a morgue are not expected from an election in a country like India. Children pouring over the parents’ bodies, their screams filling the air do not comport with the idea of Independent India.

It was reassuring when psephologist and political scientist professor Biswanath Chakraborty snapped when asked to predict the election results. “What panchayat polls? What predictions? Did the polls take place democratically?” His rhetorical question was tempered with a statement that can send a chill down the spine of anyone who believes in the four pillars of democracy. “I have made some predictions for a few news channels because the anchors had to keep their jobs. I could do that if that is the requirement.”

He spoke about a 23-year old boy who was shot dead during Monday’s election. “He was a bright student who held a master’s degree. But in the entire state of West Bengal no one could give him a job. Then a political party offered him work. On poll day he was sent to the booths to intimidate voters and opponents. There was mayhem. Police and public clashed. He got caught in a crossfire.”

There will be re-polling in 568 booths across Bengal on Wednesday. The results of the panchayat polls will be declared on May 17.