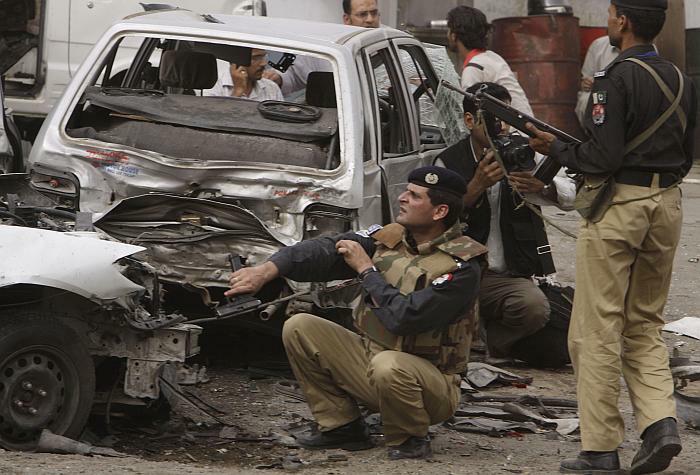 Terrorists (Punjabi Taliban) simultaneously attacked two Ahmedi sect mosques in Lahore during Friday prayers and killed over 80 people. First thoughts on this evil attack: The choice of target is easy to understand. Ahmedis are a persecuted and vilified minority in Pakistan and "mainstream" news organizations feel no compunction about attacking them, so the ground is already prepared. e.g. GEO TV's religion presenter (and phoney doctor) Amir Liaqat Hussain, a former minister, encouraged people to kill them if they "overstepped their bounds" and an Ahmedi doctor was promptly killed; there was some fuss in the liberal press but his programme aalim-Online is still on TV and writes a particularly vicious column in a major newspaper.

Of course, the day is also significant. May 28 is the anniversary of Pakistan's nuclear explosion and is a national day of jingoism, so the jihadis probably regarded it as appropriate for such an action.

There will be talk of stepped up security and other such usual BS, but the fact is that such terrorism is unstoppable until you get at the infrastructure that trains and guides these terrorists. This infrastructure of support and guidance is known to everyone in Pakistan, but decisive action is difficult because of the following reasons:

But all this does not mean that Pakistan will not survive. I still think it will survive. In fact, I will stick my neck out and predict that:

Flexible and accommodating versions of Islam that freely borrowed from local traditions and were more aligned with actual human needs in our part of the world were dominant in folk Islam in India. These flexible forms were mostly Sufi-derived and transmitted via everyday folk culture, not through "high church" texts. Now that literacy and concrete thinking are more prevalent and folk-culture is increasingly disconnected from people who have moved to new cities and live new lives, the folk versions are at a disadvantage and literal-minded modern people are susceptible to the jihadi-oriented orthodox version. Saudi money, CIA ingenuity and narrow-minded versions of Pakistani ideology did their magic and an entire generation grew up hostile to the flexible and humane folk Islam of our ancestors (usually dismissed as “Hindooana rusoom”).

The Islam regarded as orthodox and correct by these new literate Muslims is susceptible to jihadist interpretation. The elite encouraged this interpretation in the mistaken belief that it would help them gain the upper hand against India. Now that whole project has blown up in their face. Many of them realize that a change of course is needed, but they lack the vocabulary and the stories that would flesh out this new course. Outsiders, lacking local knowledge and empathy and frequently having other interests in view, probably do more harm than good when they try to identify “Sufi” and “moderate” versions to encourage. But in the long run, the needs of the elite will demand a new orthodoxy compatible with modern needs and the demand will be met. It's hard to see right now because these are still early days in this turnaround. But economic and social pressures are pushing in that direction and will prove unstoppable.

Until then, the show must go on.

And even when this monster is brought under control, the “normal” problems of South Asia will still remain to be solved.