Under Munjal's stewardship, his Hero Group grew from a regional company to a national and later the world's largest motorcycle maker. 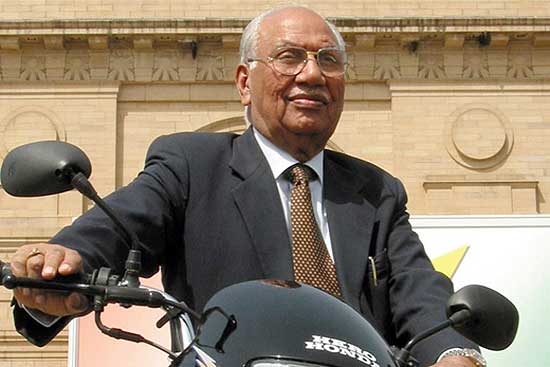 When I first met Brij Mohan Lall Munjal in the late 1980s at his Vasant Vihar office in Delhi, ?his business empire was at the pinnacle of its success. Hero's ?joint venture with Honda was running successfully and was ?en route to becoming the world's largest motorcycle maker, a feat he achieved within a few years. What struck me ?then ?was the confidence that ?Munjal ?had about his company and the ease with which he had ??the Indian motorcycle market within his ?grasp?.

Over the ?years, I met him several times. He aged?, of course,? but nothing else changed?.? H?is fighting spirit and enthusiasm to run ?his business remained intact.

Munjal's is a rags?-?to?-?riches story?. He came to Amritsar in India from Pakistan as a 20?-?year?-?old young man and started making b?i?cycle components and later ?complete bicycles. His efforts paid off and Hero Cycles became one of the world's largest maker of bicycles.

Under Munjal's stewardship, his Hero Group grew from a regional company to a national and later the world's largest motorcycle maker. When India spoke the language of scooters and Bajaj ruled the roost, Munjal dared to go into motorcycles which were then limited to Royal Enfield, Java and Yezdi and the home grown Rajdoot all of which had limited runs in the country. No one gave a serious thought to motorcycles or thought that they would be the common man's mainstay. But Munjal dared and won. A father figure in the Indian industry, he showed the industry how to set up and successfully run a winning company.

In 1984, he entered into a joint venture with Honda Motors, a relationship that remained intact for three decades. His leadership, even after he had moved away from day?-?to?-?day running of the company, was such that when Honda finally separated from Hero in 2011, the split was ?s?o amicable that it became a case study in management schools. Post split, he had built such a strong company that it still remain?s a world leader in motorcycles.

Munjal's hallmark was the way he settled things. This was evident from the way he ?sorted out ?inheritance issues and how the Her?o? Group fortunes were divided among his sons. Unlike many other groups which have gone through a lot of heartburn during such times, Hero's was a seamless and amicable division among his sons — ?something that he oversaw and executed.

People who knew Munjal say the secret of his success was in the personal touch he would give to business. People say that he would remember the names of every dealer, and Hero Honda had thousands of dealers, he knew most employees in the company and made it a point to attend functions of employees like marriages, to motivate his people. This won him not just respect but also loyalty that has paid rich dividends for the company and taken it to dizzy heights. Even after he retired from active work earlier this year, his? ethos? is visible in the $4 billion Hero Group.

Highly accomplished in the field of business, Munjal had been president of CII and SIAM and was on the board of the Reserve Bank of India. He was also one of India's richest and in October, he featured in the 27th position in Forbes Asia's list of richest Indians with a family fortune of $3 billion. All this from a person who never went to college. With his demise, one of the doyens who built Indian industry in the licence Raj era and saw a seamless transition into a liberalized India and ?recently ?into today's modern e-commerce, has gone. He will be deeply missed.