Family road trips in the past were planned and executed like military campaigns. 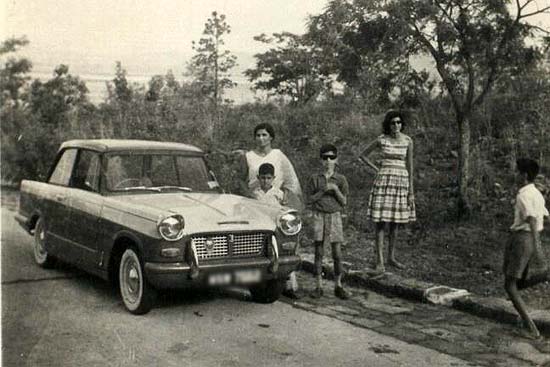 There is a photo from my largely unphotographed childhood (third child, what can I say?) that I love. In it, all you can see is our Cobalt blue ambassador car (Mark II) RSR 1700, laden with luggage on the carrier, secured with lashings of rope and covered over with a tarpaulin sheet, standing on the side of the road. It's obviously the middle of nowhere, there isn't another truck or car or dhaba to be seen anywhere on the long stretch of road that ends on the horizon. An open ice box is clearly visible on the side with some beer bottles bobbing up for air. In one tiny corner, almost obscured from view, is a tiny bum, crouched down on the grassy verge of the road. We've argued for decades about who the owner of that obviously peeing bum is, but no one has come forward to claim it. And in the foreground, almost swallowed up under the generous underbelly of RSR 1700, all that is visible are two pairs of legs, obviously working on something that needed urgent looking at. The legs belong to my father and uncle.

I love this photo, even though I am nowhere in it (and no, I will never accept that the bum is mine) because it so beautifully captures the essence of all the road trips we ever took as kids.

An abundance of :??people in the car, breakdowns on the road, unscheduled stops, food, drink, alfresco peeing.

A famine of:? ?other cars and vehicles.

Today when all you need to take along on a road trip is a cheerful disregard for safety, it seems odd to realise that the road trips of our childhood?? were planned and executed like military campaigns. Hannibal, when he crossed the Alps, probably spent less time worrying about the roadworthiness of his elephants than the average car owner did about his car when planning a road trip. The arrangements would begin a week in advance, with the car (either a Fiat or an Ambassador or a Fiat or an Ambassador) being given for servicing, overhauling, tyre checks etc. The day before the road trip, there would be a comprehensive, personalised check by the owner that would put modern day pre flight checks to shame. Then would begin the loading of the car, an enterprise that required the sort of engineering knowhow that a few millennia back facilitated the building of the pyramids. This involved piling the car with the two tons of food, the jerrycan of petrol and the weird assortment of luggage most of middle India owned, (two suitcases affectionately called attachees, two airbags and a bedroll aka bistrabund being a typical load) such that it could be covered over by a tarpaulin against unseasonal rains and could be lashed down with miles and miles of rope.

The feverish priming and checking of the car was clearly the triumph of hope over experience, since no matter how thorough the preparation and how short the trip, everyone's cars ritually broke down in the most obscure places necessitating stops like the one captured in the photo I love. The breakdowns could be classified in Ayurvedic terms as belonging to the vata, pitta or kapha dosha. Vata of course would be the tyre punctures, which then necessitated getting out the stepney and standing under trees as the tyre and tube got repaired. Pitta or the fire element would be overheating of the car, which could be resolved by the hi tech method of flinging water indiscriminately at the engine and watching it sizzle and burn, all the while waiting under trees. And kapha would be practically everything else that could go wrong and which invariably did, which meant a visit to the nearest garage and yes, also standing and waiting under trees.

When automotive engineering let down the side, the mothers would bring on the auxiliary forces of khana peena. Puris, alu, parathas, achaar, sandwiches, ice cold nimbu pani in an Eagle thermos, bottled cold drinks as a rare treat, some beer for the thirsty driver, and a baby elephant sized wodge of pound cake were almost always on the menu. All this was of course rations that the marauding army carried with it, rations devoured at eateries along the way were totally a bonus.

In the days before every mile of the highway was plastered with wall to wall carpeting of cola company billboards and when the words dhaba and vaishnav hadn't yet been legally wed, never to be torn asunder; in those dark ages our family made decisions about which place to stop at, based not on tripadvisor ratings but on the very visible charpoy ratings awarded by the truck drivers. The best ??dhabas had the longest line of charpoys snaking outside, because truck drivers always knew who had the best food and always stopped to catch 40 winks after their meal. Today's plastic tables and chairs may be easier to hose down and clean, but are no surrogate for Michelin stars.

Of course no one had car ACs, the truly posh people had tiny wall mounted fans on their official Ambassadors — and peasants like us had wet towels strung up near windows to block the glare of the sun. My father, in a burst of inspiration, once decided to make the car a travelling desert cooler by stringing up khus curtains that hung over the windows and were lashed to the carrier. They had to have water chucked periodically at them and flapped enthusiastically  if not particularly efficaciously, like Labrador tails against our upturned faces. (It wasn't a long lived experiment — they were hastily yanked off after the unfortunate incident of my carsick cousin and the ricocheting upchuck.)

Road trips also meant that my mother in the front seat had to snake out her hand to periodically defog the windscreen in inclement weather, all of us had to be ready to leap out and push start the car at a moments notice and all music was user generated. Today we have incredibly comfortable cars that boast every modcon available at the press of a button; so it was obviously rare prescience that made all of us ask repeatedly, are we there yet? With cars that are now fitted with the top four things that you really really need on a road trip — DVD players, a separate holder for both sunglasses and wet umbrellas and bum warmers to keep your tushy toasty — I want to tell my younger self, we've finally arrived.