Bollywood Veterans Get New Lease Of Life With OTT Comeback 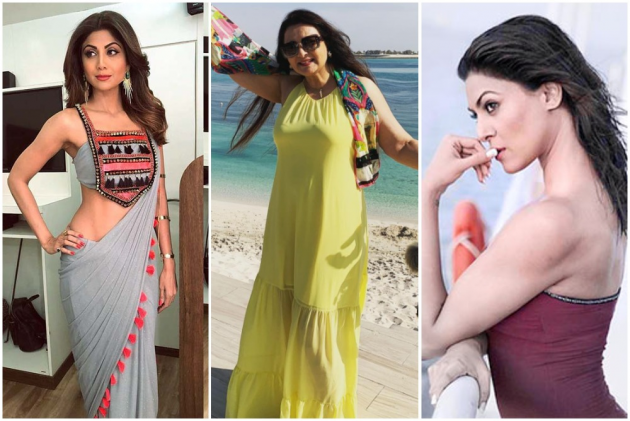 American actor Sarah Jessica Parker just called out the ageism that she’s experienced when HBO Max announced the Sex and the City revival, And Just Like That… In a new interview with Vogue, both Parker and SATC producer-writer Michael Patrick King opened up about the trolling they've witnessed online over the past few months.

There’s so much misogynist chatter in response to us that would never. Happen. About. A. Man.,” Parker tells Vogue. “Gray hair, gray hair, gray hair. Does she have gray hair?” In July, Parker displayed her natural gray roots while out for lunch with friends. She addressed the frenzy that followed, saying, “I’m sitting with Andy Cohen, and he has a full head of gray hair, and he’ s exquisite. Why is it OK for him? I don’t know what to tell you people!”

But what about Bollywood? Is the scene any better?

“Age is just a number,” says actor Shilpa Shetty who made her comeback with Hungama2. Many actors are seen taking the digital route for a comeback. The ‘dhak dhak’ actress who stole the heart of all will soon be seen in the upcoming drama web series ‘Finding Anamika’ in which she plays a global superstar. There are plenty of strong and versatile characters being written for older actors for the streaming platform. In fact, many central roles for both men and women in their forties, fifties and above are being essayed on the digital platform.

As veteran actors make a comeback through online through social media or OTT, the real question is, does ageism still plague Bollywood?

Speaking about ageing, actor Poonam Dillon who recently chose a web-series for her comeback, explains that it depends on what you are looking for in acting. She explains, “If you are still looking at doing romantic roles and wearing pretty clothes, like what I did thirty-five years ago, then I would be obviously disappointed. But yes, if you compare this scenario with Hollywood when it comes to getting meaty roles for women who are forty or fifty plus, then options are definitely lesser. With OTT, though, things are definitely opening up. Now we have roles and characters which are specially made for women and men in their forties, fifties, sixties and eighties. I can see the change happening.”

Dhillon isn't the only one to have made a digital comeback in recent times. Former beauty queen and actor, Sushmita Sen too made a comeback with the web series ‘Aarya’ on the digital platform after a sabbatical from Bollywood. Model turned actress Lara Dutta took a break for some years after becoming a mother. She made a comeback with the Disney+Hotstar show, ‘Hundred’ where she was seen playing the role of a cop. Not just actresses, Milind Soman who stayed away from acting too made a comeback with Amazon’s ‘Four More Shots Please’ and will be seen again in ‘Paurashpur’.

What actors are now looking at are impactful roles for their age groups and OTT is offering them with an open hand. In a recent interview with Outlook on her comeback with ‘Hungama 2’, Shilpa Shetty remarked that it was amazing to see how the whole scenario had changed. She says, “I am happy that more people will get to see it. I am not nervous because now box office doesn’t matter. Digital medium has great content for all age groups.”

Dwelling further on how production and to some extent acting has changed over the years, Dhillon said, “Today what is required is absolute natural acting, not overdramatic at all. Dialogues are not delivered as ‘dialogues’ but rather as spoken words. The method of shooting is also different because now there are no cuts and the entire scene is shot in one take. That was something new that I had to learn the whole scene and be spot on. During our times we used to shoot in bits with breaks, so we never had to learn the entire scene at one time. In today’s time, you need to know your lines from the beginning to the end. Today it is much more realistic. In our times even if we had to show a slum, we were trying to glamorize it. Now there are a lot more interesting roles. There are a variety of characters that you get to play because as a heroine you are normally a prototype. I am happy that I don’t have to dance around trees.”

Padmini Kholapuri too made a comeback this year with a web series. She feels that the OTT platform is given a lot of options to actors of all age groups including the ones who want to make a comeback. She says, “Web series is a smaller medium. But nothing changes. An actor is an actor whether on television or web series or cinema. It is the same and there is no change in your performance. Since, the number of episodes is more, you get more chance to work on the nuances of the character. Even during my younger days, I was a director’s actor and with my comeback too, I submitted myself to the way my director wanted me to act.”

Talking about how the preparation is different as compared to yester years Kholapuri says, “During our times preparations started literally on shoot. We used to reach the sets and see the writer writing and scribbling and making changes in the scenes. Now everything is pretty much organised and everything comes well in advance and you have enough preparation time including the time to learn your lines. Nowadays we get time to do the reading with the directors and understand the characters. During our time it was like okay ‘X’ is your co-actor and you just meet them on sets, whereas now it is more planned, strategized and more importance is given to detailing. Now you have to be completely prepared when it came to memorizing the line.”

Soni Razdhan had once mentioned that getting new roles after a certain age is a struggle. But one needs to try out new platforms and newer roles whether it is OTT, short films or feature films. She says, “The approach of acting doesn’t change with format and age. The only thing that changes is roles.”

The point is actors as they are growing older are given a chance to evolve and try something new and different with the help of the digital platform. Raveena Tandon too made a comeback with ‘Aranyak’ on Netflix. In a recent interview with Outlook the 47-yearold actor said on her comeback, “There was a point when as an actor you have been doing the same kind of films and similar kinds of roles and suddenly you start thinking when will I really grow up? When will I evolve as an actor? Is this what I am limited to? When can I start pushing my boundaries?” she says. “Those questions were constantly on my mind when I made a conscious effort to try out and do different roles and the audiences accepted me.”

Also Read | Raveena Tandon: Today's ‘Great' Actresses Are Wary Of Coming Out Of Their Comfort Zones

“Making a comeback is a huge thing for me,” echoes veteran actor Raj Babbar. He states that what is important for him is a role and a subject. “Getting to work in a web series is a new experience for me. For an actor medium is not important. All we want to do is perform because we are all performers at the end of the day. When director Habib Faisal narrated the subject and the role of ‘Di Bekarar’ I was simply excited to do it.”

OTT is giving an outlet for more challenging roles to all actors where age, shape, size, colour doesn’t matter. Babbar explains that for an actor the method of acting doesn’t change with web series nor does the emotions. He adds, “I started my career with radio plays. So, in a radio play, my listeners are not able to see me, but as an actor one needs to know how to emote. Web series gives you a lot of chance to go into the nuances of the characters.”