Book Review | Women Who Wear Only Themselves: Conversations With Four Travellers On Sacred Journeys

Subramaniam chose four who were unsung heroines, with little cult following. They cast off their lives and were very clear about the divide between the material and the spiritual. 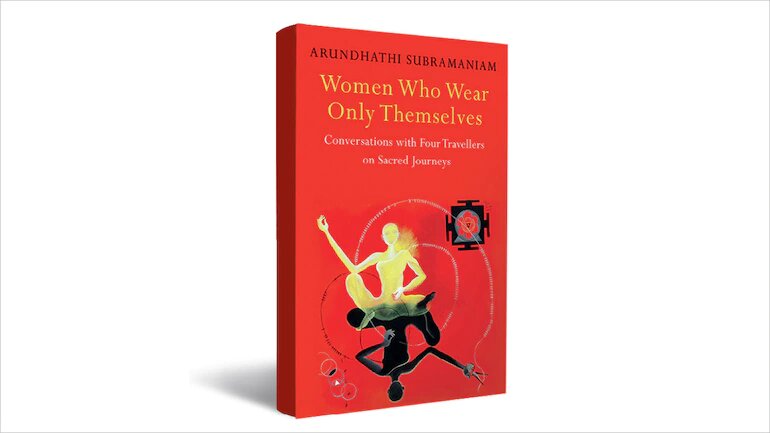 Women Who Wear Only Themselves: Conversations With Four Travellers On Sacred Journeys

Arundhathi Subramaniam’s book is a voyage through four essays on spirituality, about women who hail from south India, who journey through the many worlds of the spirit in their own unique ways. The book is an attempt to satisfy Subramaniam’s thirst for conversations, to refresh her understanding of contemporary women, especially those who have the ability to improvise. It is also a study of independence, women casting off their families to find their gurus and their true selves. The world of the spirit she writes about is a world of seekers and gurus, and she is very clear hers is the role of a seeker.

In the landscape of Indian spirituality there are many women, Akka Mahadevi, Meerabai and many other current lambent presences. However, Subramaniam chose four who were unsung heroines, with little cult following. They cast off their lives and were very clear about the divide between the material and the spiritual. Subramaniam’s language matches her sadhvis—Annapurani Amma’s in your face nakedness that flaunts a different kind of no-pretences reality, Balarishi’s quietness in the face of her vibrating chants that cover ground between gravity and star song, her cousin Lata Mani, whose road to Damascus moment struck in the cartwheel of a car accident.

This in one sense is a narrative of going beyond the hype that normally accompanies spiritual figures, men or women. For the most part, the words create a barrier between godmen and their disciples, fuelled by rituals of separation and stories of miracles or outbreaks of sudden sinfulness, which rapidly shed the saffron in the world’s eyes. As a result, many have a sense of scepticism when it comes to ‘gurus’ whether male or female—reflected in a mention of Shirdi Sai Baba in one of Subramaniam’s interviews and whether he was really a spiritual presence or a fake. Annapurani Amma who was asked the question vindicated his spirituality after he appeared to her in the bustle of a bazaar.

The author’s hope was that those she had chosen would continue to remain relatively unknown and therefore nurture their spiritual truth without interference. They are silent bystanders, shufflers on the sidelines—in fact, Maa Kapoori is a monk in someone else’s ashram.

It is a story of relationships and love though not in the accepted sense of the term since the love of the divine is not the same as that of popular romance. The four women find their own way to becoming gurus, some starting as seekers while others like Balarishi begin as gurus. In all roles, Subramaniam writes there is questioning and self doubt. One has to find one’s own way through the wood before standing tall. Spiritual impact comes in different ways, like a thunderbolt in some cases or welling quietly out of the depths of the unconscious. Subramaniam describes them as bhakts though she admits that the word has now come to be associated with the Right in India.

Subramaniam discovers that physical practises do sometimes help the spiritual side to evolve like diets of ash gourd juice, early morning dips in temple tanks and even a three year vow of silence in the case of Maa Kapoori.

Along the way, the author discusses icons of religion, the Carnatic mystic Sadashiva Brahmendra noted for the rapt music of his hymns and his trances, Kakabajudran who flew through centuries on the wings of a crow—male icons for the most part, since gurus tend to be male and Shiva the most loved for his compassion. For the confident woman, Shiva, the advaits say, is the best guide, while Shakti is for ones who are not so confident. Subramaniam enriches her text with her own poems along with snatches from Meerabai, Basavanna and Rumi.

The journey of a woman mystic she says is rather like the lotus blooming in a marsh. All her sadhakas look fondly back on their journey—there are memories of long black silky hair in the days before faith brought a shaven head. Annaporaani Amma remembers borrowing her sister’s sari and getting into trouble in the days when she actually wore clothes. Balarishi took to wearing jeans again and was once known as the Kitkat Swamy. For the author it is an exploration of the fabric of faith laid out in a canvas of different language tropes—clothes or the lack of them are part and parcel of the story. Fabrics unravel from saris to nakedness—progressing from saffron to denim to the embracing of monkhood and its requisite trappings. In the end, fabric doesn’t matter—the truth of the soul does and from this comes the title of the book—these women are clad only in what they stand for.