In his new book Badri Narayan says, ‘Much of the BJP’s popularity today has to do with the socio-cultural mindset that the Sangh has formed in the last fifty to sixty years through its groundwork’. 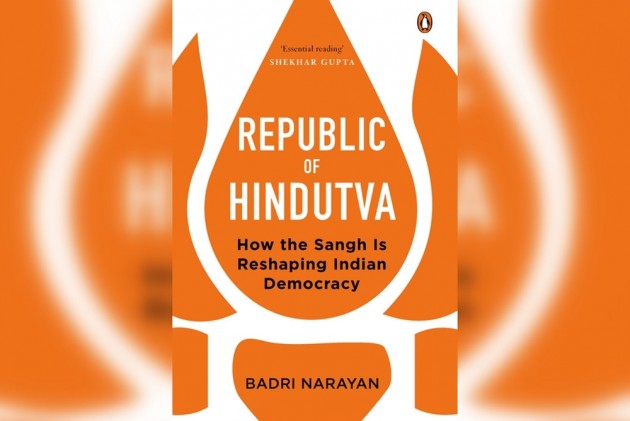 This new RSS is reinterpreting Indian history and culture, giving new meaning to traditional discourses that suits its contemporary ideological requirements. I find that much of the BJP’s popularity today has to do with the socio-cultural mindset that the sangh has formed in the last fifty to sixty years through its groundwork. The sangh has slowly, without worrying about media attention, formed a large group of dedicated and able workers, who are active from the top to the lowest levels, be it for elections or opinion-making, group mobilization or sociocultural activities. Through its training camps (varga), the sangh is, it claims, preparing over a lakh cadre every year.7

During my research I observed that the greatest strength of the sangh is its language of mobilization. Understanding this strength, a Congress leader says, ‘In the language of the sangh, one hears the echo of 5000 years. It has internalized many of Indian traditions. If the Congress has to strengthen [its position vis-à-vis the BJP], it must develop a counter language loaded with the image of past, present and future of Indian society.’ The sangh uses language that reflects the sixteen stages of life as in Hinduism (samskaras), which defines a person’s life from birth to death. If you closely analyse the bauddhiki (speech delivered by the RSS pracharaks) at the vargas, you can discern the source of this language, the strategy of its construction and its form.

There is an impressive storytelling element in the speeches of the volunteers, which is the regular culture of their shakhas and vargas. Through these stories the struggle, motivation and aim of the sangh are narrated. An important element in all the speeches of the sangh is the element of valour. Poems composed by Ramdhari singh Dinkar and other nationalist poets, who have used this element, are recited.8 The storytelling style of the volunteers reminds us of the Indian storytelling tradition in which the ancient mythological texts like the Bhagvad Purana, the Mahabharata, Satyanarayan Vrat Katha, etc., are narrated and heard widely. In the same narrative technique, workers of the sangh develop their lectures with new content. We know that tales and stories are deeply rooted in the Indian psyche. For instance, people in villages often use tales and idioms to communicate their message. Our society’s childlike imagination weaves its dreams by hearing tales along with religious and moral narratives. Perhaps understanding this mindset, the poems that are used in the discourse of the sangh have tales, both modern and old. Images and characters emerge and are used to motivate people. The audience becomes enthralled by these speeches; it is because of the hypnotic effect of these tales that M.s. Golwalkar, the second sarsanghchalak of the Rss, imagined the following structure of an Indian village, inspired by the suggestion of Madan Mohan Malaviya: ‘sabhas [assemblies] in every village, tales in every sabha, schools in every village, along with mallashala [wrestling grounds]’. In one of Malaviya’s slokas composed in sanskrit he had opined:

Another strategy of these discourses is the attempt to assimilate, in which the sangh is trying to co-opt different and opposing ideologies in it. Through these efforts, the criticism of Hindu religion by Ambedkar and neo-Buddhists disappears and an interactive relation between Hinduism and Buddhism emerges. Alongside, in the recent past, Dalit groups have identified with many minor characters in Hindu texts and presented them as symbols of injustice done to them. Efforts are being made to highlight such minor characters within the discourses of the sangh, in which they and their identities could be given respect. For instance, they project the character of Eklavya from the Mahabharata as a dharmaparayan Dalit (a Dalit who follows his dharma), who sacrificed his thumb in reverence to his guru. In the process, they underplay the aspect of injustice by Dronacharya, which Ambedkarite Dalits highlight. Using the Eklavya myth in this way, they claim the Dalit community has traditionally produced Dharmaparayan Dalit Mahapurush (great dharma-following Dalit men) and that as a community Dalits are totally committed to Hindu cultural values.

Under this strategy some initiatives have also been undertaken to evolve a larger narrative with different kinds of meanings and relations developed from characters, tales and religions that previously stood against or in opposition to them. Take, for instance, the construction of the shabari temple; a different depiction of the relationship between Ram, Hanuman and the forest dwellers; and initiating temple construction along with school and cleaning projects in tribal villages. In northern India, the sangh is not unaware of local and little traditions popular among marginal communities. It is constantly trying to explore and assimilate them in its metanarrative (see chapter 2 for more details). This process of assimilation at the level of language is not easy or straightforward, but is full of conflicts and intricacies. small or micro-narratives often tend to be dissenting in nature and sometimes deconstruct the metanarrative itself. The pracharak tries to tone down the dissonant aspect to make it easy to absorb. This process creates a rupture in the RSS’s traditional language, its texture and tone. For instance, when the RSS has to deal with the Dalit identity, it uses two words: ‘Dalit’ and ‘vanchit’ (unprivileged). These two words are not merely terms. A large section of the literate Dalit community identifies itself as Dalit, which connotes a politically empowered community. But when the RSS attempts to bring them under a broader ‘vanchit’ identity, it generates tension. This transformation of Dalit to vanchit creates processual conflicts. The RSS pracharaks try to synthesize this conflict. Only a few very efficient and senior pracharaks are able to do this successfully.

Here I wish to assert that the discourses of the sangh are not spontaneous. These narratives emerge under the influence of aims, objectives and contemporary needs of the sangh conceptualized by their top leadership. While there is appropriation of smaller and neglected subaltern traditions in the RSS discourse at many places, the greatest challenge of the workers is how to resolve the internal conflicts within the metanarratives. For this, the feedback of the RSS cadres working among various social groups at the grassroots level is very important. Sometimes they manage to resolve them, but sometimes they are not so successful. But their efforts to widen their narrative are constant. For example, the stories of forest dwellers along the North-eastern borders and those of Dalit groups are now slowly entering the narratives of the RSS. It remains to be seen how the sangh manages to assimilate opposing and conflicting narratives.