Supreme Court lawyer Ejaz Maqbool’s new book shows that humour and Urdu poetry have played a significant role in handling even the tensest situations and serious arguments in courts. 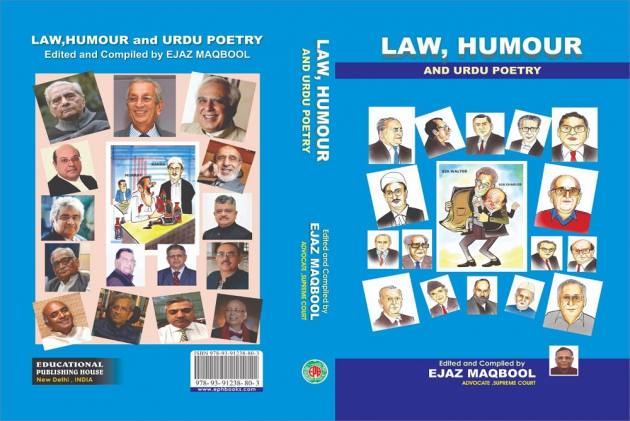 A well-known Supreme Court lawyer Ejaz Maqbool, who has appeared in numerous high-profile cases, has recently got published a book, ‘Law, Humour and Urdu Poetry’. It is a compilation of witty and humorous instances and exchange of words among lawyers and judges during arguments in courts or informal meetings in the court premises.

Maqbool’s book shows that humour and Urdu poetry have played a significant role in handling even the tensest situations and serious arguments in courts.

In an interview with Outlook, Maqbool has narrated several interesting instances that he had collected from various court proceedings for over five years. Excerpts

What prompted you to write a book on the use of Urdu poetry and humour in courts in India?

I always had a great liking for humour in my life. I used my wit and humour to get elected as the Vice-President of Aligarh Muslim University Students’ Union. I also used my wit and humour to get a house on rent when I started my profession as an advocate almost 36 years back. I told the landlord that I would not enter his house as I had the following disqualifications: - (i)      I was a Chada (a bachelor in Punjab language), (ii) I was a Bihari, (iii) I was an advocate and (iv) I was a Muslim. The landlord told me that he had never seen such an honest tenant and he immediately gave me his barsati floor in Greater Kailash Enclave-II on rent.

I had been collecting the anecdotes for almost five years and the idea to compile it into a book form came to me when I had enough collection to be compiled in a book form. I am very indebted to many senior advocates, former Judges and Solicitor Generals of India for giving their contribution in the book.

Do you remember any case in which an advocate got a relief from the judge using his wit and humour?

There are many such cases that I have mentioned in the book. One of the most interesting ones relates to a hearing of a case in which the then Delhi High Court judge Justice TS Thakur was reluctant to give an early date for hearing and listed the matter six months later. When he stood up and was about to leave, the arguing counsel for the accused, Najmi Waziri, who has been elevated to be a judge in Delhi High Court now, read out one line from the eminent Urdu poet Mirza Ghalib and said, “kaun jeeta hai tere zulf ke sar hone tak”. It means how would I know when will you love me?

Justice Thakur who had a great fondness for Urdu poetry returned to his seat and said, “Read the first couplet.” Then Waziri said, “Aah ko chahiye ek umr asar hote tak.” This means that you will take a lifetime to realise my pain. After hearing this couplet, Justice Thakur got impressed with Waziri's knowledge and interest in Mirza Ghalib and passed an order to list the matter within a week.

Can you share some of the interesting anecdotes that you have mentioned in the book?

My book has several very interesting anecdotes. In one such instance, a matter concerning rape was being heard by a Bench in the Supreme Court. One of the arguments addressed by the Counsel was that his client was 65 years old at the time of the incident and he was incapable of committing the horrendous crime of rape.

Mr Ram Jethmalani who was sitting in the courtroom had vast experience in criminal matters. Mr. Jethmalani at that time was 85 years old and he recently died at the age of 94 years. The presiding Judge enquired from Mr. Jethmalani about the arguments being addressed by the advocate for the accused. Mr. Jethmalani got up and said “I plead guilty, My Lord!!”

In another case of humorous nature, once Mr. Shanti Bhushan, Senior Advocate had to undergo by-pass surgery. After the surgery, while filing his income tax returns, he decided to treat the expenses incurred on the surgery as a deductible expense under the Income Tax Act, treating the said expense as the cost of repair of a plaint (a pleading or an argument) used for his profession. The deduction was not allowed by the Income Tax Authorities and he preferred an Appeal before the High Court of Delhi. The Learned Single Judge of the High Court rejected the Appeal preferred by him and quoted the couplet of Ghalib:

(Here, the heart is personified. It is asked of it what ails it? What is the remedy for the malady). The matter is currently pending before the Hon’ble Supreme Court.

Besides the exchange of witty words during court hearings, have you also witnessed and mentioned similar instances in court corridors in the book?

Yes, of course, on numerous occasions. I will share one that I have mentioned in the book. Once Mr. G. Ramaswamy known for his wit saw Mr. Soli Sorabjee in the Supreme Court corridors. He remarked in a sing-song voice, “Soli ke peeche kya hai”. Soli looked very uncomfortably and just mumbled something. G.R. again told him “Soli ke peeche kya hai”. Soli again giggled but did not know what to answer. To which G.R. replied, “Sorabjee”.

Do you remember any such witty or embarrassing instances which the senior lawyer himself have shared with you?

Yes, I had the privilege of meeting Mr. Abdul Muhib Mazumder, Senior Advocate and he narrated to me that one of his juniors Mr. Hayee approached him for appearing in a case for grant of parole. The junior asked him about the grounds to be taken in the Petition. He advised him that he can take any standard ground like death in the family, marriage in the family or any other emergency. His junior assured him that he will be taking very good ground. The matter was filed and listed before a Division Bench of the Hon’ble High Court where the Criminal Appeal was pending. The Hon’ble Judges requested Mr. Mazumder to come to page 3 thrice. Mr. Mazumder told the Bench that he will ask his junior about the ground taken by him in the Petition. The Hon’ble Bench still insisted that he should come to page 3 of the Petition in which it was written that the Petitioner’s wife had delivered a baby though the Petitioner was behind bars for more than 4 years.  Mr. Mazumder told the Bench that more the reason for his client to be released on parole. The Hon’ble Judges remarked that your client is already convicted under Section 302 of the IPC and we do not want him to commit another offence under the same Section of IPC. He assured the Bench that his client will behave and will not commit any offence. The Bench remarked that they are granting parole to his client provided he was not arguing his case further.

Arguments in courts among the lawyers of petitioners and respondents or the lawyers and judges are often on very serious matters as a lot remains at stake for both the parties involved. Do you think humour has its own role to play here?

A: Humour definitely brings out the special camaraderie shared by the Bar and the Bench. Even the tensest situations and serious arguments can be handled tactfully by using wit. Further, in our profession, everyone is overworked, all lawyers and judges go beyond their capacity in giving their 100% to the matter, in such circumstances a little bit of humour keeps them going in an otherwise demanding profession.

How do you look at the use of wit and humour in the judiciary today when you compare it with the past? Do you think your legal fraternity is as witty and humourous as it used to be in the past?

Times change and definitely nature of humour changes, so in that respect, it is definitely not possible to compare the humour of different eras, however, the fact that the humour remains shows the healthy camaraderie in the legal profession.

The use of Urdu poetry is another aspect that you have highlighted in the book. Kindly share some of the famous couplets or sher o shayari that judges or advocates have used during the arguments?

I knew that my book was incomplete if I didn’t talk about Akbar Allahabadi who was a session court judge in Allahabad and have written beautiful poetry on the legal profession. He was a satirical poet also.

In one of his poetries, he says

When the first lawyer was born a gleeful Satan exclaimed, "finally I have been blessed with offspring."

You have dedicated one chapter of the book to weird cases that were filed and argued in courts. Kindly share some of them which you find extremely bizarre?

In a bizarre incident, a court in Kollam, Kerala was called upon to decide a 2 year-old case with respect to the ownership of a cow. The dispute was between two ladies- Sasilehkha and Geetha, both of whom alleged to be the owners of the cow. On an investigation by the police, it was alleged by one of the ladies that the mother of the disputed cow was alive. The court ordered a DNA test to be done on both cows. The report showed that the blood samples of the two cows did not match. Ultimately, Sasilekha who was in possession of the cow declared to be the owner of the cow.

In another case, once a man named Lal Bihari found out that when he was 22 years old, his uncle had bribed some officers of the Government to declare him dead, so that he could grab his property. When Lal Bihari found this, he made several efforts to get himself declared alive. It took him 18 long years to prove that he was alive and in these 18 years, he took the following extreme actions to establish that he was alive such as he kidnapped his cousin, bribed a government official, contested elections, applied for his wife’s pension to enter Government Records, and marched inside the state Assembly shouting “Mujhe Zinda Karo” (Make me alive)

He was finally declared alive on June 30, 1994. He now runs an organization called “Mritak Sangh (Association of Dead People)” which has about 20 thousand members which is to help people who have been wrongly declared dead.