The novel, a mystery, thrives on the distance between Noma and Delhi as the key to its narrative. Except for one, most characters in the novel are regular, everyday people. A racy page-turner. 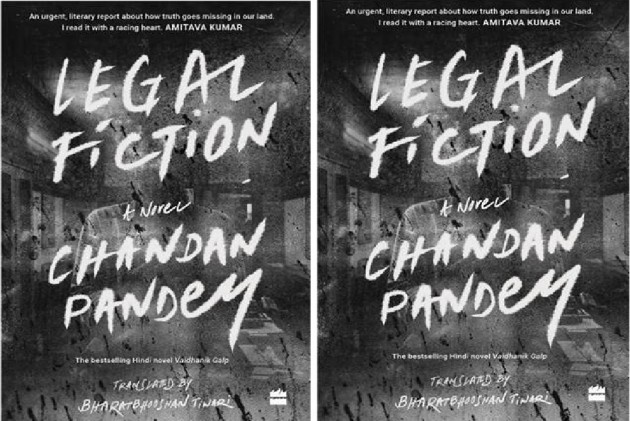 An expecting mother’s husband disappears. Hers was a love marriage and she was automatically estranged from her family. Over and above, there’s pressure from people around.  Helpless and frustrated, she calls a friend, a storyteller who lives in Delhi.

This is how ‘Legal Fiction’ – starts. While reading Chandan Pandey's novel 'Legal Fiction', I was reminded of Milan Kundera; precisely of the message “Man's struggle against power is like the struggle of memory against forgetting”.

When the nation state becomes more powerful than a monarchy, the nation considers every effort to forget them as its success. Every bit of publicity, every bit of power hoarding becomes an attempt to hide their exploits. In such a situation, there is an additional responsibility upon literature and art to expose every power-sponsored falsehood through the art of telling truth.

'Legal Fiction' is one such work. A late-night phone call from his ex-girlfriend Anasuya forces writer Arjun Kumar to leave his wife and home in Delhi and travel to the town of Noma on the UP-Bihar border. The reason: Anasuya’s husband, Rafique Neel, a college professor and theatre director, has mysteriously disappeared.

The novel, a mystery, thrives on the distance between Noma and Delhi as the key to its narrative. Narrator Arjun is a person who believes in the 'system'. On the other hand there is a private university owner who keeps the 'system' in his right pocket. Except for one, most characters in the novel are regular, everyday people. There is one who manages to live his life despite the 'system'.

His education, his preparation, his inclination towards humanity fills him with light in an obscure town. He is an ad-hoc teacher in a college, runs a drama troupe with the students and believes in the primitive form of drama or street plays. One day, he decides to use an incident that takes place in the city to make people aware.

He dramatises the event and starts staging it on several occasions. But slowly the characters start disappearing. You can read the story in a novel, but the play starts becoming a part of public memory. It is exasperating to be made a weapon of memory against obliviousness.

Soon after he arrives, Arjun realizes that things are not as they seem: the police refuses to register a missing-persons’ case. Rafique’s student Janaki has also disappeared, and the locals are determined to turn it into a case of ‘love jihad’.

When Arjun begins to dig deeper, what he finds endangers him and everyone around him. The parallel story-tracks on which this novel gallops is the story of Arjuna finding himself with the disappearance of these characters. This novel is also a document of the barbarism of mob justice. The novel is also the story of Anasuya's future life.

In the midst of the entire citizenship debate, Chandan's work - a series of three novels that the author has named - The Citizen Trilogy, is expected become a major intervention. An old story, told anew, the 168-page novel takes hold from page one.

The story of this novel is of mystery, but the aspects of love it touches in life are unique. Mysteries are usually sympathetic to power shields, but 'legal fiction' is different. The separation may have made this novel a favorite of fans of Umberto Eco's novel 'The Name the Rose' and Orhan Pamuk's novel 'My Name is Red'. In both novels, where civilization reviews are taken within the pages - 'Legal Fiction' however goes on dropping hints.

Inspired by facts from today’s India, ‘Legal Fiction’ is a brilliant existential thriller and a chilling parable of our times.

“This is like Kafka in Deoria. Or Camus in the cow belt. But more accurately - Legal Fiction is an urgent, literary report about how truth goes missing in our land. I read it with a racing heart.” Amitava Kumar, author of The Lovers rightly said about the novel.

(Ashutosh Kumar Thakur is Bangalore based Management Consultant, Literary Critic and Coodirector with Kalinga Literary Festival. He can be reached out at ashutoshbthakur@gmail.com)