An act of terrorism involving well-timed serial blasts. There was reportedly an interval of only a few minutes between the two explosions. 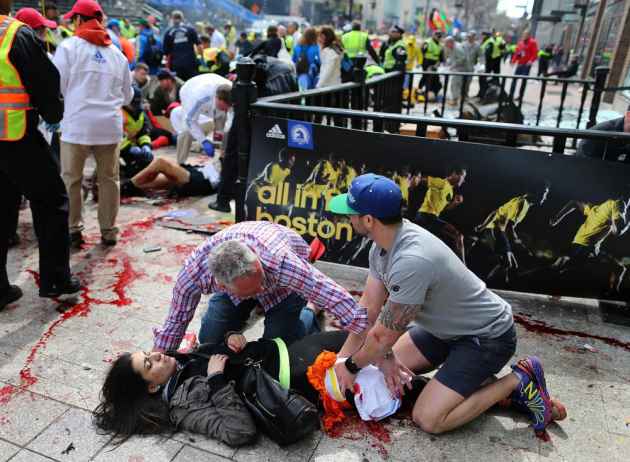 The facts: As reported by the BBC and the CNN:

On 22 December 2001, Richard Reid, a British citizen, boarded American Airlines Flight 63 from Paris to Miami, wearing shoes packed with explosives, which he unsuccessfully tried to detonate. Passengers overpowered him on the plane, which quickly landed at Logan International Airport in Boston, , the closest US airport. He was arrested and indicted. He was reported to have been motivated by Al Qaeda elements in Pakistan.

On December 26, 2009, Abdul Mutallab, 23, a Nigerian, tried to detonate an explosive device, apparently a mix of powder and liquid, on a North-West Airlines flight, coming from Nigeria via Amsterdam, and approaching Detroit. An alert passenger noticed him and he was overpowered. He was believed to have been motivated by Al Qaeda in the Arabian Peninsula.

The Boston Marathon blasts have coincided with a fast reportedly undertaken since March 19,2013, by 24 of the Al Qaeda suspects still held in the Guantanamo Bay detention centre to protest against the alleged inhuman conditions in the Centre. Activists of a Muslim group called Witness Against Torture (WAT) began a hunger strike in solidarity with the detainees at Guantanamo Bay. The group said in its web site: “We will gather for action in New York City, Chicago, Los Angeles and other cities domestically and internationally to denounce the barbaric practice of torture and indefinite detention and to demand justice for the men at Guantanamo.” The solidarity fast by WAT was scheduled to last till March 30. A handful of activists plan to continue fasting every Friday until the prison is closed.

There is so far no evidence to indicate that the Boston blasts might have been linked with the fast. No claim of responsibility for the blasts has been made so far and there is till now no evidence to show whether the blasts were carried out by individual rogue elements with personal grievances or ideologically motivated organisations.

While the US Homeland had previously seen acts of catastrophic terrorism and attempts to commit such acts through aircraft, this is the first time a conventional act of terrorism using improvised explosive devices has been committed, if the involvement of rogue individual elements is ruled out.

The perpetrators, whether rogue individuals or members of ideologically motivated organisations, have succeeded in evading physical security for the Boston Marathon in procuring explosive material, detonators and timers and planting the IEDs without being noticed by the extensive CCTV camera network along the Marathon route.

The local security authorities and the FBI do not appear to have received any advance inkling of a possible terrorist strike either through electronic chatter or from human sources.

The explosions show that despite the strengthening of homeland security in the US after 9/11, terrorists have managed to find intelligence and physical security gaps in the security network and exploited them. The Boston blasts also illustrate the difficulties in preventing conventional style attacks as against sophisticated catastrophic attacks.