Peace is based on the concept of justice, and for most part in India, influential persons responsible for communal violence are never brought to justice. 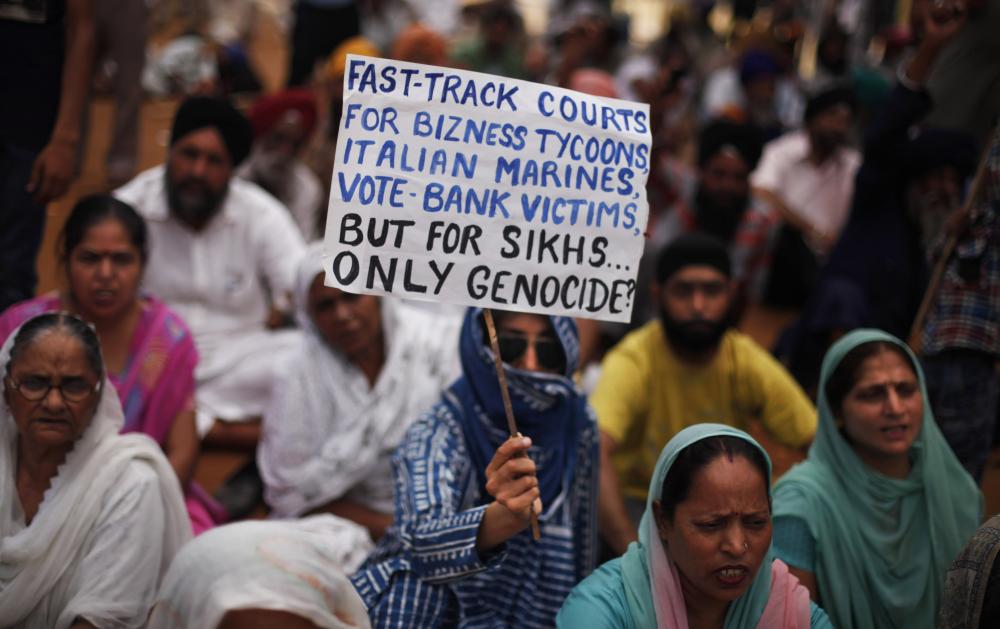 Nearly three decades after India saw one of its worst communal pogroms in 1984, where more than 3000 Sikhs were killed in Delhi alone, questions of accountability for the alleged rioters have surfaced again. The infamous words of Rajiv Gandhi, “When a mighty tree falls, it is only natural that the earth around it does shake a little”, were proof enough of the complicity of the state institutions in carrying out the pogrom. A Sessions Court in Delhi has refused to accept the closure report filed by the CBI in a case of killing three persons at North Delhi Gurudwara Pulbangash on November 1, 1984 in which Congress leader Jagdish Tytler had been implicated as an accused. This reopening of the trial against Tytler and thus a subsequent re-examination of witnesses may well result in a conviction for his participation in the anti-Sikh riots and thus bring some sense of justice. But in a disappointing turn of events, another court in Delhi has acquitted the Congress leader Sajjan Kumar in the 1984 pogrom while holding the other five accused to be responsible for murder and rioting. The anger of the survivors who have been pursuing the cases courageously against Kumar was visible in their interviews to the TV channels when they said that with the acquittal of Sajjan Kumar they had lost faith in the Indian judiciary.

The survivors may not be satisfied by this delayed and little movement towards closure but if the law is finally able to catch up with these two senior Congress leaders, it would certainly be a good beginning. The acquittal of Sajjan Kumar, however, points to the lack of accountability for even serious cases of communal violence, and the unacknowledged struggle of the victim families for justice. Over the years, if accountability for communal " riots" is examined, it becomes evident that punishment for perpetrators of communal violence has been rare. The communal “riots” have always been conducted with a nefarious political agenda where the trigger pullers always enjoy a certain amount of patronage and thus act without the fear of law. In the few cases where perpetrators have been punished, it has mostly been because of the tireless struggle of the victims and their families sometimes supported by public-spirited lawyers and individuals. The fixing of responsibility on the officials and their political managers and holding them accountable for allowing a communal “riot” would alone help prevent a recurrence of such gruesome acts.

During the decade of 1980s, India saw a resurgence of communal and right wing forces, and witnessed several “riots” against the minorities. In fact, there were three major notorious communal carnages perpetuated during that decade: 1983 Nellie massacre, 1984 anti-Sikh pogrom and the 1989 massacre against the Muslims in Bhagalpur, Bihar. Many years later, these sites of communal carnage have seen only a handful of accused being punished. Stories of survivor families of the 1984 anti- Sikh pogrom, and 1989 Bhagalpur massacre highlight the generational impact of the communal violence, as families continue to struggle in various ways even today.

In 1989, over 1000 Muslims were killed in Bhagalpur in Bihar and cabbage grown over their mass grave in order to hide it. The three member Commission of Inquiry that was formed by the then Bihar government to investigate the Bhagalpur riots indicted the then SP of Bhagalpur, K.S. Dwivedi. This official Commission didn’t mince any words and its conclusion was unambiguous. “We would hold Dwivedi, the then superintendent of police, Bhagalpur, wholly responsible for whatever happened before 24 October 1989, on 24th itself and [after the] 24th. His communal bias was fully demonstrated not only by his manner of arresting the Muslims and by not extending them adequate help to protect them,” the report submitted by the Commission of Inquiry said. Yet, Dwivedi has faced no punishment for his actions and remains above the law. Not only has he been recently promoted to the rank of Additional Director General of Police in Bihar but also received the President’s medal for distinguished services in August 2012. What sense of justice would the survivors of communal riots perceive? And more importantly, the impunity enjoyed by Dwivedi comes as a dangerous message to his younger colleagues in the law enforcement agencies.

In fact, this lack of accountability for previous episodes of communal massacres has contributed greatly to repeated instances of severe communal violence. Unless persons and public officials responsible for rioting and killing are punished, it is naïve to assume that there will ever be peace or reconciliation between these communities. Peace is based on the concept of justice, and for most part in India, persons responsible for communal violence are never brought to justice. Also, the issue of institutional reform of the police, which again has been suggested by successive Commissions of Inquiry has not received any attention, and these forces remain unreformed and often communal.

These theories are neither new nor groundbreaking but there is simply no political will to confront the issue of communal violence. More recently, Assam typifies this impunity that fuels cycles of ethnic and communal violence. This is not the first time that districts of Assam have witnessed such serious communal violence. In Nellie, more than 3000 Muslims were massacred in communal violence in 1983. At the time, when all attempts of the then Assam government to cover up the massacre had failed, they were forced to form the Tewary Commission in July 1983 to investigate the communal "riots". Though Tewary Commission submitted its report, it was never tabled before the Assembly or made officially public. Rather than implementing the recommendations of this Commission, successive governments in Guwahati didn’t even place the findings in public domain for a debate. Although the Assam Accord did not pardon heinous crimes, the district courts and administrative machinery interpreted it as a blanket amnesty for all crimes committed during the Assam Agitation, and consequently individuals responsible for the gruesome Nellie massacre were also released. If the perpetrators of the Nellie massacre of 1983 had not received the defacto amnesty, in the garb of the Assam Accord in 1985, and instead were punished for their crimes, it would definitely have been a deterrent for any future violence.

Likewise, the difficult struggle to bring the perpetrators of 2002 communal carnage in Gujarat to justice is still underway and unless the perpetrators, including those at the highest levels, are tried, justice will be elusive for the survivors. The alleged role and responsibility of the Chief Minister Narendra Modi has been documented in various reports and affidavits submitted but until now he has escaped any legal liability for his actions.

Why is it that despite irrefutable evidence that these communal riots continue to tear apart the fabric of the Indian society, measures are not taken to contain these situations of violence and punish perpetrators of this violence? Why hasn’t a Communal Violence Bill that would prevent acts of communal violence, as well as hold to account public officials and others who failed to stop these massacres, been yet legislated? The Communal Violence Bill, it is hoped, would provide a framework for preventing and prosecuting mass crimes when they happen. What investigations have shown is that if the perpetrators are influential political leaders then the natural tendency has been to subvert any process of justice. Unless we provide justice and reparations for communal violence in India, it would continue unabated, as we saw in Assam last year.

Until influential individuals like Jagdish Tytler, Sajjan Kumar, Narendra Modi and K.S. Dwivedi are brought to justice, we will remain a society that fails to consistently uphold the rule of law for serious crimes and these episodes of violence will continue to recur. The only way the communal " riots" can be prevented is to make them both legally and politically untenable. This is only possible if these cases are taken to their logical conclusion. There are no shortcuts. The wounds of the survivors may heal with time but forgetting and moving on without justice would never help, it would only encourage a recurrence.

Warisha Farasat, a lawyer, is with the Centre for Equity Studies working on issues of mass crimes and accountability