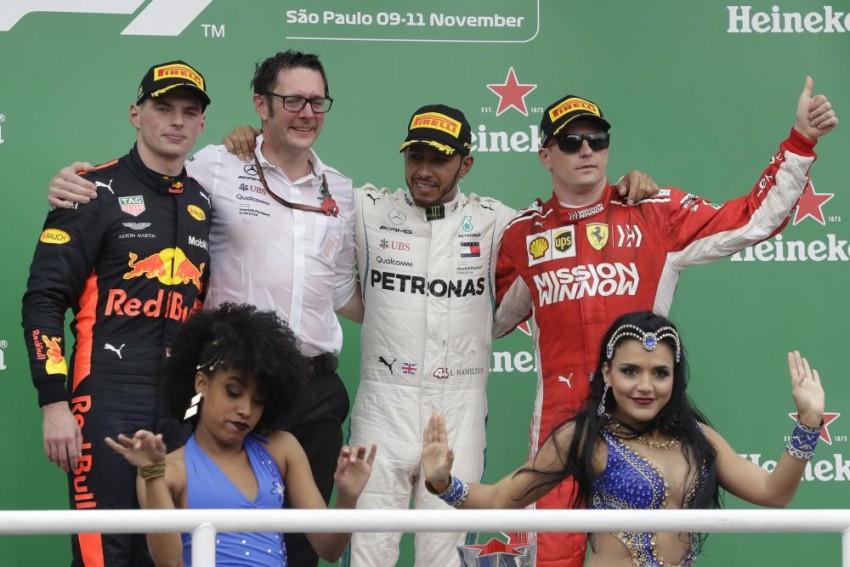 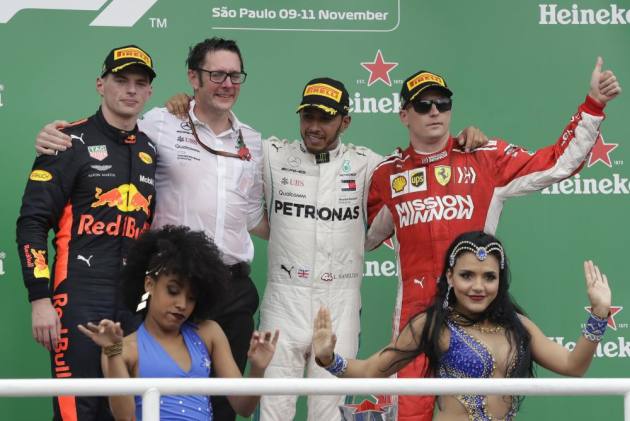 The livid Dutchman, 21, had earlier said he did not see the Frenchman in the paddock after the race, but made no effort to avoid him in the drivers' weighing room where he walked straight at him.

"We were at the scales room," said Ocon.

"He wanted to punch me. He pushed me and he was wanting to be violent. It was not professional."

Ocon added that his rivalry with Verstappen "goes back a few years" and said he "has always been the same".

"I was behind Max for two laps," Ocon told Sky Sports.

"I'm used to the fights with Max. He's always been the same. It goes back a few years."

Verstappen swore so much on team radio that his comments bleeped out after he described him as an "idiot".

Ocon was given a 10-second stop-go penalty by the race stewards for causing the collision.

A video clip of the post-race incident went viral soon afterwards but Verstappen said he had no regrets.

'I don't care what people say'

"He came out of the pit lane and he had the right to overtake, but the level of risk he was taking, it was not right," he explained.

"The stewards gave him a penalty. You can say, 'Max, you should have given room', but we were not racing and you don't expect that."

Asked about confronting and pushing Ocon, he said: "We are all passionate about the sport, but it would be odd if I shook his hand. I don't care what people say.

"I'm a winner. To get taken out by that and to get a stupid response from their side, I was not happy about that."

Verstappen told his team over the radio on the slowdown lap that he had better not bump into Ocon because there could be trouble.

The Ocon incident overshadowed a brilliant drive from Verstappen who had charged from fifth on the grid to take the lead.

"The car was working brilliant today. I don't know what to say. I am happy for second, but we should have won," added Verstappen.

"He's driven his heart out with a damaged car -- Esteban was lucky to get away with a push to be honest. Emotions are running high and I told him to just get yourself under control on the cool down lap.

"Max has lost a victory through no fault of his own today. What on earth Ocon was thinking there, it just beggars belief. Why on earth is he racing the leader?"

Later Sunday, Verstappen was ordered by the FIA to perform "two days of public service" as punishment for the incident.

Verstappen was "extremely upset by the incident on the track" and the stewards said they accepted his explanation that it was not his intention to strike Ocon, but that he was 'triggered' and this caused him to lose his temper", said a statement.

Meanwhile, 33-year-old Hamilton took advantage of the collision that cost Verstappen the lead in the closing stages to regain the initiative and then hang on with worn tyres as the Red Bull came home second.

Kimi Raikkonen finished third on his 150th start for Ferrari ahead of Daniel Ricciardo in the second Red Bull, Valtteri Bottas in the second Mercedes and Sebastian Vettel who came home sixth for Ferrari.

The result ended Ferrari's hopes of stopping Mercedes' title triumph, brought Hamilton his 10th win of the year and 72nd of his career. It was also the first time he had won a late-season race after winning the drivers' title.

"It was an honour to drive for them (Mercedes) today," said Hamilton.

Charles Leclerc finished seventh for Sauber ahead of the two Haas cars driven by Romain Grosjean and Kevin Magnussen with Sergio Perez 10th for Force India.