Breaching 90m will put me in list of world's best throwers, says Neeraj

Neeraj, who clinched the historic gold with a throw of 87.58m in his second attempt at the Tokyo Olympics, has been eyeing the coveted 90m for quite some time now. His personal best is 88.07m. 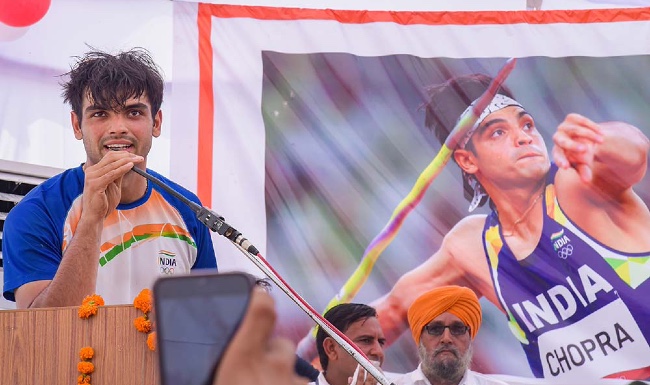 An Olympic gold medal already in his pocket, star Indian javelin thrower Neeraj Chopra has his eyes set on breaching the 90m mark which he feels will get him an entry in the list of world's best throwers.

“Medal is one thing, distance is another. Crossing the 90m mark will put me in the list of the world's best throwers,” Neeraj said during a virtual media interaction. “I am close to it and can hit the mark soon, but I don't think about too much. But there is no pressure on me that if I don’t reach the mark then 'gadbad ho jaega'.”

The 24-year-old is confident that the mark is around the corner and certain tweaks in his technique will help him achieve his goal. “The gap is of about 2m. It’s not too less also but I don’t think it’s impossible because my training is good. I don’t think about it much but it’s a barrier that I’d like to breach this year."

“No major changes in my technique, I'll need to improve what I am already doing. I'll also look to work on explosive strength, core strength and speed as these factors will add up and the distance will be covered,” he added.

Neeraj, who had ended India's 100-year wait for a track and field medal in the Olympics, revealed that he gained over 10kg after the Tokyo Games. “I ate everything I wanted to after I came back from the Olympics, I did not hold back because I was controlling for so long. I had gained close to 12-13 kgs.

Neeraj had decided to end his 2021 season after the Olympics but having returned to training at Chula Vista, USA now, the 2018 Commonwealth gold medallist is back to his off-season weight but it wasn’t an easy task.

“I've been training for about 22 days now and have cut down 5.5 kgs so far and now my weight is close to the off-season weight." “The initial few days of training were hard, my body would hurt and the workouts felt very difficult. I had to put in a lot of effort. I was always physically tired but I pushed through despite being exhausted. I'm training hard now so that I can get to javelin-specific training soon.”

Neeraj, also a junior world champion, is now bracing up for a packed 2022 calendar that includes the Commonwealth and Asian Games, World Championship and the Diamond League. He is well  aware that the competition will be tough.

“There are a lot of athletes who have already thrown above 90m. Athletes from the junior (Worlds) are also there like Anderson Peters from Grenada. He is also near to 90m." "Johannes Vetter is giving a good performance. So, competitions will be very tough. We’ll see when the season starts what happens.”

Asked what changes can be brought to the Indian sporting system to make it better, Neeraj said international exposure is a must for elite athletes doing well and also those who are coming up. “I think elite level athletes should get more competitions and especially international competitions. Right now, only the best athletes get them."

"But I feel the upcoming athletes should also get international exposure, experience of playing among the best athletes. Once they play with them then they can think at that level, they will get motivated after looking at their competitors."

To promote javelin throwing amongst children, Neeraj feels it imperative that a coach for guidance and equipment is made available. “For kids who are coming in now, facilities should be increased in normal grounds. Javelins should be provided because it’s an expensive equipment and a coach for guidance. This I feel will change a lot of thing in the future."