Breaking The Norm Within RSS

Mohan Bhagwat, who is referred as Param Pujya within the Sangh and the BJP, was at his usual best for his views, style, confidence, clarity of thought and crisp responses laced with anecdotes and humour that led to burst of laughter and thunderous applause 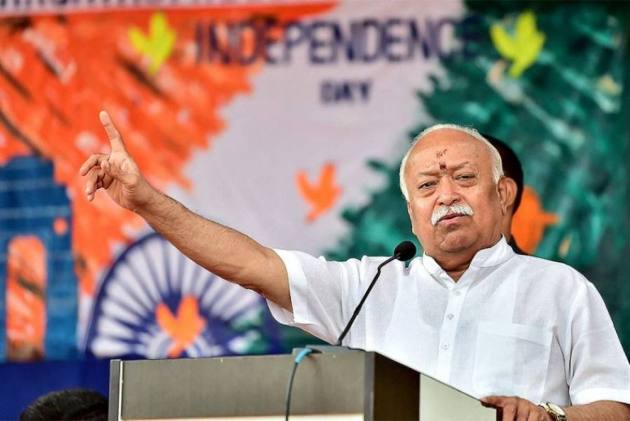 September 17th-19th saw the Vigyan Bhawanwitness a rare VVIP event and break its norm of being normally used for Government functions, for the conclave: ‘Future of Bharat –  An RSS Perspective’. This conclave also signaled breaking the norm within RSS and the heralding of a new era for the RSS. The event, aimed at outreach and awareness of RSS, was graced by high profile prominent leaders from all walks of lives, including foreigners and people from other religions. The passes for this function were in great demand, but no one knew how and where to secure a pass! I was lucky enough to get one, and so I made it to this historic conclave!

Mohan Bhagwat has maintained his uniqueness as being one of the youngest RSS Chiefs, and became the first RSS Chief to address a press conference, after taking over as the Sarsanghchalak in 2009. He has been constantly working to take RSS to new levels, breaking the rigidity and opaqueness surrounding the RSS. When two years ago Bhagwat announced a change in RSS’s Ganvesh (uniform), first time in more than 90 years of RSS, many thought it was just the uniform, but it was a signal of the imminent change in the soul of RSS, in the way it thinks about various issues,and moving away from being a closed and a rigid organization, and this was amply evident in the articulation of RSS views on various issues.

The first two days had the visionary address from the RSS Chief on the future of Bharat, Hindutva and the RSS, but this workshop was much beyond these three topics. It was actually a signal of the new vision of RSS going forward - a sea change. Bhagwat, who is referred as Param Pujya within the Sangh and the BJP, was at his usual best for his views, style, confidence, clarity of thought and crisp responses laced with anecdotes and humour that led to burst of laughter and thunderous applause. He answered all the questions which probably could have created ‘breaking news’ for the responses, but it was Bhagwat’s command over the topicsthat created a new outlook for RSS.

Many times,when a tough question was posed, the lady sitting behind me said, ‘OMG, this is a tough question to answer’. Even I was a little shaky on how Bhagwat would respond to such tough questions in an open workshop, with people of diverse ideologies and opinions, but Bhagwat’s response silenced his worst critics. He took all the questions with ease: be it the issue of Kashmir, Ram Temple, Uniform Civil Code, Articles 370, 377 & 35A, falling standards of education, RSS & politics, reservation, forced conversions, safety of women, cow protection and lynching, Saffron Terror, Hindu Rashtra, minorities, NOTA, internal security, population control, FDI, Presidential form of government; among others.

Bhagwat’s qualification and experience as a doctor, mixed with his statesmanship, was visible in his handling of the most difficult questions with accurate diagnosis & prognosis. All his answers were aimed towards peace, inclusiveness and development, with the overarching thought of unity in diversity, and respecting constitution and consensus. This was not an internal RSS event but an event with known critics of RSS / BJP visible in the audience, but at every answer on the third day evoked thunderous applause with intermittent burst of laughter for the humour. On the issue of NOTA, he said: NOTA leads to ignoring the available best and benefits the available worst.

When someone asked ‘Why it is that the BJP always has its Sangathan Mantri from the RSS, Bhagwat responded by sayng ‘They (BJP) ask and we give,and if other parties also ask and if the cause is good, we will consider’. The packed hall echoed with burst of laughter. For Lord Ram, Bhagwat sent a firm message when he referred Lord Ram as, ‘Imam-e-Hind’.

Bhagwat did not shy from accepting that all of Gowalkar’s views were not relevant today, and that Hedgewar had given the direction to change with times. He also gave a terse message to people to avoid using optics for politics,as politics is a means for welfare of masses.

Bhagwat made it clear that RSS was a force, but not a power centre. Further, he made an open call to people to come and see RSS from within to understand it, rather than getting convinced from his talk and forming opinion from outside.

Reporters who are looking for controversy were a little uneasy. One leading political editor remarked ‘What a clarity of thought and firmness in views’!

Towards the end, it was raised that in Sangh, there is an unwritten rule that:‘Suchna mile to Sochna Bandh’(When you get the direction / news, you stop thinking), and the very next day I was at the residence of a Cabinet minister and the reporter asked his views on the address of RSS Chief. The response was ‘Bhagwat ji is Param Pujya for us and the question of commenting on the same does not arise’.  So, the message is clear, the words of the Chief are final, and through this conclave, he succeeded in breaking the wall around RSSand converting it into a bridge.