This is the second bridge collapse incident in West Bengal this week. 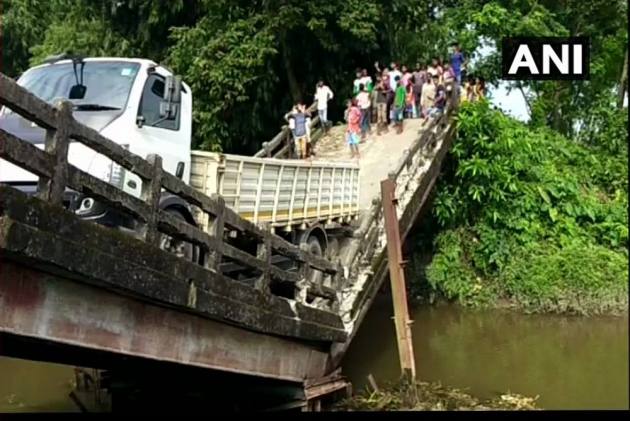 An old bridge collapsed near Siliguri in north Bengal on Friday, leaving a truck driver injured, a state minister said.

This is the second incident of bridge collapse in the state in three days. The Majerhat Bridge collapsed in South Kolkata on September 4, killing three persons and injuring 24.

The middle portion of the structure near Siliguri collapsed on a canal below at around 9.30 am when a truck was crossing it and the vehicle is stuck in the broken portion of the bridge.

The bridge connects Manganj and Phansidewa areas to Siliguri, a major city in north Bengal. Phansidewa is around 22 km from Siliguri.

"The movement of loaded trucks is banned on this bridge but many such vehicles bound for north-eastern states continue to take that bridge. This accident is a result of that," North Bengal Development Minister Rabindranath Ghosh said.

#WATCH: A pregnant woman being carried by her relatives through a forest for 4 km in Vijayanagaram district due to lack of road connectivity. Hospital was 7 km away from the village but she delivered midway & returned. Both the baby & the mother are safe. (4.9.18) #AndhraPradesh pic.twitter.com/fvGZlYwDCl

He said this bridge was constructed long back and papers of the structure are not available. Repair work of the bridge will be undertaken after the PWD prepares a report, he said.

Tourism Minister Gautam Deb said the bridge was maintained by the Siliguri Mahakuma Parishad (a sub-divisional body), run by the CPI(M)-led Left Front.

"I will report to Chief Minister Mamata Banerjee," Deb said.

Engineers and state government officials have rushed to the spot.

"We had informed the state and the local administration that it needs to be repaired. But as it is a Left-run Mahakuma Parishad, funds were not released by the government," Sarkar said.

An under-construction flyover also collapsed at Phansidewa on August 11, but there had been no casualty.

The chief minister Thursday said nation-wide survey of bridges should be undertaken.

She said there are 20 bridges in and around Kolkata which have crossed their expiry dates.