Bring Back The Middlemen, Please!

India is a land of brokers. Middlemen and facilitators lurk here in every corner and thrive on commissions. So why is it a surprise that a helicopter deal would have middlemen? 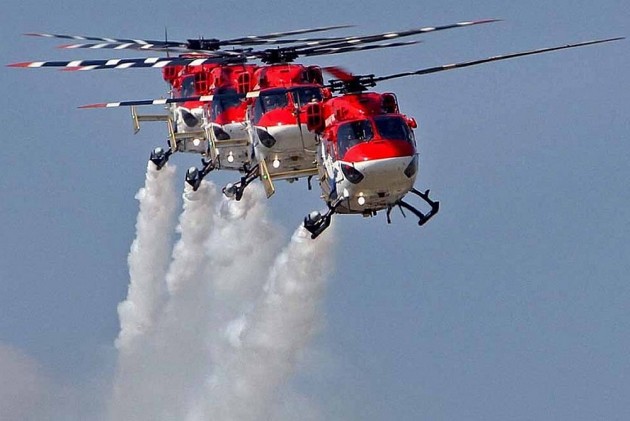 We should legitimise middlemen in defence deals if we are not going to make ourselves a laughing stock over and over again ! In the land of the corrupt, it's better to keep middlemen out in the open!

It was amusing to watch Arnab Goswami on Times Now grill Congress leader Ahmed Patel on television. "Now Mr Patel, Mis…ter Patel, Mister Pat..el, do you want me to believe that all this happened without permission from Sonia Gandhi?" purred the celebrated anchor.

Mr Goswami was referring to the decision in 2006 to reduce the altitude required to be attained by helicopters in the VVIP fleet from 6000 feet in 2002 to 4,500 feet in 2006. He obviously believed that the altitude requirement was reduced at the behest of the Congress president. "Wasn't she also the UPA chairperson at the time and the de facto Prime Minister?", he seemed to suggest.

I did not wait to hear what Mr Patel replied because I switch on Times Now only to see what is being discussed and even more importantly I was chuckling at the thought that the Mi-8 helicopters the Indian Air Force was using in 2002 could fly only up to a height of 2000 feet. I wished the anchor would ask for some light on why 6,000 feet was recommended in the first place.

It had apparently been argued that VVIPs ( how many VVIPs do we have ? A dozen ?) may have to visit remote hilly areas in the North and the North-East. Only one manufacturer, Eurocopter, was producing helicopters which attained that kind of altitude at the time. By reducing the required altitude requirement to 4,500 feet in 2006, the Government presumably made it more competitive and reduced the price to be paid for each of the helicopters. Prices of helicopters, I guess, do have a bearing on the height they can attain.

Seventeen years after the IAF first raised the demand to augment its VVIP fleet, India is still without those 12 helicopters barring the three AW-101 which were delivered by AgustaWestland and which were then confiscated by the ' çorrupt' UPA Government. So it would seem that the VVIPs did not need those 12 helicopters after all. But over the past few weeks, what a great deal of fuss has been made over the helicopters which were neither delivered nor were paid for! Because the UPA Government claimed to have recovered the 45% advance paid to the company by encashing the bank guarantee.

While watching grim anchors on TV and BJP ministers and spokesmen bristle with righteous indignation at "middlemen" this past week, I felt like doubling up with laughter. Let me explain. In a country where brokers and middlemen are ubiquitous, these ladies and gentlemen seem so horrified at the idea of middlemen as if they have heard of them for the first time. Let us face it. If England was a nation of shopkeepers, India is a land of brokers. Middlemen and facilitators lurk here in every corner and thrive on commissions. So why is it a surprise that a helicopter deal would have middlemen ?

Of course there is a reason. It is because like the three monkeys of Mahatma Gandhi, our political establishment has decided to neither see nor hear of middlemen in defence deals. They may flourish in the energy sector, the infrastructure sector etc and may deal with fertilisers to public buses; but defence deals must not have any middlemen. Actually they can and there are any number of them. But officially none of them exist because they had not registered themselves with the ministry. And for a good reason.

The ministry wanted them to open their books, confide the commission that they have been pledged and the commission they were paid for previous deals ! Whoever thought up these conditions ensured that on paper, there would be no middlemen in defence deals. So much so that the Government of India signed a 'pre-order integrity clause' with the Italian firm Finmccanica. This is the clause that was invoked by the UPA Government to encash Finmeccanica's bank guarantee after Italian media blew the lid of kick backs having been paid.

At this point it is worth keeping in mind that Finmeccanica is a multinational company with over 100 years of experience in aerospace. It has been manufacturing helicopters in various countries including the UK and the USA. And it is nobody's case, I guess, that the AW-101 AgustaWestland helicopter was not a quality product. The Finmeccanica website carries details of its products and its helicopters are priced between 18 and 90 million US dollars each and used by coast guard, police and various other agencies in the United States and several countries in Europe.

All defence deals involve a large number of bureaucrats, domain experts, defence personnel and several influential cabinet ministers including the Prime Minister, Defence Minister and the Finance Minister. It is safe to assume that at least some, if not all of them are not averse to allurements.

But the allurement need not always be in cash. For example, a foreign company can offer to finance the education of children abroad. Or they can offer suitable jobs for them or secure scholarships. Just as the Government requires public servants to disclose their assets every year, it might just open a Pandora's box if they are also required to reveal how many of their children study and work abroad and for which companies. Let us not forget that the CBI's case against the former Air Chief Marshal S.P. Tyagi in the AgustaWestland deal is that he visited Italy thrice after retirement and that the Italian company entertained him with an evening at the opera. Tickets for Opera or even a football match in Europe can be prohibitive and the poor former IAF chief, I am sure, is not the only Indian who has accepted such hospitality. But does that prove criminality ?

The country will in fact be better off legitimising middlemen in defence deals. They will get paid by foreign companies in foreign exchange and they would have to declare their earnings and pay a hefty tax on that. This would also reduce their need to keep sundry politicians and officers in good humour. Or else allegations will keep surfacing without any closure and India will remain among the countries , if there is any other, which take 17 years to finalise the purchase of 12 helicopters.