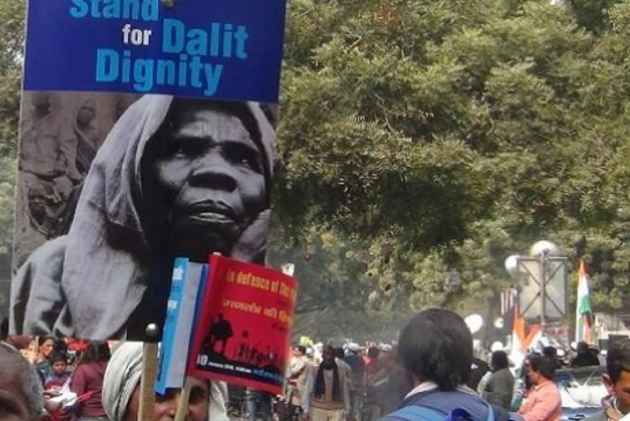 Leaders of various Dalit organisations today demanded that the Centre immediately bring an ordinance to restore the status quo of the Scheduled Castes and Scheduled Tribes (Prevention of Atrocities) Act.

They also urged the Union government to include the Act in the Ninth Schedule of the Constitution.

The Ninth Schedule provides protection to legislations placed under it. A law placed under the Schedule is not open to judicial scrutiny.

At the meeting in Delhi, Dalit leaders announced they would observe April 14 as "Protect Constitution Day" across the country.

"The government should issue an ordinance to maintain and restore the status quo of the Scheduled Castes and Scheduled Tribes (Prevention of Atrocities) Act and put the Act in the Ninth Schedule on the Constitution. We have decided to hold an unified action on April 14 as Protect Constitution Day on Ambedkar Jayanti," Srinivas Rao, Dalit Shoshan Mukti Manch leader, said.

Political leader and activist Prakash Ambedkar, who presided over the meeting, said the government should bring a legislation in the Monsoon Session of Parliament to ensure adequate representation of SCs/STs, Dalits and adivasis in the judiciary.

Ashok Bharti of the National Confederation of Dalit and Adivasi Organisations supported Ambedkar's demands. "Since judiciary is not reforming itself, Parliament should bring a law in the Monsoon Session to ensure that there is an adequate representation of the marginalised (sections) in the judiciary."

The Dalit leaders have threatened street protests if the prime minister does not announce the government decision on August 15, from the ramparts of the Red Fort, to resolve their demands.

The Dalit leaders' demands came after the Supreme Court on March 20 "diluted" the provisions of the Act, ruling that government servants should not be arrested without prior sanction and private citizens, too, can be arrested only after an inquiry under the law.

Today, the Centre told the Supreme Court that its judgement on the SC/ST Act has "diluted" the provisions of the law, resulting in "great damage" to the country, and steps may be taken to correct it.