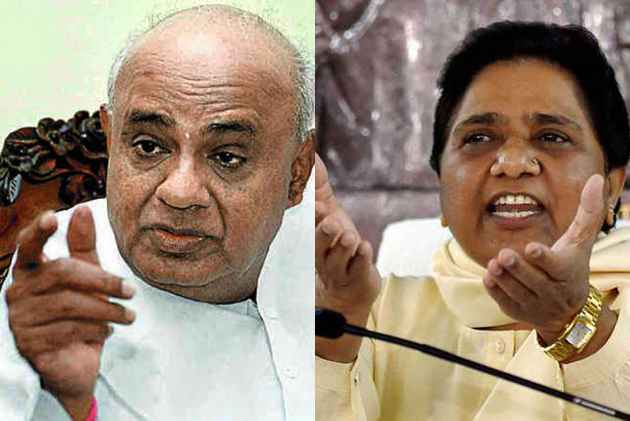 The BSP and the JD(S) today announced that they are entering into an alliance to contest the Karnataka Assembly polls that would continue in the 2019 Lok Sabha elections as well.

At a press conference in New Delhi, Satish Chandra Misra of the Bahujan Samaj Party and Danish Ali of the Janata Dal (Secular) said the BSP will be contesting from eight reserved and 12 general Assembly constituencies spread across 14 districts of the state. The JD(S) will fight for the remaining 204 seats, aiming to form government under the leadership of JD(S) state chief H D Kumaraswamy, the leaders announced.

The term of the 224-member Karnataka Assembly ends in May.

The national presidents of both parties, H D Deve Gowda and Mayawati, will launch a joint campaign for the Assembly polls on February 17 from Bengaluru.

Describing it as a "path breaking" move, Ali said the alliance would have larger ramifications for Indian politics.

It had the potential to "thwart attempts of two bigger national parties to isolate regional parties", he said.

"This is the first time that the BSP, under the leadership of Mayawati, is getting into an electoral alliance with us as per our request."

He added that the BSP had a strong base in the state, which had over 22 per cent Scheduled Caste votes.

Asked about BSP's hold in Karnataka, Misra said the party had scored well while fighting independently in several constituencies.

"We had representation in the Karnataka Assembly in 1999. BSP has performed well even in states like Telangana, Gujarat, Maharashtra and Jammu and Kashmir," he said.