Buddhist Monks Are Learning Science At A 'Mini Cosmos' Near Mysore

Even though intellectual advancement is key for the students from Sera Jey School, many want to use their science education to serve humanity. 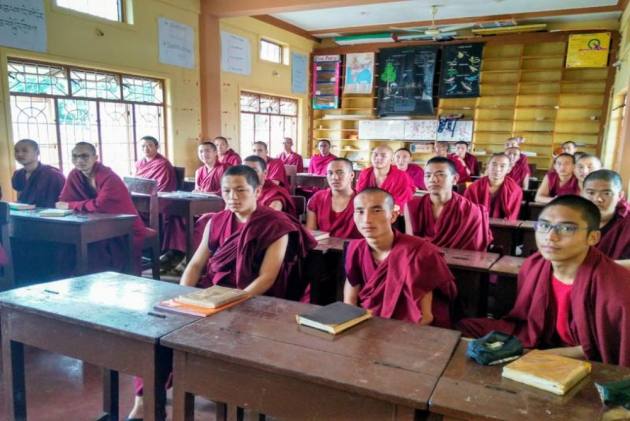 Going against the grain of conventional thinking, Jampa Dhondup believes science and religion are part of the same ecosystem. “By developing a questioning mindset, we can take leaps in the spiritual sphere,” says the 19-year-old monk who migrated to India from Tibet in 2006.

The other student monks at the Sera Jey Secondary School in the verdant Bylakuppe Settlement, dotted with coffee plantations outside Mysore district, agree with Dhondup. Science is a way to advance Buddhist philosophy, they say.

Dhondup wants to become a neuroscience researcher. He thinks more than ever now Buddhists are using scientific tools, and scientists are using Buddhist wisdom to uncover truths about the human mind. “While studying the brain and human behaviour, we can’t exclude the exploration of experience. That’s where Buddhism and science meet,” he says.

So, to explore new learning at the frontiers of science and Buddhism, student monastics are relying on India’s first dedicated science centre at the Sera Jey Monastic University. They call it their “mini cosmos”—a place where they can hone their scientific temperament and rethink Buddhist philosophy.

Lopsang Samten, a 19-year-old student monk from Arunachal Pradesh, is convinced the dialogue between science and Buddhism will take leaps in the years ahead. “It will upturn people’s understanding of consciousness and the material world. The centre is the fulcrum of change,” he says.

The awakened consciousness among students has invigorated the Tibetan settlement area in Bylakkupe flanked by low-lying mountains. Here, the unsuspecting traveller is greeted by colourful flags, prayer wheels and monks in their trademark maroon and yellow robes chanting prayers to the soul-pacifying sounds of the monastery bells.

Yet, the buzz around the science centre at Sera Jey is palpable. Monks are found discussing research initiatives and teaching methods to spark new horizons of thinking among students. “We want our classrooms to be livelier and inspire students to think out-of-the-box,” says Kalden Gyatso, a physics teacher at the centre.

Teachers like Gyatso believe the monastic science centre is a major landmark in the university’s academic development. Since 2013, student monks have been relating to their philosophical study topics here through debates, seminars, exhibitions and lectures. “We want students to understand the world through reason, not blind faith. Buddhism, after all, is about reason and individual feeling,” says Geshe Ngawang Sangay, the Director of the Sera Jey Secondary School.

Driven by the Dalai Lama’s personal interest in science, the new discipline was introduced at the Tibetan Buddhist monasteries back in 2000.

Increasingly, science classes were organised at the monasteries through logistical, financial and professional support from organizations such as Science Meets Dharma and Science for Monks—a project of the Library of Tibetan Works and Archives. The Emory-Tibet Science Initiative, a two-way exchange of people and ideas, also lent its support. Selected student monks could get scholarships for science study at the Emory University in the United States and then impart their training at science centres back home.

The Science for Monks Project was initially an effort to understand aspects of scientific knowledge that could hook scholarly monks from different traditions. But scholars also realised the importance of raising curiosity about Buddhist philosophy through a new prism, without harming the rootedness of monastic education.

The science centre encourages scholars to take on leadership roles and share their perspectives on topics salient to the intersection of Buddhism and modern science.

Tashi remembers the excitement among student monks during their three-day exhibition in 2015, inaugurated by the Dalai Lama. “They put up a series of displays to illustrate the impact of climate change and came up with innovative ideas. Impressed by these projects, the Dalai Lama told the students to learn from the historic Nalanda University in Bihar, where the five sciences were studied extensively.”

Even though intellectual advancement is key for the students from Sera Jey School, many want to use their science education to serve humanity.

Lobsang Dana, a 19-year-old monk from Ladakh, embraced monastic life in 2010 not knowing where it would take him. But now he wants to specialise in neuroscience led by a greater calling. “I want to serve in Iraq and Yemen where wars have taken major tolls on people’s lives. I want to understand the psychological costs of war not only as a spiritual leader, but also as a neuroscientist,” he says.

Dana’s classmate Lhakpa Tsering also dreams of becoming a physicist one day. “During my childhood I used to stay with hermits, and I learnt a lot about Buddhist philosophy from them. But a part of me was always curious about how the universe works,” he says.  After completing his monastic education, Tsering wants to go back to his village in Arunachal Pradesh where there’s a scarcity of trained physicists. “I want to use mathematical models to understand natural phenomena. I’ll use that knowledge to turn around the lives of villagers in remote areas,” he explains.

The students at Sera Jey School are counting on science to evolve as spiritual leaders. But they are even more determined to break the notion that science is incompatible with religion. “Both science and Buddhism are founded on faith—on the belief in the existence of something unexplainable outside the order of the universe. It’s time people understood that,” says Dhondup.