A Tale Of Two Dreams

Shooter Avani Lekhara’s name will go down in history as India’s first woman who won a Paralympic gold. But the 20-year-old has one more dream to chase and is just getting started. 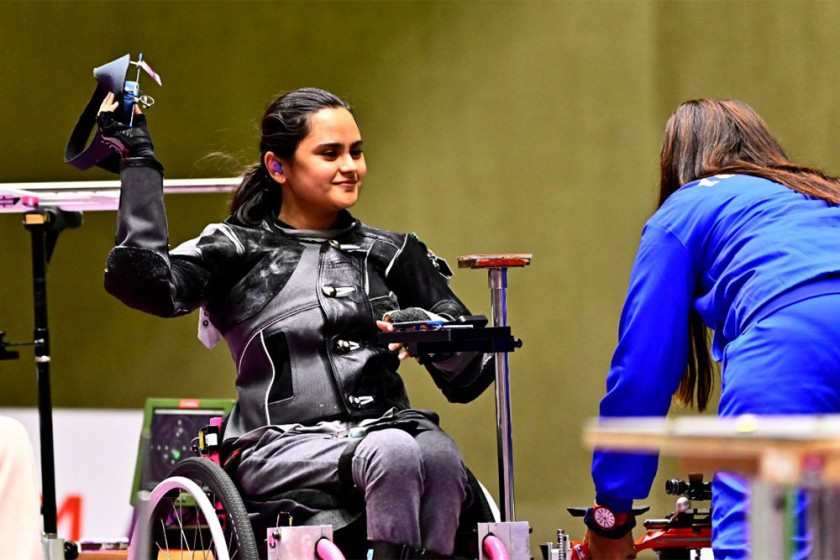 An Indian shooter who also wants to become a judge? Avani Lekhara, India’s first woman to win Paralympic gold, surely knows how to stick out. After her win this year, Lekhara has become a name no less famous than Neeraj Chopra who became India’s first athlete to win an Olympic track and field gold in javelin in Tokyo 2020.

India’s Paralympians won a record 19 medals in Tokyo this year and Avani was one of the five who grabbed a gold medal. From attending the PM’s party to receiving the Khel Ratna, baby-faced Avani has been the cynosure of all eyes. But even in the midst of all that, the ever-smiling Jaipur girl has shown immense composure, a virtue that led her to the historic 10-metre air rifle gold with a world record score at Japan’s Asaka Shooting Range on August 30. Avani had also won a bronze in the R8 women’s 50m rifle 3P SH1 event. However, there is something deeper beneath Avani’s cheery smile.

For someone who recently celebrated her 20th birthday, she comes with a maturity that defies her age. “I want to be a judge,” she says. “I try to balance my shooting training and my law classes. One goal has been realised but the dream to become a judge remains,” says Avani who is currently undertaking the five-year integrated BALLB course at the University of Rajasthan. Avani was left paralysed from the waist down following a car accident in 2012 which had resulted in a spinal cord injury.

She had taken up shooting as a hobby in 2015. The first tournament that she had participated in — a local event in Jaipur where she represented her school, Kendriya Vidyalaya No. 3 — Avani was pitted against able-bodied shooters and had stunned everyone by winning the gold medal. For Avani, it was vindication of her ever-supportive parents’ faith. The real turning point for Avani came with a silver at the World Shooting Para Sport World Cup, her first international competition in 2017. It gave her the confidence to compete against the best in the world. Despite a medalless 2018 during which she even contemplated giving up the sport, Avani turned her career around by winning the Tokyo Paralym - pics quota in 2019. COVID-19 blighted her prepa - ration in 2020 but Avani trained hard in her homemade range. “I have no regrets. Yes, I used to think a lot about these things in the initial days. Shooting was hard. Being a wheelchair user and going out to shoot, I was low on confidence. But that school event acted like a tonic. Starting from there and winning a Paralympic gold six years down the line has been quite a challenging journey. Now I am enjoying the fruit of the hard work and sacrifices my parents, coaches and I made,” says Avani.

While she may have been inspired by 2008 Beijing Olympics’ shooting champion Abhinav Bindra, she wants to leave her own mark. Avani is already dreaming of winning multiple medals at the 2024 Summer Paralympics in Paris. Interestingly, Avani doesn’t believe in hero worship and she has no definition for a role model. “Every individual is unique. I want to be known as Avani Lekhara, no one else. Yes, Tokyo was my first Para - lympics but there is still a lot to achieve. There are errors to rectify and I will be satisfied the day when I know I have been able to erase them all and win more medals for India,” says a gritty Avani.