Audi, Mercedes-Benz Optimistic About Electrification Of Passenger Vehicles In India

While Audi kicked off its electrification journey in India with the launch of three all-electric SUVs under the e-Tron brand last week, Mercedes-Benz has been selling its all-electric SUV EQC since October last year. 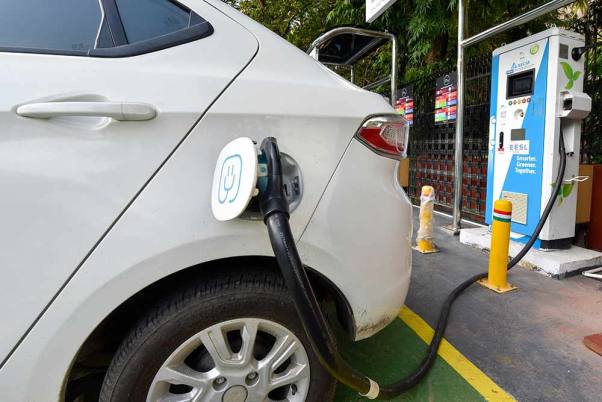 Luxury carmakers Audi and Mercedes-Benz are upbeat about the electrification journey of passenger vehicles in India with more states coming up with EV policies that encourage electric four-wheelers, according to company officials.

Although the FAME II scheme by the Centre has not offered direct benefits for personal passenger vehicles, incentives like 5 percent GST on electric cars will also help, they feel.

While Audi kicked off its electrification journey in India with the launch of three all-electric SUVs under the e-Tron brand last week, Mercedes-Benz has been selling its all-electric SUV EQC since October last year.

Audi India Head Balbir Singh Dhillon said while the overall policy at present has focussed primarily on the two-wheelers and three-wheelers, many of the state governments are also coming forward to give incentives to electric cars.

"When the states have already declared there won't be a registration cost on the cars. You already know the GST on electric cars is 5 percent. So these are already certain incentives the government has put in place, which will also encourage luxury players to also sell cars in the electric segment and these are definitely positive steps," he told PTI.

Recently states like Gujarat and Maharashtra have announced their respective EV policies.

Gujarat has offered demand incentives of Rs 10,000/kWh for e2W, electric three-wheeler (e3W), and electric four-wheeler (e4W) over and above any subsidies available from the central government, with the maximum ex-factory prices being capped at Rs 1.5 lakh, Rs 5 lakh and Rs 15 lakh, respectively for the three-vehicle categories.

On the other hand, Maharashtra is offering demand incentives of Rs 5,000/kWh on 10,000 electric cars with the maximum incentive per vehicle being capped at Rs 1.5 lakh besides exemption of road tax and registration charges.

Last year, under its EV policy, Delhi had announced a purchase incentive of Rs 10,000/ kWh of battery capacity per electric four-wheeler with a maximum incentive of Rs 1.5 lakh per vehicle for the first 1,000 e-cars to be registered in the Capital state. It has also offered a waiver of road tax and registration fees on all EVs.

Upbeat about the electrification of personal passenger vehicles in India, Dhillon said, "I firmly believe that electric is the future for sure, especially also on the luxury side. We have decided that our focus is definitely going to be electric cars."

Audi India has already set a target of 15 percent of its total sales in the country to come from EVs by 2025 and will bring some of the EV models out of the 20 electric cars that it would launch globally by 2025 to India as well.

"So our focus is very clear, short term to long term. We are focusing on electric cars and we have very positive thoughts on this topic," Dhillon said.

Expressing similar views, Mercedes-Benz India Vice-President, Sales & Marketing, Santosh Iyer said, "Mercedes-Benz will play a pivotal role in the introduction of latest technologies and products from our global portfolio for the Indian customers."

The company is very satisfied with the positive customer response to the EQC since its India debut and the subsequent interest and awareness it has created for the luxury EV segment, he added.

He further said, "We already have a strong order intake for the EQC that indicates a sustained customer interest for India's first luxury EV, and the next batch of EQC is expected to arrive by September."

Globally, the EQ brand is witnessing "massive success" with the strong customer response to the EQS luxury sedan, Iyer said adding in the H1 2021, around 39,000 all-electric vehicles were delivered, including more than 19,000 units of the EQA, EQC, and EQV models.

"Some of these models will eventually get introduced for the Indian market and we are very excited about the success story of the EQ brand in India as well," he said.

However, Iyer said, "While the government focus on electrification of two-wheelers, three-wheelers and public transport is in the right direction, any additional incentives in form of reduction in import duties will enable commencement of local assembly of world-class EVs like the EQC, which will create a cost parity with ICE vehicles and lead to faster adoption of luxury EVs."

Dhillon agreed that electrification is "going to be a journey where we have to be patient and continue to work on infrastructure, apart from cars to be successful" as it is going to be a technical one.