The amount released is in addition to the normal GST compensation that is paid bi-monthly to states out of the collections made from the levy of a cess on luxury and sin goods. 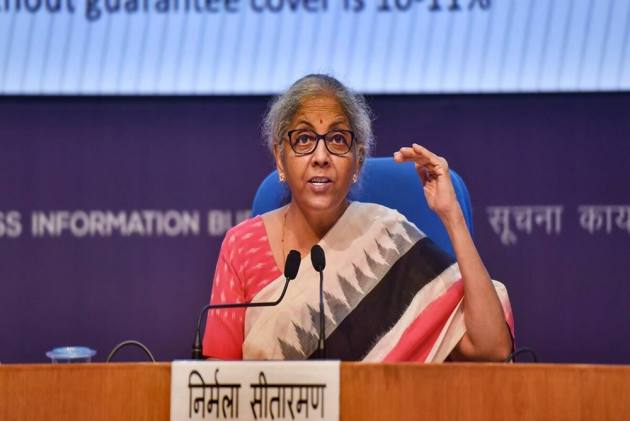 The government has borrowed and given to the states Rs 75,000 crore to make up for the shortfall in their revenues because of the GST implementation.

The Finance Ministry in a statement said the amount released is about half of the Rs 1.59 lakh crore that was agreed to be borrowed in the current fiscal by the Centre and passed on to the states and Union Territories on a back-to-back basis to meet their resource gap.

The amount released is in addition to the normal GST compensation that is paid bi-monthly to states out of the collections made from the levy of a cess on luxury and sin goods.

"The Ministry of Finance has released today Rs 75,000 crore to the States and UTs with legislature under the back-to-back loan facility in lieu of GST compensation. This release is in addition to normal GST compensation being released every 2 months out of actual cess collection," the statement said.

Finance Minister Nirmala Sitharaman in a tweet said, "Almost 50 per cent of the total shortfall for the entire year released in a single instalment".

The Centre has estimated the shortfall in GST compensation payable to the states in the current fiscal at Rs 2.59 lakh crore, of which about Rs 1.59 lakh crore would have to be borrowed this year.

The Centre expects to collect over Rs 1 lakh crore through cess on luxury, demerit and sin goods, which will be given to the states to compensate them for the shortfall in revenue arising out of the GST implementation.

Hence, the remaining Rs 1.59 lakh crore would have to be borrowed to meet the promised compensation to states under the Goods and Services Tax (GST) regime.

The ministry said in the May 28 GST Council meeting, it was decided that the central government would borrow Rs 1.59 lakh crore and release it to states and UTs with the legislature on a back-to-back basis to meet the resource gap due to the short release of compensation on account of the inadequate amount in the compensation fund.

"This amount of Rs 1.59 lakh crore would be over and above the compensation, in excess of Rs 1 lakh crore (based on cess collection), that is estimated to be released to States/UTs with Legislature during this financial year. The sum total of Rs 2.59 lakh crore is expected to exceed the amount of GST compensation accruing in FY 2021-22," the ministry said.

All eligible states and UTs (with the legislature) have agreed to the arrangements for the funding of the compensation shortfall under the back-to-back loan facility, the ministry said.

"For effective response and management of COVID-19 pandemic and a step-up in capital expenditure, all States and UTs have a very important role to play.

“For assisting the States/UTs in their endeavour, Ministry of Finance has front-loaded the release of assistance under the back-to-back loan facility during FY 2021-22 Rs 75,000 crore (almost 50 per cent of the total shortfall for the entire year) released today in a single instalment. The balance amount will be released in the second half of 2021-22 in steady instalments," it added.

The release of Rs 75,000 crore being made now is funded from borrowings of the Centre in 5-year securities, totalling Rs 68,500 crore and 2-year securities for Rs 6,500 crore issued in the current financial year, at a weighted average yield of 5.60 and 4.25 per cent per annum, respectively.

"Government of India's release of Rs 75,000 crore to States and UTs under the back-to-back loan facility in-lieu of GST compensation not to change the GoI's borrowing programme in the first half of 2021-22," the statement said.

Icra Chief Economist Aditi Nayar said, "The release of these funds from the Government of India's borrowings raised so far, corroborates the inference that healthy tax and non-tax revenues have boosted the cash flows of the central government".

Deloitte India Senior Director M S Mani said, “The release of the compensation shortfall amounts committed to states would alleviate the fiscal position of states; however, the recovery of the amounts borrowed to make the payments would necessitate the extension of the period during which the compensation cess is levied beyond 2022”.