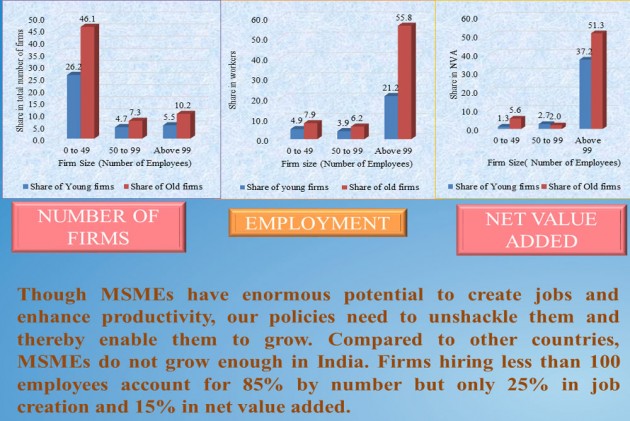 The Economic Survey 2018-19 presented by the newly appointed chief economic adviser KV Subramanian on Thursday pitched for reorienting Micro, Small and Medium Enterprises (MSME) policies of the government giving an environment for these enterprises to develop from dwarfs to giants.

The CEA in the Economic survey said, “MSMEs that grow not only create greater profits for their promoters but also contribute to job creation and productivity in the economy. Our policies must, therefore, focus on enabling MSMEs to grow by unshackling them.”

Subramanian pitched for unshackling of MSMEs so that they can grow by providing them with all size-based incentives with a sunset clause of less than ten years with necessary grand-fathering. Deregulating labour law restrictions can create significantly more jobs, as seen by the recent changes in Rajasthan when compared to the rest of the states.

Bringing the comparison, the Economic Survey said that a comparison of net value added (NVA) by MSME or dwarf firms compared to large firms shows the way. The data from the Annual Survey of Industries (ASI) for the year 2016-17 states that while dwarfs account for half of all the firms in the organised manufacturing by number, their share in employment is only 14.1 per cent. In fact, their share in NVA is a minuscule 7.6 per cent despite them dominating half the economic landscape. In contrast, young, large firms (firms that have more than 100 employees and are not more than 10 years old) account for only 5.5 per cent of firms by number but contribute 21.2 per cent of the employment and 37.2 per cent of the NVA.

Subramanian says “Job creation in India, however, suffers from policies that foster dwarfs, i.e. small firms that never grow, instead of infant firms that have the potential to grow and become giants rapidly. While dwarfs, i.e., firms with less than 100 workers despite being more than ten years old, account for more than half of all organized firms in manufacturing by number, their contribution to employment is only 14 per cent and to productivity is a mere 8 per cent.”

DK Srivastava, Chief Policy Advisor, EY India said, “The Economic Survey 2018-19 implies scope for fiscal expansion in the context of cooperative federalism. With the central fiscal deficit at 3.4% and state fiscal deficit at 2.6%, the general government fiscal deficit was at 5.8% of GDP, after accounting for on-lending from the Center to the extent of 0.2 percentage points of GDP. States can potentially increase their capital expenditure on infrastructure while remaining within their aggregate FRBM limit of 3% of GDP so as to effectively complement Center’s growth-oriented infrastructure expansion plans.”