The Economic Survey states that India is set to witness a sharp slowdown in population growth in the next two decades. 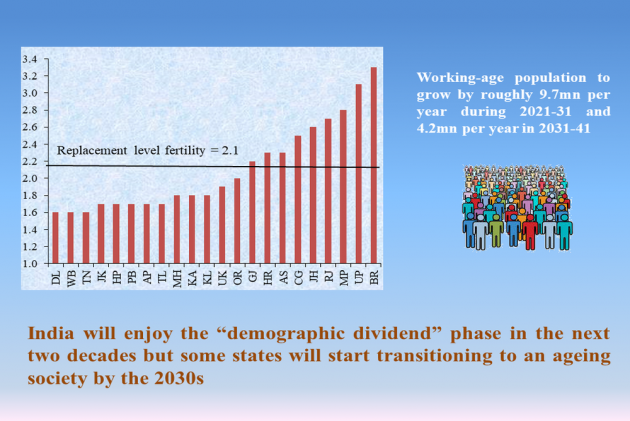 Pointing out the change in the demographic profile of India, the chief economic adviser KV Subramanian has called upon for more focus and investments on health care and increasing the retirement age while reducing the number of schools by consolidating or merging them rather than making new ones.

The Economic Survey states that India is set to witness a sharp slowdown in population growth in the next two decades. Although the country as a whole will enjoy the “demographic dividend” phase, some states will start transitioning to an ageing society by the 2030s. The age distribution implies that India's working-age population will grow by roughly 9.7million per year during 2021-31 and 4.2million per year in 2031-41.

Subramanian says India is about to witness a significant decline in the age group of 5-14 years which is an elementary school and thus India needs to plan public good for the 21 century keeping the country’s demography at 2040 in mind.

According to the survey, the population between 01-9 years has already peaked due to sharp declines in total fertility rates (TFR) across the country. The southern states, Himachal Pradesh, Punjab, West Bengal and Maharashtra now have fertility rates well below the replacement rate. TFR in Bihar, Uttar Pradesh, Jharkhand, Chhattisgarh, Rajasthan and Madhya Pradesh are above the replacement rate but are also experiencing significant declines. As a result, the national TFR is expected to be below replacement level by 2021 (adjusted for the skewed gender ratio, it may already be there).

The survey suggests that changing population dynamics of the country is important and the economists and policymakers need to take these into account while planning policies and projections. It is also important, therefore, that working assumptions and projections are constantly revised in light of new evidence (especially in the age of big data) for areas such as urbanization, energy requirements, forest cover, water availability, climate change and other long-term factors that have a large impact on the socio-economic context in which government policy interventions play out.