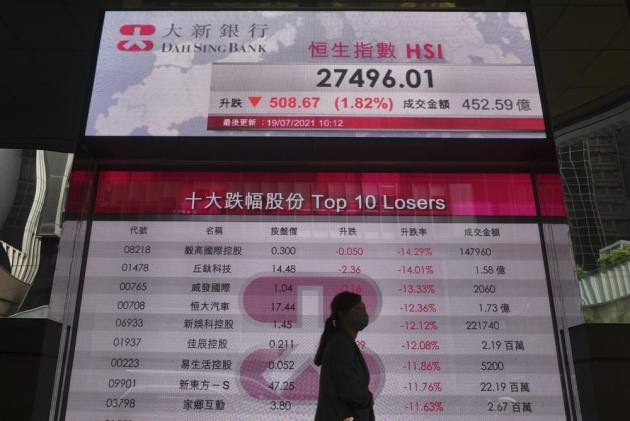 Global shares fell Monday amid deepening pessimism over rising COVID-19 infections in much of Asia.

Sensex, Nifty Eke Out Gains; IT Shares Show The Way

Rupee Falls 20 Paise To 74.77 Against US Dollar In Early Trade

Experts are saying Indonesia has become a new epicenter for the pandemic as outbreaks worsen across Southeast Asia. Meanwhile, some athletes have tested positive for COVID at Tokyo's Olympic Village, with the Games due to open Friday.

“The more transmissible delta variant is delaying the recovery for the ASEAN economies and pushing them further into the doldrums,” said Venkateswaran Lavanya, at Mizuho Bank in Singapore.

In Japan, the vaccine rollout came later than in other developed nations and has stagnated lately. Japan is totally dependent so far on imported vaccines and just one in five Japanese have been fully vaccinated.

In energy trading, benchmark US crude lost USD 1.28 to USD 70.53 a barrel in electronic trading on the New York Mercantile Exchange. It gained 16 cents to USD 71.81 per barrel on Friday. Brent crude, the international standard, fell USD 1.36 to USD 72.23 a barrel.

Iraq, Kuwait, Russia, Saudi Arabia and the UAE would see their limits rise, the cartel said in a statement.

The plan would boost their production by 2 million barrels a day by the end of this year.

OPEC+ agreed in 2020 to cut a record 10 million barrels of crude a day from the market to boost prices. It's slowly added some 4.2 million barrels back over time, and prices have risen steadily this year, though they are still way below their peak in 2008.

Investors' attention now turn to earnings. Most companies will report their results this week and in following weeks. Hopes are high, with profits in the S&P 500 expected to jump 64 per cent from a year earlier, according to FactSet.