How Inadequate Fund Allocation Is Creating A Stunted India

Data revealed by the fifth round of the National Family Health Survey (NFHS-5) once again throws light on the paradoxical growth story of India. 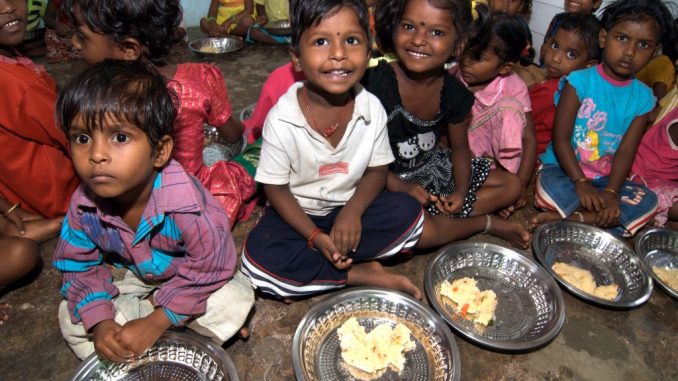 In their book Hunger and Public Action, Amartya Sen and Jean Dreze write about the pivotal role the state plays in combating hunger. The book highlights India’s example as one of the case studies where famines have been eliminated through proactive public action.

However, malnourishment is one multiheaded monster which successive governments have faced difficulty dealing with.

Data revealed by the fifth round of the National Family Health Survey (NFHS-5) once again throws light on the paradoxical growth story of India. While we have the scenario of a booming start-up industry flushed with cash and the overall economy showing signs of recovery after the pandemic-induced recession, there is another story which shows little sign of change even after years of concentrated efforts by public action. The nutritional outcome among the population—a key indicator of the nation’s overall progress and quality of life— remains on a sticky wicket.

In case of stunting (low height for age) and wasting (low weight for height), there has been only a marginal improvement from the NFHS-4 level. In India, 35.5 per cent (NFHS-5) of children under the age of 5 are stunted. Meanwhile, the proportion in Bangladesh stood at 28 per cent in 2019, down from the 42 per cent it had reported in 2013 (UNICEF).

Undernourishment in today’s children would dent our human capital of tomorrow and subsequently our future growth story. So, what explains the persistent poor performance of India on this front?

While there cannot be a simple answer to this and it is a function of many variables, the allocation of funds under related schemes and their subsequent utilisation probably would answer a part of it.

A look at the revised budgetary allocation to the core Integrated Child Development Services (ICDS) scheme (see chart) over the last 10 years shows that the programme had not received any substantial increase in its allocation until 2014-15. The year 2011-12 was an exception when a 51.37 per cent hike bumped the allocation from Rs 9,280 crore to Rs 14,048 crore. In fact, in 2015-16, the allocation was subsequently reduced until the next budget. 2017-18 onward, the allocation saw an increase which was later followed by a dip. 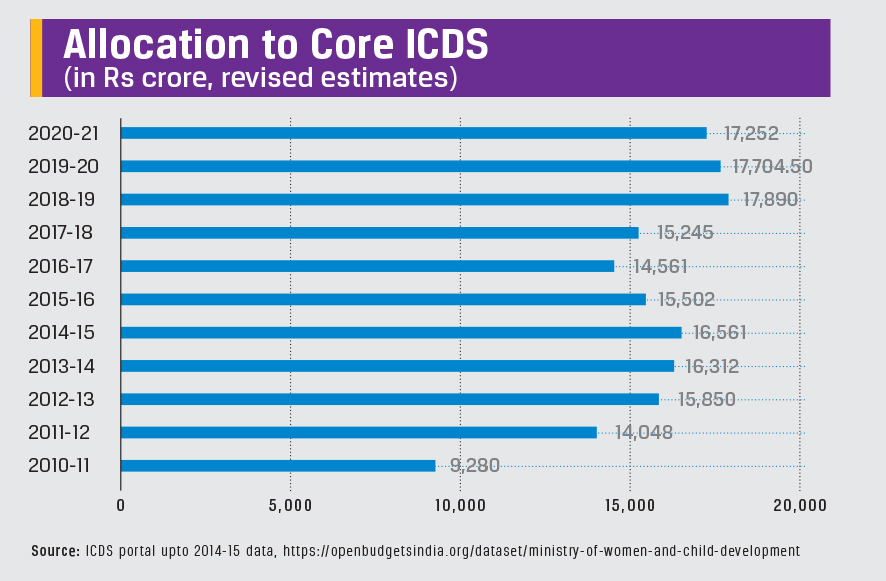 The government of India launched the National Nutrition Mission (Poshan Abhiyaan) in 2018 to put nutrition at the centrestage of development efforts. In the 2021-22 Budget, it was revamped as Mission Poshan 2.0 under which the supplementary nutrition scheme and the Poshan Abhiyaan were merged.

However, as can be seen in the chart, the pandemic gave a jolt to the scheme and in 2020-21. The allocation (revised estimates) came crashing down to Rs 600 crore, although the budget estimate was Rs 3,700 crore. The impact of the pandemic will be felt for years to come and raises the risk of derailing whatever has been achieved so far. 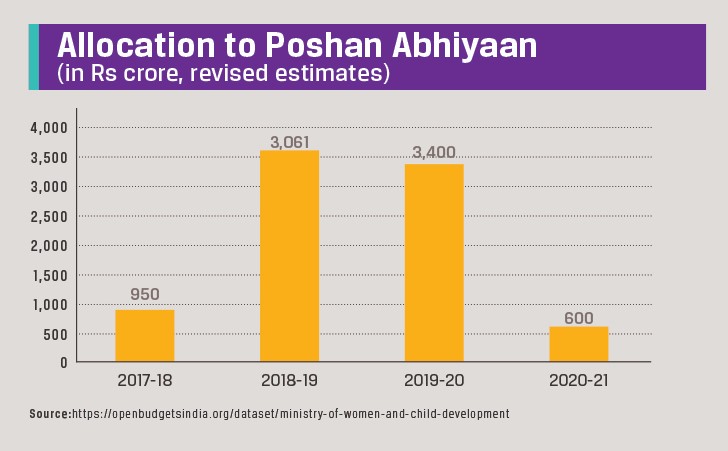 The Parliamentary Standing Committee on Education, Women, Children, Youth and Sports in its 333rd report on Action Taken by the Government on the Observations/Recommendations highlighted the issue of a constant decrease in the budget allocation to the Ministry of Women and Child Development (MWCD), the nodal ministry for the schemes.

In the recent data given by the MWCD to the Parliament, massive underutilisation of funds has been reported for the Poshan Abhiyaan by the states. State governments and Union Territories utilised only 56 per cent of the total funds released under the scheme in the last three years. States like Arunachal Pradesh (25.14 per cent), Punjab (33.62 per cent), Uttar Pradesh (33.73 per cent) and Union Territories like Puducherry (28.03 per cent) and Ladakh (31.2 per cent) have the lowest rate of fund utilisation. At 39.7 per cent, Uttar Pradesh has a higher stunting level than the national average of 35.5 per cent West Bengal has reported zero utilisation of funds as the state, which has 32.5 per cent of stunted children (NFHS-5), has refused to accept the central government scheme.

The slow release of funds by the Centre to the states has also been a common affair in case of these welfare schemes.

The government needs to step up its efforts in countering the malnutrition menace on a mission mode. With the use of a tech-powered monitoring mechanism, the Poshan Abhiyaan scheme aims to do that. However, ground work needs to be in sync with the objective of the policy. The achievement of SDG-2 by 2030 will remain elusive otherwise.