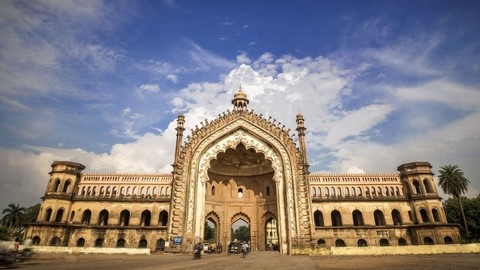 After 20 months, the Goods and Services Tax (GST) Council held its first in-person meeting on Friday. As Covid ravaged the Indian economy all through 2020, Council meetings shifted online with curbs and lockdowns being imposed to contain the spread of the pandemic.

As you walk out of the Lucknow airport, you are greeted by life-size posters of the 45th GST Council meeting with faces of U.P. chief minister Yogi Adityanath and Union finance minister Nirmala Sitharaman. The entire city is dotted with such posters. While a GST Council meeting is not a big deal, an in person one right after the pandemic is for any state, for the simple reason that it brings in business.

While the meeting was attended by state finance ministers and delegates, central government officials and Union finance minister Nirmala Sitharaman, the posters seemed more like an announcement to the hospitality and tourism industry of Lucknow to prepare for business over the weekend.

“The government is very optimistic about the vaccination programme and is keen on bringing back a sense of normalcy. With Covid protocols in place, it’s possible to slowly get back to normal. But for that, the vaccination drive has to be efficient, which is happening,” a senior government official said on the sidelines of the meeting.

As economic activities came to a standstill due to a series of lockdowns, small and medium-sized businesses were hit the hardest. Sectors like tourism, aviation, and hospitality are still reeling under the impact of the economic fallout of the pandemic.

Holding physical meetings is a way of boosting businesses in these sectors. Almost all hotels in Lucknow’s Gomti Nagar and Hazratganj areas are operating in full capacity as delegates from various states have put up here.

"These two days are good. Several officials reached on Thursday itself. So, we have been busy since then. The meeting being on a Friday, a lot of people have also decided to stay over the weekend and go around sight-seeing. This really comes as a ray of hope for tourism, hospitality, and the food and beverages businesses of Lucknow,” a hotel staff, who did not wish to be quoted, at Hazratganj's La Place Sarovar Portico hotel said.

Lucknow’s famous chikankari work was a favourite with all delegates who came from other cities. Many of them were seen carrying packets of kurtas, suits, and saris with chikankari work. "People will definitely shop for chikankari kurtas for themselves and their loved ones. A year back, it wasn't a big deal, but now all the shopkeepers are so looking forward to these few days,” the hotel staff said.

If the Covid situation remains in control, the central government plans to hold physical GST Council meetings henceforth. "We are deciding about the venue for the next Council meeting. Several state FMs are inviting us to come to their states. If we can ride over the third wave – as and when it strikes – our next meeting will also be an in person one,” a senior government official said.