Dutch investors are not sure how safe their data and technology is while doing business in China. India, therefore, becomes a natural option. 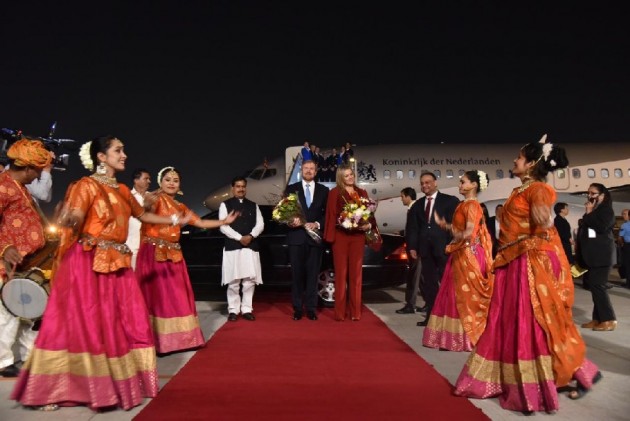 The hype surrounding China as the most favoured investment destination of the West has certainly begun to wane and if the current visit of the Dutch Royal couple is any indicator, then India may soon become a viable option compared to China for leading economies of Europe.

Netherlands’ King Willem-Alexander and Queen Maxima arrived in New Delhi on Sunday for a five-day visit during which they will hold a series of meetings with the top Indian leaders including President Ram Nath Kovind and Prime Minister Narendra Modi. External Affairs Minister S Jaishankar will also call on the visiting leader and hold discussions on areas which are aimed to boost bilateral economic and political cooperation. The royal couple is being accompanied by a large business delegation from Holland.

In June last year, the Dutch Prime Minister Mark Rutte had led a high-profile delegation with four cabinet ministers, 14 CEOs of leading Dutch companies and the biggest-ever business delegation comprising over 220 participants from Holland to India.

The two high-level delegations from the Netherlands with such large business presence certainly shows that not only the government but also the Dutch investors are looking seriously at India as a viable investment destination.

Rutte came out with a “China strategy” in May this year to deal with the alleged unfair practices of China. The Dutch PM had stressed on the need for adopting a position on China which is both “constructive and critical.”

The main aim of the Netherlands is to protect intellectual property and prevent unwanted technology transfers. Reports quoting the Dutch foreign ministry said, “When it comes to certain key technologies and critical raw materials, we do not want to become dependent on China.”

It had further argued that “the Netherlands cannot achieve its goal alone. Our preference is to act in concert with the European Union. We also rely on our like-minded partners in North America. Asia and Oceania,” the document by the Dutch foreign ministry said.

The Dutch strategy comes at a time when there are serious concerns about how the ongoing Sino-US trade war would pan out. The fact that US President Donald Trump had been seeking to use his partners in Europe as leverage by asking European countries to ban China’s telecom company Huawei for the 5G mobile technology, has only made the choice starker for many investors in the West.

It is in this larger global context that the visit of the Dutch royal couple is being seen.

This is King Willem-Alexander’s first state visit to India since his ascension to the throne in 2013. As the Crown Prince, he has visited several times as did his father, King Claus von Amsberg.

The royal couple will also visit Mumbai and Kerala during their five-day visit. There is a large business delegation, comprising about 140 business houses of Netherlands that is accompanying them and they will participate at the 25th Technological Summit in New Delhi which will be inaugurated on Tuesday. The Netherlands is the partner country for the Summit. Discussions are likely to focus on cooperation in areas of agriculture, water, healthcare and climate change.

India and the Netherlands have a bilateral trade turnover of $12.87 billion (2018-2019). It is the fifth-largest investor in India with a cumulative investment of $23 billion.

Sino-Dutch trade is over $78 billion and the Netherlands is China’s second-largest trade partner in the EU. The Netherlands with its Rotterdam seaport and Schiphol airport is important for China as it is considered the gateway to Europe and beyond.

During a meeting last year in Beijing with the visiting Dutch PM, the Chinese Premier Li Keqiang assured his visitor that China will work with the Netherlands to enhance exchanges at all levels and consolidate political mutual trust to tap the potential of cooperation and coordinate closely on international and regional affairs.

Li was quoted as saying, “In face of increasing instabilities and uncertainties in the world, China is ready to enhance the synergy of development strategies with the Netherlands, expand two-way opening-up, provide an open, transparent, and non-discriminatory business environment for enterprises from both countries, to contribute to the world economic growth.”

However, worries remain among Dutch investors. “We are not sure how safe and secured our data and technology is while doing business in China,” a senior Netherlands diplomat said.

India, therefore, becomes a natural option. He pointed out. Though India and the Netherlands are yet to sign an agreement on Bilateral Investment Protection, the openness of the Indian system, the strong roots of its judiciary, its democratic traditions and vibrant society are all an attraction for Dutch investors. The fact that India has a huge middle class, in comparison to other emerging Asian markets like Vietnam or Indonesia, a huge knowledge base and the large number of English speakers makes it so much more comfortable and easier for businessmen and potential investors from Netherlands to look at India seriously.

The visit of the Royal Couple will definitely bring the potential areas of cooperation between the two sides to focus. But to turn them into reality will need a commitment from political as well as business leaders from both sides.