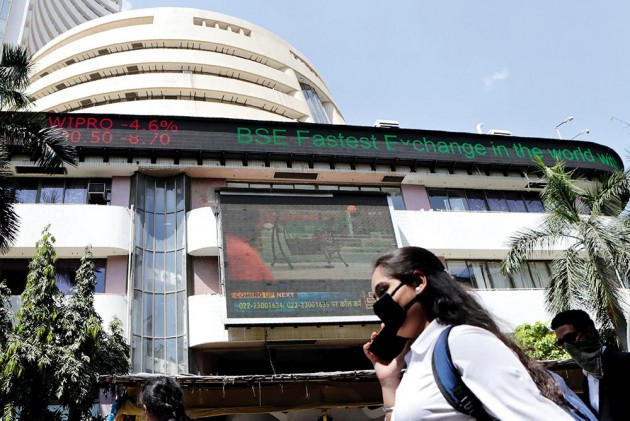 Equity indices Sensex and Nifty nursed losses for the second straight session on Thursday, dragged by IT, banks and consumption stocks, despite a firm trend in global markets.

A sharp drop in the rupee and reversal in foreign fund inflows also weighed on the bourses, traders said.

On the other hand, Bharti Airtel, IndusInd Bank, Axis Bank, Bajaj Finserv and L&T were among the gainers, jumping up to 3.75 per cent.

The BSE midcap and smallcap indices put up a good show, rising up to 1.05 per cent.

Wall Street soared to record highs after Democrats won the Georgia Senate elections, giving them majority in the Congress and paving the way for President-elect Joe Biden to implement his policies of more stimulus and increased infrastructure spending.

"It was midcap and smallcap stocks which stole the show once again and investors continued to chase this space owing to wider valuations gap and improved prospects of earnings recovery.

"An increased possibility of higher fiscal stimulus in the US after Democrats taking control of both houses in the Congress bodes well for emerging markets including India in the medium term... Q3 corporate earnings and Union Budget are crucial for the markets. We believe given sustained rebound in key economic data of recent months, Q3 earnings are unlikely to throw any major negative surprise," said Binod Modi, Head - Strategy at Reliance Securities.

BSE FMCG, IT, power, teck, utilities and healthcare indices ended in the red, while metal, telecom, basic materials, industrials and capital goods climbed as much as 3.70 per cent.

Elsewhere in Asia, bourses in Shanghai, Tokyo and Seoul ended on a positive note, while Hong Kong was in the red.

Stock exchanges in Europe were largely trading with gains in early deals.

Meanwhile, the global oil benchmark Brent crude was trading 0.02 per cent lower at USD 54.29 per barrel.

Reversing their buying trend of the past few weeks, foreign institutional investors offloaded shares worth a net Rs 483.64 crore on Wednesday, according to provisional exchange data.