Months after they the much-lauded earbuds launched, the company has introduced an aesthetically pleasing ‘Black Edition’, at the same price, to entice those who were on the fence. 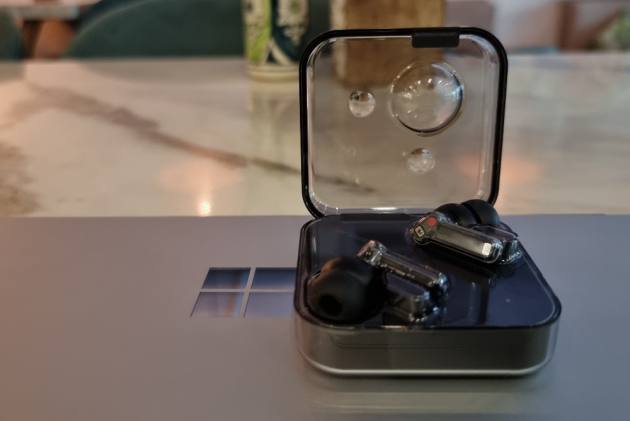 Earbuds, especially truly wireless earphones, are now ubiquitous in our daily lives thanks to the pandemic-induced work-from-home era. Entering the fray earlier in 2021 was a brand called Nothing. Nothing is a London-based tech startup started by Carl Pei, the co-founder of popular smartphone brand, OnePlus.

With the Nothing Ear (1) earbuds, the startup is trying to become the budget king. Months after the much lauded earbuds launched, the company has introduced an aesthetically pleasing ‘Black Edition’, at the same price, to entice those who were on the fence.

After using the Nothing Ear (1) earbuds for over a week, I must say that they live up to all their hype and stand out from the crowd.

Transparent AirPods that stand out

The comparisons to the AirPods (apart from being much cheaper) have been going on from day one. They are stalk earbuds with silicon tips, but unlike the AirPods, the stems are transparent. That’s pretty cool for any tech enthusiast, as it lets you look at some of the inner workings of the product.

To pair the earbuds, there is a button on the right side of the case, next to the USB Type-C port. Press and hold the button for a few seconds and a white blinking light will appear. Thereafter the connection will be seamless.

The only difference from the original buds that launched a few months ago is the colour. The case and earphones are black instead of white and even in the official app, the earbuds are now black as well. If you have trouble identifying between the left and right earbuds, then Nothing has you covered. There’s white and red dots respectively for easy identification.

The Ear (1)s are one of the most comfortable stalk-based earbuds out there and they never fell out of my ears even when I was running around. They’re extremely light in weight (4.7 grams each) and come with three different sizes of silicone ear tips for the perfect fit. Furthermore, these buds are splash and sweat-resistance.

The case (which can easily pick up scratches) is square-shaped, a departure from the traditional, but still very much pocketable and it charges via USB-C or Qi wireless charging.

The changing of a song is just a simple tap away. The Nothing Ear (1) has few but useful gesture controls. There’s a double tap to play and pause while a triple tap can skip or replay a track. If you press and hold the earbud then you can switch from noise cancellation to transparency mode to off. Finally, simply slide your finger up and down the stalk to adjust the volume levels.

The one downside is that these earbuds don’t support multi-device usage. They do however seamlessly switch between them. Each earbud can be used independently, a feature missing in a lot of other budget earbuds.

Great sounding earbuds with ANC make me a happy listener

The Nothing Ear (1) has one of the most pleasing sound qualities. While the bass may not have the extra “thump” you’d expect, these have top-notch energy to them. The earbuds produce a fairly soothing sound with good highs and treble, without a deep bass.

While for most genres the earbuds sound good and are well-tuned, there is trouble identifying instruments some jazz songs. Never play music at full volume as the Nothing Ear (1) struggles with clarity and can sound a little shrill, which will just make you want to switch them off immediately.

The Nothing Ear (1) comes with active noise cancellations that are pretty good in knocking out outside noises. I was disappointed though, that it couldn’t completely block out a loud conversation, happening four tables apart at the cafe where I’m writing this review. The ambient awareness mode or transparency mode as it is called, hardly helped while having a conversation. I had to really struggle at times to hear what the other person across the table was saying. Nonetheless, for the price these earbuds come for, I can’t really complain.

I never got the four or 5.7 hours that the company claims these earbuds would deliver. For me, I got just short of 3 and a half hours with ANC turned on.

Charging though was pretty quick, whether it was via the Type-C port (a cable is included in the box) or through wireless charging.

Should you buy these?

Truly wireless earbuds are coming into the market at the speed of light. Every day there is a new product for one to consider. Nothing stands out with their transparent design and good sounding stalk-based earbuds.

Coming in at Rs 6,999, these are some of the best earbuds you can get for the price. There are better sounding earbuds like the Jabra Elite 3 earphones that I recently reviewed but as an overall package, the Ear (1) stands out and looks extremely good at the same time.