The apex court also took note of the deduction in payments to be made to the homebuyers as directed by it last year and asked the realty firm to put its “house in order” or “face serious consequences." 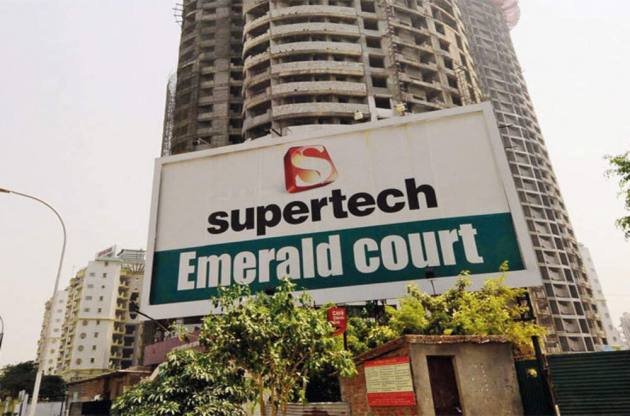 The Supreme Court on Wednesday pulled up realty major Supertech Ltd for not complying with its orders to demolish the twin 40-story towers in Noida and warned that “its directors will be sent to jail for playing truant with the court".

The apex court also took note of the deduction in payments to be made to the homebuyers as directed by it last year and asked the realty firm to put its “house in order” or “face serious consequences."

The top court will not tolerate it if it finds that the company is finding all kinds of ruses to avoid complying with the orders, it said.

A bench of Justices D Y Chandrachud and A S Bopanna asked the Noida authority to file additional documents and an affidavit giving the steps taken as on date for the demolition of the twin towers in the Emerald Court project of the Supertech Ltd.

The bench noted the submission of advocate Ravindra Kumar, appearing on behalf of Noida, that initially Supertech Ltd had proposed an agency for carrying out the work of the demolition and a reference was made to CBRI for its approval but at that stage, Supertech proposed another agency to carry out the work.

“In this backdrop, Advocate Ravindra Kumar seeks to place an additional affidavit, placing the developments on the record as on date. Parag Tripathi, senior counsel appearing for the developer, states that there is no objection to the work of demolition being carried out by either of the two agencies proposed in terms of the order of this court. List on Monday (January 17). The affidavit/additional document of Noida be circulated," the bench said.

At the outset, the bench told Tripathi, “What has happened, we are going to send your directors to jail now because they are playing truant with the Supreme Court."

Tripathi said, "My lord, with respect, there were two parties who have come up with the proposal for demolition and now a call has to be taken by Noida and the lordship may have this matter on Monday and it will proceed”.

The bench then asked Kumar as to what he had to say on the submission of Tripathi that there are two parties and Noida has to take a call.

Kumar said that the two parties include Edifice Engineering, which has made a presentation and thereafter CBRI made certain suggestions that were sent to the demolition agency. They have decided to incorporate them, and for final approval, Noida has sent it to Central Building Research Institute (CBRI) Roorkee.

Kumar said he would file the affidavit and additional documents by Wednesday itself.

Senior advocate Jayant Bhushan, appearing for Residents Welfare Association (RWA) of the project, said Edifice Engineering has made a very detailed presentation, which seems to be all right but between Noida and Supertech they just keep on telling the other to decide and place the order for demolition but nobody is doing so.

Tripathi then requested the court to hold the matter on January 17 and direct the CBRI to be present to avoid any further adjournment and the decision could be taken then and there. The bench refused to make the CBRI party to the dispute and said that it has already approved the first agency.

A counsel for home buyers said that what Supertech Ltd is doing is that they are calling flat buyers to collect the money and when they go they say that the company would pay the amount in installments and after deductions.

It added, “If, we find that you are finding all kinds of ruses to avoid complying with the orders of this court. We will not tolerate this. We want the money to be paid by Monday. Don’t do deductions which are not authorized by the orders of the court."

On August 31 last year, the top court had ordered the demolition of Supertech Ltd's twin 40-storey towers under construction within three months for violation of building norms in "collusion” with NOIDA officials, holding that illegal construction has to be dealt with strictly to ensure compliance with the rule of law.

The Noida authority had received a rap on its knuckles as the top court pointed out multiple incidents of collusion of its officials with the Supertech Ltd in the Emerald Court project and violations of norms by the realty major in the construction of the twin towers.
SC pulls up Supertech, says its directors will be sent to jail for “playing truant” with the court

The top court had directed that the entire amount of home buyers be refunded with 12 per cent interest from the time of the booking and the RWA of Emerald Court project be paid Rs 2 crore for the harassment caused due to the construction of the twin towers, which would have blocked sunlight and fresh air to the existing residents of the housing project adjoining the national capital.