According to Ocean Tomo’s Intangible Asset Market Value Study, the ratio of tangible to intangible assets has changed substantially over the years

The Indian equity market is in a rare phase where most of the valuation metrics are highly expensive compared to their long-term historical averages. Yet market participants are preferring equities over other asset classes. There-is-no alternative-to-equities (TINA) and the fear-of-missing-out (FOMO) mindset is clouding the judgment of investors who have kept the concept of asset allocation on the backburner.

Key valuation metrics such as price-to-book (P-B), price-to-earning (P-E), market-cap-to-GDP and India’s-market-cap-to-global-market-cap are way above their 10-year averages.

So, what has changed in recent times and why are these ratios showing such high divergence from historical averages? Or is there something more to the valuation puzzle than just the financial metrics?

The rise of intangibles or non-financial metrics is the big theme that had emerged globally in recent times. Brand value, customer data, human resources, software, patents and contracts are all examples of intangible assets. These are getting more weightage from investors than tangibles like land, building, machinery, cash and bond.

The Magic Of Intangibles

The growing prominence of intangibles is well reflected in the earnings multiple of companies where asset-light companies are fetching extremely high premiums to their long-term historical averages. On the other hand, companies with top-heavy asset models are trading at a massive discount to their historical averages (see table).

In the current market, companies like Titan, HDFC Life Insurance and Bajaj Finance are fetching high P-E multiples of 174, 121 and 119, respectively. Let’s try and understand this phenomenon through a few examples.

Titan, with less than Rs 1,000 crore profit in FY21, has a market capitalizationof above Rs 2.1 lakh crore at present. If you look through the prism of financial metrics, Titan’s valuation looks highly expensive but when the company is analyzed keeping in mind the nature of business (selling gold), which demands high trust, it is one of the most trustworthy brands. Clearly, the intangibles are in play here.

A similar trend can be witnessed in the case of Bajaj Finance. The company is into the cyclical lending business but is now expanding into new businesses by analyzing customer data. The latter is why it is at a high premium.

The magic of intangibles is more profound in new-age digital firms, where the financial metrics and traditional way of reporting business value have failed to explain their ‘unicorn’ status. Companies like Zomato, with virtually no tangible assets but very high brand value on the back of a proven business models, have almost the same market cap as Coal India which has a monopoly with a 70 per cent market share in the coal business.

“By ignoring intangibles, how will you explain the magical success of unlisted digital companies (so-called unicorns) that are bleeding money but are still fetching valuations much above what listed and established companies re giving,” says a former chief executive officer of a new-age digital company, who did not want to be named. Traditional ways of reporting business value are ill-suited to the digital economy, he adds. 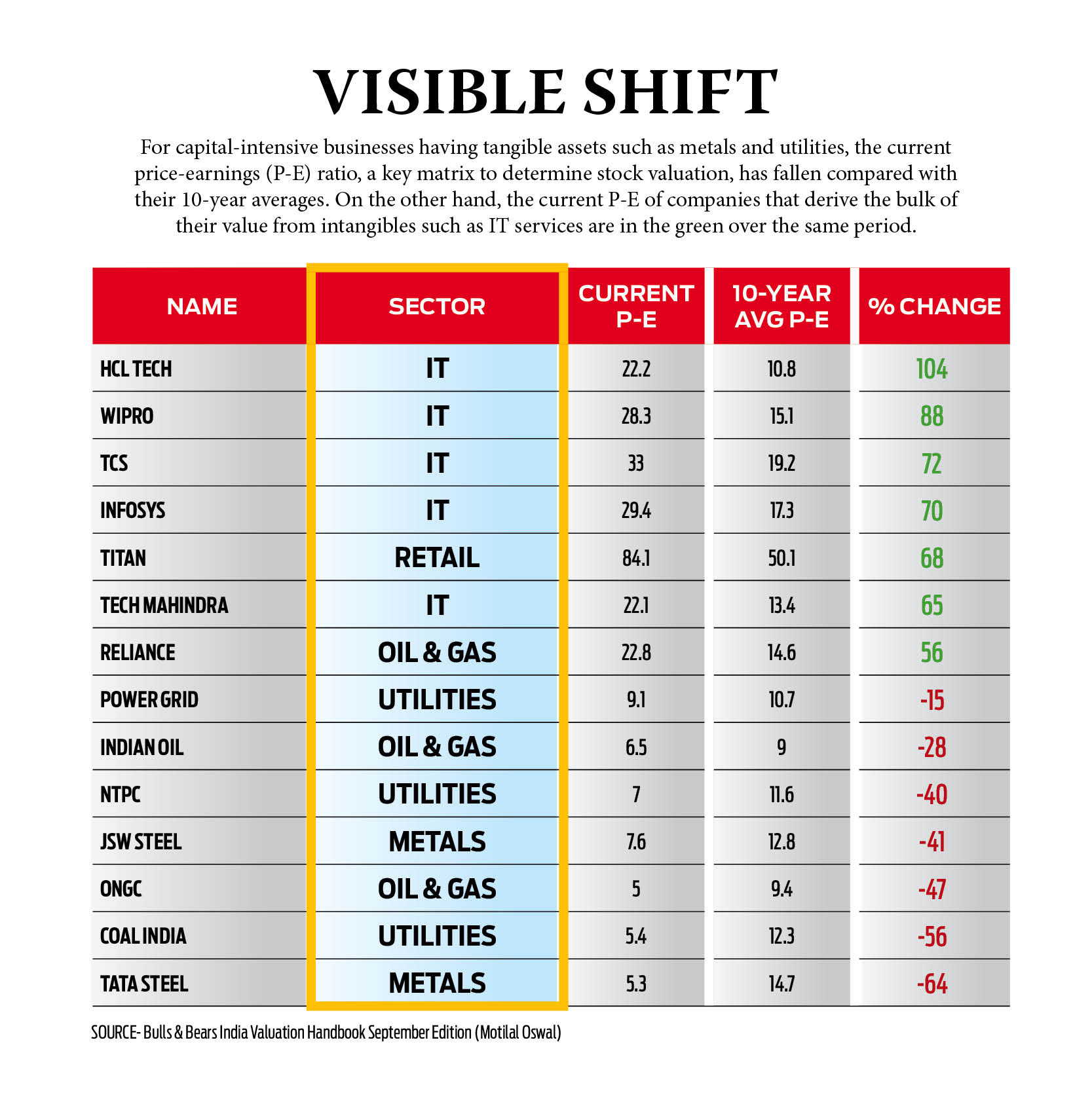 The rise of intangibles is a global phenomenon and not restricted to India. According to Ocean Tomo’s Intangible Asset Market Value Study, the ratio of tangible to intangible assets has changed substantially over the years. In 1975, 83 per cent of the S&P 500 assets were classed as tangible. That number has now fallen to 10 per cent versus 90 per cent for intangible assets.

Intangibles have gained prominence with the rapid evolution of technology. Now companies are valued not on based on tangible assets on the book but on their perceived business franchises, says the former CEO quoted earlier in the story.

If you look at the traditional financial metrics, the Indian market looks expensive as MSCI India Index is trading at 80 per cent premium to MSCI Emerging Markets on earnings multiple.

As per the Bulls and Bears Valuation Handbook (September edition), published by brokerage house Motilal Oswal, the Nifty on a 12-month forward P-B basis is trading at 3.3 times, a 28 per cent premium to its 10-year historical average, while India’s market-cap-to-GDP ratio at 111% is way above the long-term average of 79 per cent.

Indian equities are trading at 23.4 times the estimated earnings for FY22, while other key international markets continue to trade at a discount to India. Also, India’s share in the world market cap is at 2.8 per cent, above its historical average of 2.4 per cent. In the last 12 months, the global market cap increased 31.1 per cent ($28.3 trillion) and India’s market cap rose 62.7 per cent, the handbook stated.

Even though Indian markets look expensive, both domestic and foreign institutional investors are pouring money into it. And the missing piece of this massive inflow puzzle is not only liquidity but also the opportunity that the Indian market is providing in terms of companies where tangibles are taking a backseat and intangibles are driving the bulk of the value.

Investors who understood this valuation conundrum have been able to mint money in this massive bull run. However, investors who may just be running with the flow need to be cautious about their asset allocation needs.