‘Bird of Dusk’ draws upon Rituparno's personal memoirs (First Person), his interviews and conversations, and "a hundred stories from those who knew him", says Datta of her friend. 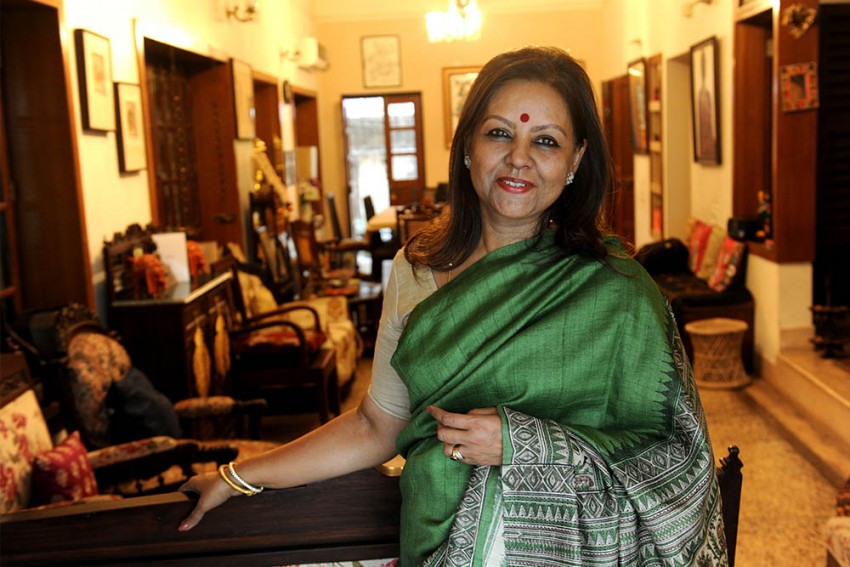 “He had a very unique mind, yet flamboyant, variable, contradictory,  was a recluse and also media hungry,” says writer-director-singer Sangeeta Datta, describing late Rituparno Ghosh, one of Bengal’s most creative, multi-faceted filmmaker, credited with having rescued Bengali cinema from the low it had sunk to in the 1990s, devoid of original themes and characters.

Sitting in her South Calcutta residence, Datta, who has captured her friend, his work and his style, in a documentary titled “Bird Of Dusk”,  speaks to Outlook about making of the film over a period of one year--and how Ghosh's work straddled a number of domains in Calcutta-- cinema, art, mass media, storytelling and gay rights activism.

“He had a way of bringing people to his films that engaged the audience in a huge way,” Datta, who knew Ghosh since she was in her late teens, told Outlook.

“He made 21 films in a career spanning 20 years, so that was how busy he was as a filmmaker — literally propelling from one film to the other,” said Datta, whose documentary takes us through the filmography of Ghosh with a narrative where his close aides and people who worked with him for a long time, express their thoughts about Ghosh and his work.

“First Person” writings…this idea of memoirs is new in Bengali literature, and is very modern…It was introduced by Rabindranath Tagore, not fiction but real narrative. You are telling your own story,” she said, adding that she is still unable to come to terms about the untimely sudden death of her friend, at the age of 49 on May 30, 2013.

“His nuanced and gentle story-telling, eye for detailing, and ability to ignite conversations on gender politics, feminism and love and desire – all within a familiar urban, middle-class milieu, is something we may never see again,” Datta said.

‘Bird of Dusk’ draws upon Rituparno's personal memoirs (First Person), his interviews and conversations, and "a hundred stories from those who knew him", says Datta of her friend, and the fascinating account of a dazzling career that was tragically cut short in mid-flight.

The 96-minute documentary was premiered at Nandan -- the cultural centre and state-run theatre in Calcutta--- on January 10, 2019, after screenings at the London Indian Film Festival and British Film Institute, Southbank in June 2018.

The film, which opens with a scene of Kolkata at night — noise, colour, movements and stillness -- provides an overview of Ghosh's career, beginning with the children's film, Hirer Angti (The Diamond Ring), which remained unreleased, nearly putting paid to his filmmaking aspirations, says Datta.

“His sophomore effort, Unishe April, which won a National Award, effected a turnaround after which he never had to look back.

“My documentary is very personal, I have no hesitation in saying that it was a personal journey…I happen to say a lot of things which are good about him and his negatives too. It is very important to look at things with its contradictions,” said Datta, whose film follows a young transgender actor Ranjan Bose as he probes Ghosh's films and ideas as part of his research work around the city where Ghosh lived and worked and loved immensely.

“His was a cinema that brought in a different perspective,” she said.

“Calcutta was Ghosh’s muse, home and battleground. It was the city that embraced his gender — man, woman and what emerges when these identities meld into each other — and was the first in India to host a gay pride parade, attended by 15 people, back in 1991. He was 10 years ahead of his time,” said Datta.

After Ghosh’s death, Datta worked on a book, Rituparno Ghosh: Cinema, Gender And Art. “Soon after, I felt a great sense of urgency to make the documentary on Ritu and his prolific filmography, and also about his stand on gender and alternate sexuality, and the courage he showed to fight on issues of identity and the marginalized.”

The Bengali cinema world, Datta says, faced a huge void for meaningful cinema after the death of Satyajit Ray in early 1990s.

“One of the biggest contributions of Rituparno was to bring back the urban, middle-class cinema lovers to movie theatres again.”

Rituparno was a colourful personality who drew and thrived on public attention even as he sought moments away from the spotlight, according to Datta.

“His life was no less creative than the chiselled screenplays he wrote, the heartfelt stories he put on the big screen and the tangible characters he lovingly etched out.

“He was a conflicted, temperamental individual but one who never failed to fill his cinema with warmth and humanism. No wonder no Bengali director in the post-Satyajit Ray generation attracted as much adulation as he did.”

On his sexuality, Datta says: “During his earlier time he was unable to come out in the open about his sexuality, and that is why he would hide behind female characters.

“There is almost a pro-feminist streak in his early films as his sympathy and apathy were with the female characters, female-driven, and he had this good fortune of getting stellar cast -- right from Sharmila Tagore to Debashree Roy, Kirron Kher, and he started off with Aparna Sen.”

On his influence to make the concept of the third gender popular, Datta said: “By the time he entered his second phase (as a filmmaker) and until the time he made his last three films which I like to call his trilogy —Arekti Premer Golpo, Memories of March and Chitrangada — where we see the ‘actor’ Rituparno, he had decided to come out in the open about his sexuality.

“He took it up as a crusade to make a political statement on the gender discussion.”

“During the university days, he was an avid reader, a complete film buff, shy in his early years, and preferred one-to-one conversations. I saw him getting bullied and teased by other boy groups simply because he did not match with the expected ‘male’ or macho codes of masculinity. There were many reasons he was different…”

Ghosh's life, at least the last 10 years of it, became a living example of exemplary courage as he came out and became an LGBT icon, she added.

On how her documentary has fared, Datta, said, “After the festival circuit, we released the film in Nandan on January 10, 2019, where it ran full-house for three weeks.”

Datta says that she reconnected with Ghosh once his early films began to generate interest outside India. After his maiden screening in the US, Datta invited Ghosh to the UK.

“I introduced him to the London Film Festival and to the British audience and the people who knew Satyajit Ray very well and wanted to know who this guy is and what are his films about.”

At that time, Ghosh was embarking on more ambitious productions, she says, referring to Chokher Bali in 2003, starring Aishwarya Rai and Raima Sen.

“I, his associate director, had also started making my own documentaries, and he wanted me to come and work with Chokher Bali since it was such a large project and was bringing actors from the mainstream Hindi cinema,” said Datta.

“For the sense of period drama, you have to have a sense of history, costumes, jewellery and the look of that particular period – like the twentieth century. We spent a huge time researching on the film. He was a very detailed researcher and had a great sense of history. It was a big bonding in our friendship.

“Our interest in cultural history was equally very strong and of course our love for Rabindranath Tagore and all things Bengali. I worked with him continuously for five projects until the last film, and then there was a gap until he did the documentary on Rabindranath.”

In his early films  -- when he had little money and had to work economically – Ghosh had to restrict his characters inside the four walls of a house and worked with just a couple of actors. He was comfortable with working on socio-psychological dramas, said Datta.

“He would also tend to get a bit repetitive...like in his early films like “Dahan”, which was on the issue of violence against women and typically violence not out in the public space but within the homes —marital rape and lack of women’s power over her own body.”

Datta remembers her friend as a very childish prankster, who could be “very silly and bitch about people…or do something very mischievous”.

“His public persona was very formidable, people were in awe of him. But in private he was very childish, like a little kid…”